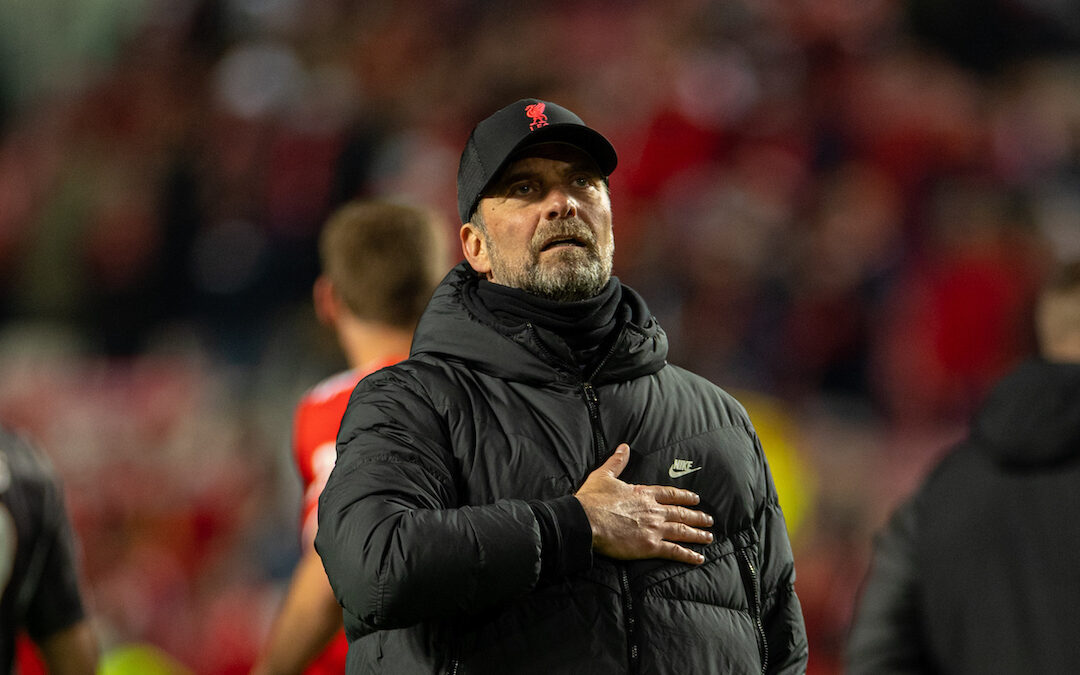 An immature Liverpool, a Liverpool we have loved, a Liverpool currently with Chelsea’s points total wins 2-6 tonight. It attacks with abandon, it quietens the crowd with the sheer force of goals, an avalanche of sweeping attacking football. It sends us to bed full of endorphins unable to sleep. It smirks, we swoon and it sweeps away European hearts and legs.

The truth is we have to manage legs here. We have to. Bringing Trent Alexander-Arnold off with two minutes to go might seem ridiculous. And it is a little ridiculous. But every minute he is sat on the bench not pacing the field is saved legs for Sunday.

You can imagine the manager. Take it easy, boys. No heroics. Go 2-0 up. Slow it down.

Liverpool know how to rest in possession. It is actually genius when you see it done. They have passed quickly for the first 10 minutes. Then they slow it down. But the problem Benfica have is that they don’t know when it will speed up again. The Portuguese side shift to a defensive shape and wait for the Liverpool attack to come. Slow, slow.

Virgil strokes the ball around as he guides the back line progressively over halfway. Slow, slow. The two banks of Benfica crouch waiting for the change of pace. Then bang, a hole, a chink of light, a gap, and Sadio Mane is there. Or Mo Salah is there. Bringing the pace and it must feel like panic to Benfica. Watching Liverpool come towards you, threatening slowly, then lightning fast. Slow, slow, quick. Here they come. Panic.

On the 17th minute the first goal is a beautiful determined header from Ibrahima Konate. He brings the ball down into the net with ferocious pace off the back of Andy Robertson’s lift. Liverpool are all possession and chances, and the timing is perfect, in the middle of a compelling half for Liverpool. Mane makes it two on 34, perfectly spaced in time between the first goal and the mid-point of half time. If Liverpool were trying just to control this game they could not do it any better.

The second goal is a marvellous thing. The ball from Trent Alexander-Arnold is simply spectacular. It’s almost impossible. It looks like a throw of the dice but it is pinpoint in accuracy. Luis Diaz’s header down looks scruffy but ends matters, Sadio’s touch home is simply the cherry on top. How do you play football against this? Benfica find themselves undone starting 60 yards from their own goal in seconds.

That is the first half. That and Mo Salah looking at odds with all phases of football while still occupying all thoughts. The second half becomes different because goals are catalysts. Goals bring endorphins. Goals change the BPM.

Konate makes a slip up at the end of some generally sloppy Liverpool play from a number of the side and Darwin Nunez is determined Liverpool will pay for it. The home fans are wild. The game shifts and Liverpool suddenly realise they are now under defensive pressure. Alisson has work to do and so do Thiago and Fabinho rescuing balls and getting Liverpool back on track.

Jordan Henderson comes on and he and Roberto Firmino help matters. We dig it out. We remain calm. Mistakes are made, though none fatal. But it is a reminder to the arrogance of first-half Liverpool that second-half Liverpool exists. We are very good. But we should take no chances. Always make sure. Take more actual chances. It can’t hurt.

The 87th minute is often a time for slightly crazy things. The adrenaline kicks in and teams that are overwhelmed can be undone. On the 87th minute, Naby Keita, Liverpool’s best player on the night, spins and surges and finds Diaz who confounds his detractors in the home stands and finds the back of the net. Have a big bowl of that, Benfica.

Liverpool look content again and from there spurn a marvellous chance — Jordan Henderson’s first time ball is somehow only the third best pass of its ilk in the game and only Trent’s brilliance makes that the case. Diogo Jota should score. In fact he should dink Odysseas but finds himself stuck between Scylla and Charybdis and does nothing worthy of the ball.

We return to Anfield with a margin of comfort, ready to hear the sweet silver song of the siren semi-finals, even if the second half of this match was not entirely comfortable.

Keep going, Reds. Keep going. You are pacing this April — this crucible in which anything is possible and everything is in the mix — so well. Dance on the many dancefloors. Keep the beat right. You are showing astonishing maturity, Liverpool.

Sunday is the everything. The universe bends towards it.

“I’m so happy we got the pay off at the end there, it was some celebration.”