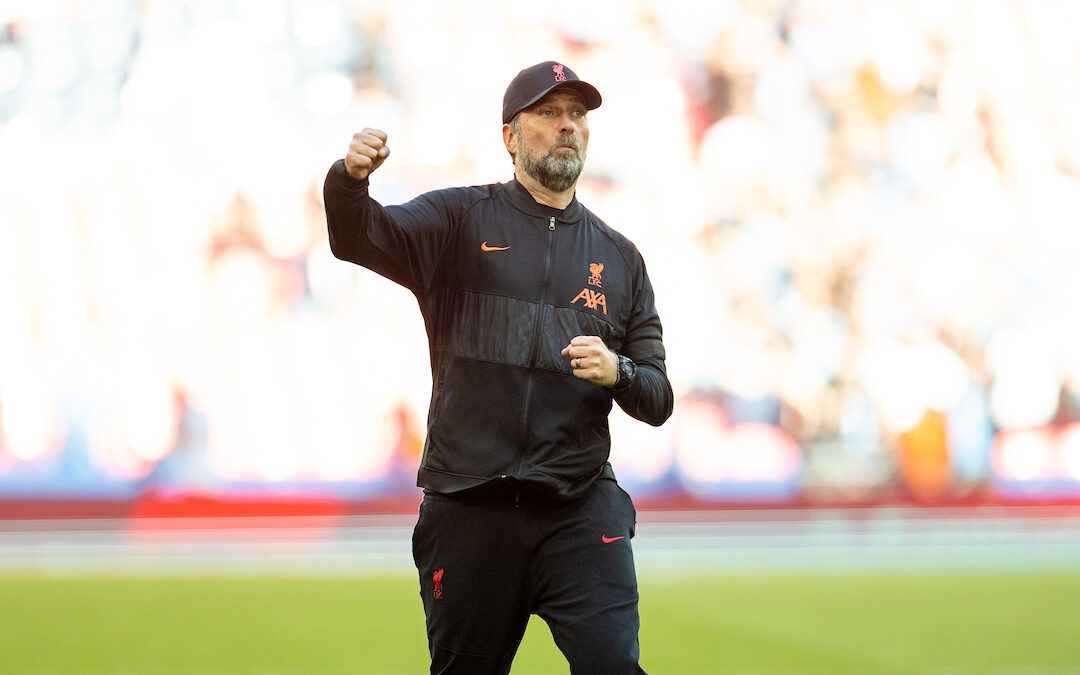 LIVERPOOL face Manchester City and Liverpool are much the better side.

These are the two best teams in the world and Liverpool today make clear what they can do.

It’s important and needs dwelling on beyond any chat around their selection, our selection, their midweek, our midweek or even either of their second half goals.

There is a recent history with this fixture where either side gets itself two or three clear by the hour mark and then it is all over bar the shouting.

Pep Guardiola and his side know that when the teamsheet goes in. They and he have lived those games. They know the ropes.

And then, yet again, they get educated about the reality of facing Liverpool. They are left in no doubt.

Doubt is interesting. Last week, for the first time this season arguably, Liverpool showed doubt. Even when they struggled against City at home it wasn’t quite about doubt. It was certain things not working. Liverpool, who have only lost three games in all competitions all season, haven’t really been beset by doubts even when they have been dropping points.

But last weekend there was, for the first half, doubt everywhere. It was strange to see and it was testament to our opponents. They did that. They brought that about.

Today there was the opposite. Liverpool rocked up and everybody knew their jobs and executed them perfectly. That isn’t the same as played beautiful football and nor is it the same as created chance after chance. It was that, for 45 minutes and most of the second half, all the space, all the control belonged to Liverpool.

It’s worth dwelling on, this — how good is Liverpool’s operation that they can change this in all the ways that matter in a week? How smart are these players? This week Liverpool seemed far more aware of what threat is and can be. They made life so uncomfortable for their opposition over and over.

A goal always helps. The early Ibrahima Konate goal from the corner was a marvel. Watching the replay back it seemed oddly inevitable — an enormous determined force making contact with a ball perfectly placed. It looks like a tide coming in, like a sun rising. Of course, you say. Of course.

A goal always helps. Suddenly Manchester City were all at sea and Liverpool were all in the ascendancy and the Sadio Mane goal closing down Zack Steffen just reinforced it.

Sadio is suddenly remarkably integral to Liverpool’s campaign. What he offers through the middle is unique in world football. He isn’t a pure nine and nor is he a false one and he isn’t a 10. When he played wide left he often did it like a centre forward who found himself there and, now he is the central forward, he goes about his business with facets of being a winger who is there. He is complete like a Swiss Army Knife and he can become whatever is needed in the moment.

In 1989-90, John Barnes ended up there for Liverpool and it is hard not to see the parallel.

In the week on The Review, we talked about Naby Keita playing right of the three and that he often goes very aggressive indeed and leaves space behind. Today he did that but the key thing was — on Naby’s own instigation at times — all his teammates came with him. There was no doubt and repeatedly Naby instigated the press. The space behind was compressed and Manchester City couldn’t get out.

It was Keita’s best 45 playing for Liverpool. It has been remarked upon here how in Aprils past the manager has turned to him. Today the sole reason he doesn’t make the 45 a 90 is that he had put a load in against Benfica. But in that first period there wasn’t a player on the pitch who could live with him.

Ibrahima Konate scores the opener irresistibly but that isn’t the end of him being irresistible. He has every Mancunian challenger in his back pocket. They are second to him on every occasion.

Thiago Alcantara may as well have cited this game as his reason for coming in the first place. He had a ball. He’s a sumptuous proposition, he really is. He spends the whole game using his eyes and his head because his feet have it boxed.

Fabinho showed the value of a small amount of rest and was the one Liverpool player who grew into the contest across the 90. Conceding the goal early in the second half saw Liverpool understandably reconsider matters.

But it was all over bar the shouting. You worry, of course you do, because you know they are good and have heavy artillery on the bench but even that becomes a signifier — their gaffer knows that the way it is on the hour is the way it will be. He knows Brighton on Wednesday will be tough. He knows where his bread is buttered.

For us, we know we will, for certain, play every game it is possible for us to play this season bar one which we can still secure. One that could be against today’s opposition, one where we have made crystal clear we will take some beating.

We will take some beating. We look exceptionally difficult to beat currently. Because we suffered last week but we did it far better than them. We will have to suffer but we are good at that.

But not only will we take some beating today we made this clear too — The Reds are mustard again. They have it in their back pocket. They have so many qualities: resilience, certainty, determination, purpose. Today, for the first time in a while, they added “mustard”.

The Reds are mustard again. And now, now, now on BBC1, now at Wembley, now you are going to believe us. It doesn’t get better than this.

Go and dance on many dancefloors. Because what comes next will be marvellous.