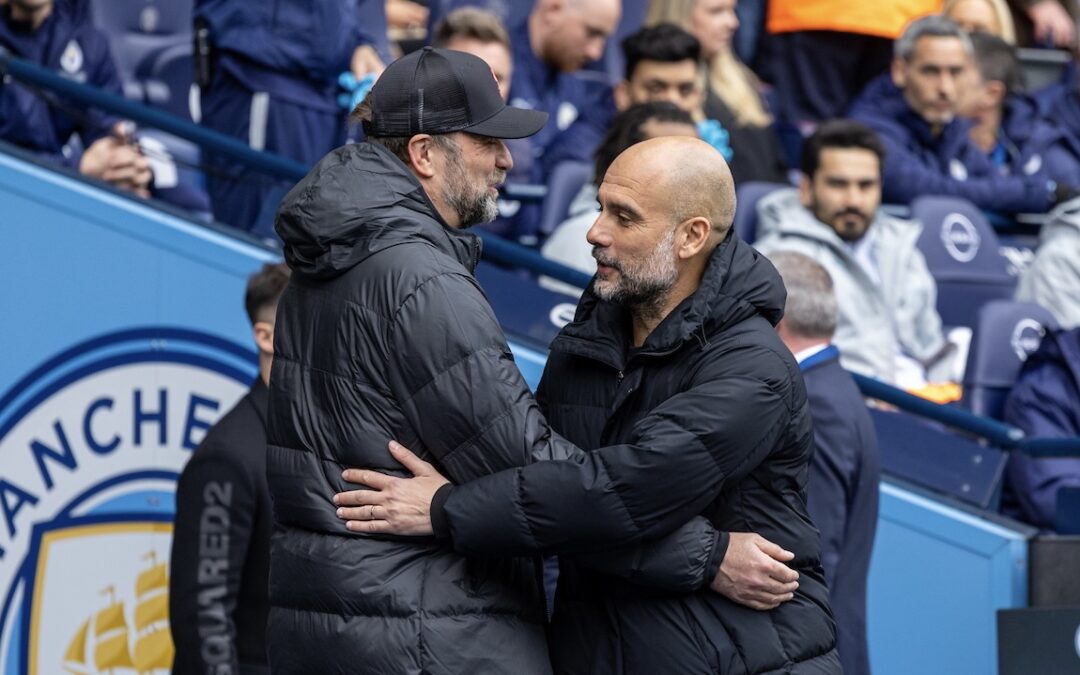 THERE they were. The two best in the world.

But for the first half there was one best in the world and Manchester City deserve all the credit for that. If I were them I would simultaneously be awed and annoyed. Awed at the quality and annoyed at the fact they didn’t take the game away from Liverpool.

I mean god, the one thing you and I did not want to happen was for The Reds to come out and play like that in the opening minutes. Nerves are the worst. You want them to come out strong, dominant, but we were nothing of the sort. The game could have been taken away from us and we would have had little argument.

Prior to the game the manager said we would suffer and I concurred. Suffering was on the agenda. But not quite like that. Manchester City struck at the bedrock of Liverpool — they rattled, in possession Alisson Becker, Virgil van Dijk and Fabinho. The rattling wasn’t as straightforward as closing down or hard tackles, it was the removing of options and the dangling of carrots in equal measure.

Manchester City set traps, created possibilities and made Liverpool wonder and question. They knocked the certainties that Liverpool have built the run on. What brought Liverpool to the party nearly brought them to their knees.

What made this exceptionally impressive was that City had grabbed an early goal but Liverpool had replied. Equalised. Pinned them back. But at 1-1 the Champions showed their class.

De Bruyne has to be pleased with his performance, and especially that goal at the five-minute mark. He saw that Liverpool were disorganised and made the most of it but that was what he did throughout the match. Allows us to fumble the ball, scoops it up and show his pace. He is deceptively quick, not dissimilar to a Luis Suarez. You don’t get back when he is gone.

It is what Diogo Jota has become this season. The player who exploits weaknesses in others and is deceptively quick. Jota is there, and when he finds a hole on the 13th and hits the back of the net, for a quick second. Jota though flits out of the game whereas Big Kev remains its fulcrum along with Rodri, especially first half.

We get squashed into corners over and over in that first period. Fabinho, Henderson and Thiago are trying to break out but they get broken down. We give the ball away.

City have a play that works. Tip the ball over the top and find a runner. They have pace and their passing is tight so, of course, it works. It takes Virgil van Dijk and Joel Matip till the second half to work out that they can defend against this by pressing back and accepting that we are not going to win the possession war here. We have not been used to defending against sides that attack as creatively and as fast as we do. We learn. But not quickly enough. Before long, Manchester City have broken through again, this time with Jesus staring Alisson in the face before blasting the ball over his shoulder.

We go in 2-1 down, and this huge game now needed a huge half-time turnaround. We needed to get those heads in a different place and start this again.

That’s what Liverpool do. They leave the first half behind them and start again. Quicker to the ball, more shape, more determination out of the blocks. As a result Sadio Mane pulls us level and while we never feel like we are on even terms, the tackles are flying in and Liverpool have lifted their game. Defensively, we clear more lines, work out where on the pitch we want to be if the high press isn’t available to us, and most crucially, we pass better.

We get better at space. Manchester City, and I mean this with all love and respect, play their game first half around yardage. They make their decisions based on what is where like no side I have ever seen. They are the blitzkrieg side, the territory side. We are the ones trying to be quick in possession.

But second half we get better at space, we work out the lines and we work out the lanes. They couldn’t keep it up in one sense but they couldn’t stay smarter than Liverpool throughout. Thiago Alcantara stands up first, Fabinho and Henderson follow. Virgil van Dijk improves markedly. The full backs influence the game.

From the Sadio Mane goal to around the 80th-minute mark Liverpool seem just a tiny bit likelier to find a way. Rodri is less imperious. They have a disallowed goal for offside, and well-timed substitutions help us hold them off.

From 80 the subs work for them more than us and while we do enough to stop them winning we don’t create the chance I was expecting.

I wanted to win. But it will do. And for The Reds on the pitch as well as Reds all round the world, we breath a sigh of gratitude that 11 players plus substitutes and the management were able to find enough of a tactical approach, mentality and outlook that we got out of there with a draw.

But more than that — a sense of gratitude that we can breath this rarified air. A sense that this is precisely where the best of the game is right now and we can have our say. We can hold our own. We can learn from this.

And we can still win this league.

That is the core of what we have lived through. Liverpool’s title hopes have not gone anywhere. A win always helps but just like October in the reverse fixture, the home side got ahead twice and got pinned back twice.

We can still win this league.

We have huge games to play before April is out. That was as true yesterday as it will be tomorrow. A lot learned by The Reds today. A lot yet to learn for all of us.

I’ve learned Liverpool aren’t messing about, aren’t going to go quietly and that they are battling with the best but know they can find their way against the very best. They know how to suffer. The suffering is there for us all. But so still will be the reward once it is done.

We can still win this league. Just don’t expect it to be easy but make sure it is fun. Today was climbing the mountain and jumping off and the landing hasn’t hurt. Just. Enjoy jumping off the mountain. Enjoy what comes next.

We can still win this league. Time to run to the line.

“It’s a really good point, everything is still alive from a Liverpool point of view. We’ve still got to win every game till the end of the season.”