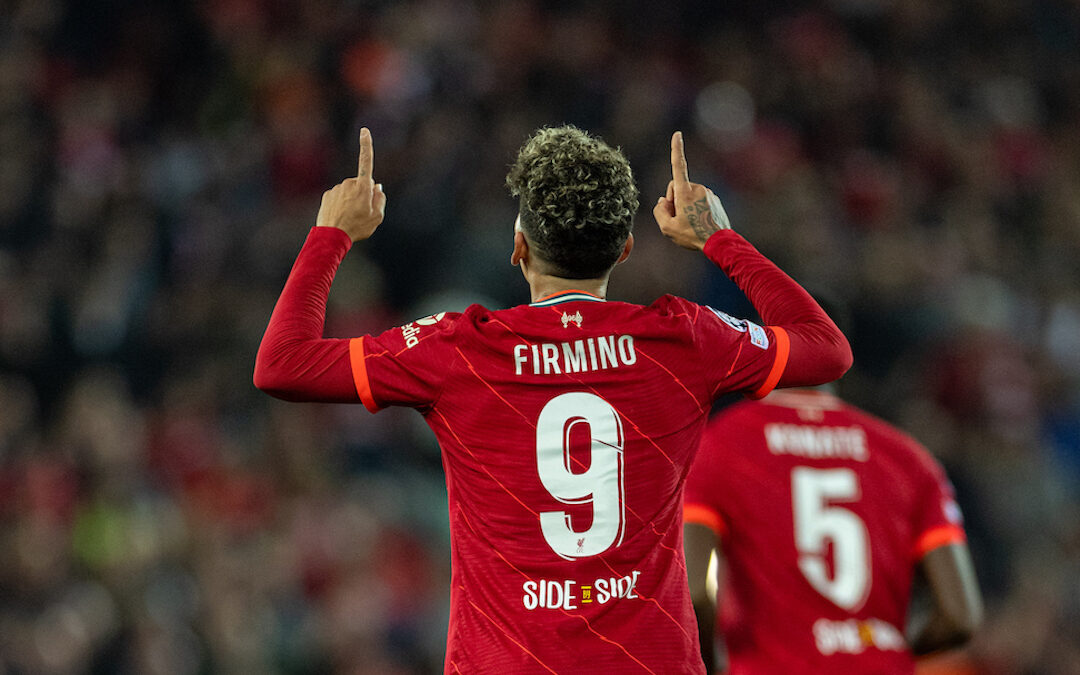 OK. I hope I have cause to do this again. But I am doing it now. Early in this one. No messing about.

Roberto Firmino is a wonder.

It is more likely than not that the 2023-24 season starts and Roberto Firmino doesn’t play for Liverpool.

It is possible the 2022-23 season starts and Roberto Firmino doesn’t play for Liverpool. Unlikely I hope, but possible.

I would take Roberto Firmino out for a week. I would dance on every dancefloor going. He has lit up so many occasions for us and, though it is difficult to conceive of, there will come a day when I am in a location and he wants to do shots and I am there for it.

I’m there for his graft combined with his steel. I’m there for him finishing sumptuously, and missing irresponsibly, and winning the ball back after a bad touch, and setting Mo Salah in motion after a great touch, and him seeing the pitch in widescreen and technicolour, and him slowing it down, and him speeding it up.

I’m in it for the twist of the hips and the dip of the shoulder and he’s gone, the mate on the night out you can’t pin down, the centre forward of your dreams.

Liverpool go through tonight and the manager’s team selection told you they would. There is this thing where everyone says “well this is a gamble” when he picks his side on nights like this. I don’t think he is that much of a gambler; he is a man who is, in his big thinking, radical and dynamic but, in his small game to game thinking, small c conservative. And his thinking told me one thing “we’re going through here”.

It ends up feeling odd; conceding three, the offside trap pulling its punches, some vague sense of possible jeopardy. But the tie is finished as a contest when it goes 3-1, when Firmino converts Kostas Tsimikas’s delivery, when Liverpool’s players celebrate in two equally delighted silos — Thiago and Joe Gomez so pleased for the left back.

Tonight Liverpool start having made seven changes from City but finish with only two players having played 180 — Joel Matip and Alisson Becker. Everyone else has had some form of rest which is fascinating with Saturday and Tuesday on the horizon.

The manager is arranging his dancers for the dancing still to come, and that his changes on 55 were big hitters didn’t come as a surprise. It is as much about keeping them ticking as anything.

But it also shouldn’t come as a surprise that Liverpool were disjointed, this time defensively more so seeing Benfica manage to gamble and succeed in getting in behind.

Much of this also came in the phase were Liverpool were less intense — 3-1 ended it. But it will benefit Liverpool to have the tape.

Starting and ending with Roberto Firmino, it is worth observing that the Liverpool he arrives at would never have felt the slightest bit blasé about a Champions League semi final.

And nor should we. This is some season coming in among some other incredible seasons. But this is what we have all been waiting for, working for in some instances. Demanding and hoping. It is Jurgen Klopp and Roberto’s third which doesn’t allow for the season they played in a Europa League final or the season we weren’t in Europe. It is some record. It is some team.

Today they’ve confirmed that the season is alive, for certain, until the first week of May, for one of the big ones. They’ve given us the best chance of everything. They’ve done the decent thing.

What a trick. What a time. What a side. And what a number nine. He’ll always do for me.

“We got the job done tonight, it was a bit mad! It felt like we were having a bit of a competition with VAR! For me, the game is finished when Firmino makes it 2-1.”