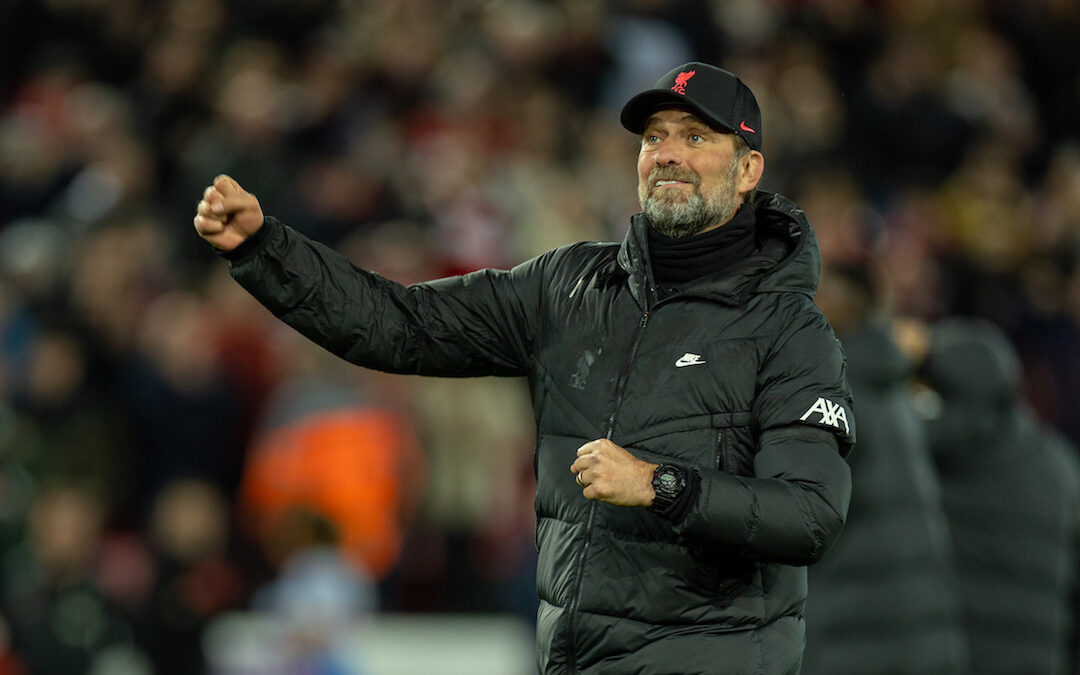 IN a sense, the whole game is in microcosm for the opening goal.

The opening goal is both otherworldly but one you feel you have seen a hundred times before, and one which you saw coming in the seconds before it arrived.

Of course he will drag him there, he’ll shift there, we will overload there, we’ll be in, the ball will be perfect and the run spot on.

Saw it coming. Seen it before. Best I’ve ever seen. Can I watch it again?

Liverpool were otherworldly and incredible, and yet everything that happened in the game was completely predictable. You’d seen it all before. And when you saw their teamsheet and ours you suspected you were going to see it all again.

The second goal and David De Gea summed it up again. Liverpool undressed Manchester United across 20 passes. They went this way and that and finally Sadio Mane brilliantly found Mo Salah, and Mo Salah slotted and De Gea’s body language could be best summed up as a man who thought it was all unfair.

From there I was left reflecting on the fact there should be a word for being annoyed with your team being that much better than their opponent they start to gild the lily too much.

It wasn’t complacency as such, it was just enjoying themselves that much they almost lost sight of the overall target. Everything came so, so easy for Liverpool.

In the second half there was the beginning of slight misgivings, as Manchester United found a way to at least get one foot in the Liverpool half, but Liverpool soon put paid to that with their third. It was another excellent goal and the first time all of Luis Diaz, Salah and Mane have scored in the same game.

It seems remiss not to reflect on all three as all three were excellent. Salah was just constant danger, Mane constant menace, Diaz constant outlet. They are like playing with four or even five at times. There are always present, even if they aren’t in the game they are on the verge of being in the game. It’s a constant broiling potential.

It may seem remiss but we have other things to do. We have Thiago Alcantara to do. We may well have Thiago Alcantara to do for the rest of our days. I’m of the view that I’ve seen some great midfield performances. But that had absolutely everything. He was hypnotic, there wasn’t a thing he didn’t do brilliantly. His interceptions were through balls. His tackles were dribbles. He was first to everything and then repeatedly undermined every opponent, he found new ways to beat people.

But more than anything it is his brain. He plays the game like he has watched it back 10 times, like Bill Murray in Groundhog Day answering the quiz questions before they are asked and anticipating every move.

Because the truth of Manchester United’s powerlessness isn’t just about physical capacity, it is about brainlessness. Liverpool are splendidly educated, have players who are open to that education and then have Thiago Alcantara for whom the game is a Rubik’s Cube he solved years ago on nights like tonight.

You can’t outplay Liverpool, outfight them and nor can you outthink them. They are Shane Warne setting you up, watching you set yourself up over and over, and before you know it the stumps are akimbo.

United aren’t capable of dealing with it and only a tail-enders fortune and a period of disinterest stopped it being a cricket score.

Liverpool march on. They stride on. There will be no airs and graces on Sunday. It will be more brutal than today, no one will be kidding themselves when the blue brethren turn up at Anfield. But this side look like they have all the answers at the moment.

Whatever happens from here. The tightrope still needs walking. Every game will be fraught. One trophy to four trophies, everything still possible.

But today Liverpool didn’t just walk the tightrope, they performed cartwheels on it.