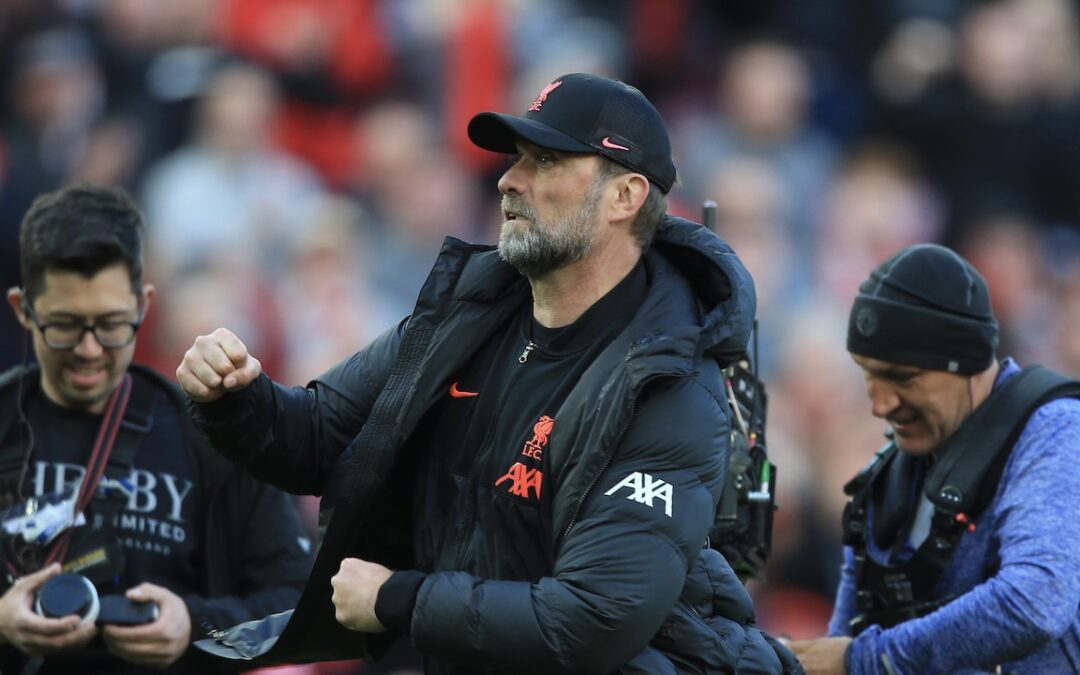 Neil Atkinson’s post-match review after Liverpool 2 Everton 0 in the Premier League at Anfield, and The Reds find the best way home…

THERE are few abysses left to look into.

But that one, that one was deep. That one hurt to look into.

The truth is that football matches last 90 minutes and what Everton were doing never quite had 90 minutes in it, but that doesn’t mean that everything felt rosy on 55.

There can be multiple analyses of a game like that. I am all for the idea that the game can be played absolutely any way and you do everything you can to win, and therefore I am not taking a moral view on how Everton approached the contest.

There is an issue where your best way to get a result in a football match is by doing everything possible to ensure as little of it happens as possible. Reaching that point isn’t a great moment but everyone is where they are.

We are where we are. One of the best two teams in the world. They are where they are. The 16th, 17th or 18th best team in the division. But we go in at half time frustrated by Everton.

There was time-wasting, play-acting and anti-football in abundance. The dogs of phoney war. We though didn’t rise above it. We found our rhythm disrupted — passes were too slow and slightly astray which for us is much the same thing. Mykolenko did well against Mo Salah, Diogo Jota couldn’t get in it and Fabinho couldn’t progress it. Anthony Gordon was dangerous and Alex Iwobi showed what he has shown recently.

The change is phenomenal. Divock plays his part in the opener and scores the second, looming one more time in front of Jordan Pickford in the flesh in the way he must in Pickford’s nightmares. Imagine being Pickford for that second as the ball comes across and there he is. There he is.

It is a career to never forget. He is the man for the biggest occasion, the man who arrives when glass needs to be broken. From the bench you are overwhelmed by his presence and pace, beguiled by his touch and staggered by his instincts. He is a wonder.

Pickford had already been breached by the man who had best dealt with the first half in Andy Robertson. Robertson gets his moment for this season and he reacts like he should. It is a brilliantly economical finish and a celebration of sheer wonder and sinew. I always remember Andy Robertson in front of us at Goodison in 2019 after they got their draw shouting “take no notice of them” at us. A man who understands what a derby is. Feels it in his bones.

Mo Salah was the business second half, everything revolved around him. Everton were constantly overloading his side which provided the room.

But the goalkeeper. Post match I got this message from a neutralish friend of the show:

“This has been sensational. They’ve tried to make your life as miserable as possible for 90 minutes, done it quite well and yet the punchlines at their expense are still genuinely very funny.”

The goalkeeper, when he displays brilliant comic timing, just makes the point brilliantly. This stuff, this nonsense, it has a limited shelf life. You can’t keep doing it forever.

Everton have been doing too much messing about for far too long. Since the under-scrutinised arrival of Farhad Moshiri there has been so much messing around; almost every decision Everton could make they have got wrong. They have been the club of wrong moves.

Today they at least had some moves but they were ones with diminishing returns. And there suddenly is the very real prospect there is no Anfield league derby next year. Rolling around clutching your face is not a way home.

For us, we keep the pressure up. We have navigated two theoretically tricky homes and have a tough away on the horizon.

How many hurdles are left? Who cares. We cleared this one and I feel fine.