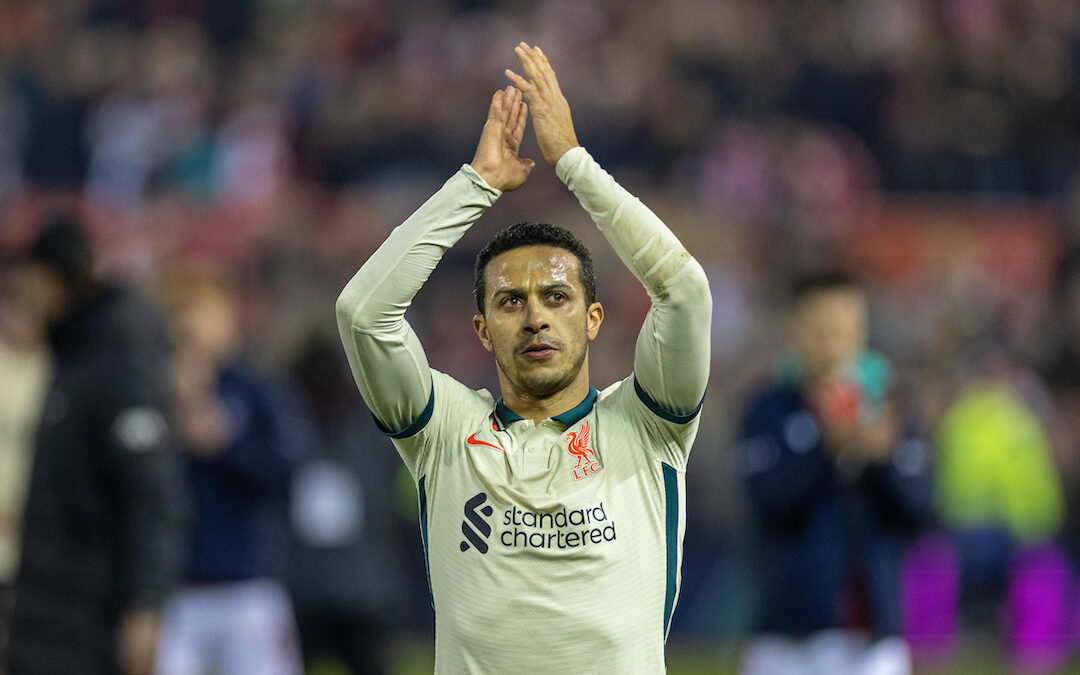 IT could have been something close to a procession had Roberto Firmino opened the scoring. But it becomes a serious contest.

As ever, there is this thing within matches around changing the times of the key events. But there is also a thing where Liverpool respond to the key events. The best chance of the game for Nottingham Forest is followed by a Liverpool goal. The same happened on Wednesday and has happened at other phases this season.

It’s a genuinely excellent performance from Nottingham Forest. They react to the key events well too — they get in at half time and shift from just containing Liverpool to being able to hurt Liverpool. They manage something few sides do which is to pull Virgil van Dijk into places he doesn’t like. Ibrahima Konate is excellent under the circumstances and Liverpool are fortunate to have him.

There is an odd thing with the first half setup: Liverpool have two key absences from the right hand side and then add further doubt with Alex Oxlade-Chamberlain and Harvey Elliott. The pair seem to take turns as to who is right-sided forward. The fluidity doesn’t help — there is such a thing as too much flexibility. Then the shape changes to a 442 and there is clarity but not much quality.

It demonstrates how finely oiled Liverpool are. The way Liverpool play isn’t a plug and play move; it is bespoke, built around remarkable qualities. You take out Mo Salah, Trent Alexander-Arnold (and, yes, Jordan Henderson) and everything gets harder. Over time that would change. But no one wants that time. It isn’t in our interests.

Diogo Jota flashes for the first hour but doesn’t look to have the full rattlesnake vibe. But he finishes when the chance comes with aplomb. It’s a tremendous finish — he guides it over the line rather than force it. He finds the net. Kostas Tsimikas’s right-footed ball in fades beautifully but Jota still has so much to do.

Jordan Henderson and Thiago Alcantara both play well. Alisson Becker is the business and it was never a penalty. Firmino jinks and links.

But the truth is the game is shaped by Forest’s sheer desire to make it a contest and Liverpool standing up to that in every way apart from getting things right around the penalty area.

For Forest it will feel like a decent audition should they match their ambitions this season. They have gone toe to toe with Liverpool and can feel they had hard lines.

For Liverpool, though, it is about setting up a glorious April. Your correspondent has long argued a good season is one which is still alive in April. Well, no season has ever been more alive as the clocks move forward. No season has ever had as much going for it at this stage. Only 1977 matches this and that year Liverpool didn’t already have a trophy in the bank.

It’s important to understand this and reflect on it. No Liverpool team has ever been as present in this moment as this one. Leagues have been run away with. Europe has been the only target. But no one has been so much in all the here and now as these lads.

Tonight and through this international break, that is what we should hold close to. It wasn’t pretty. It was a battle. But we love that. They can end the season with one trophy. They can end it with four. That normally is never the case beyond Christmas. But Liverpool have an FA Cup semi final on Easter weekend and I bet you they are still where they want to be then.

Into these. All of them. Across the board. April looks incredible. Let’s make May better.

“A few hairy moments but the important thing is they’re through. Off to Wembley again, and the quadruple dream is still on!” 🏆🏆🏆🏆