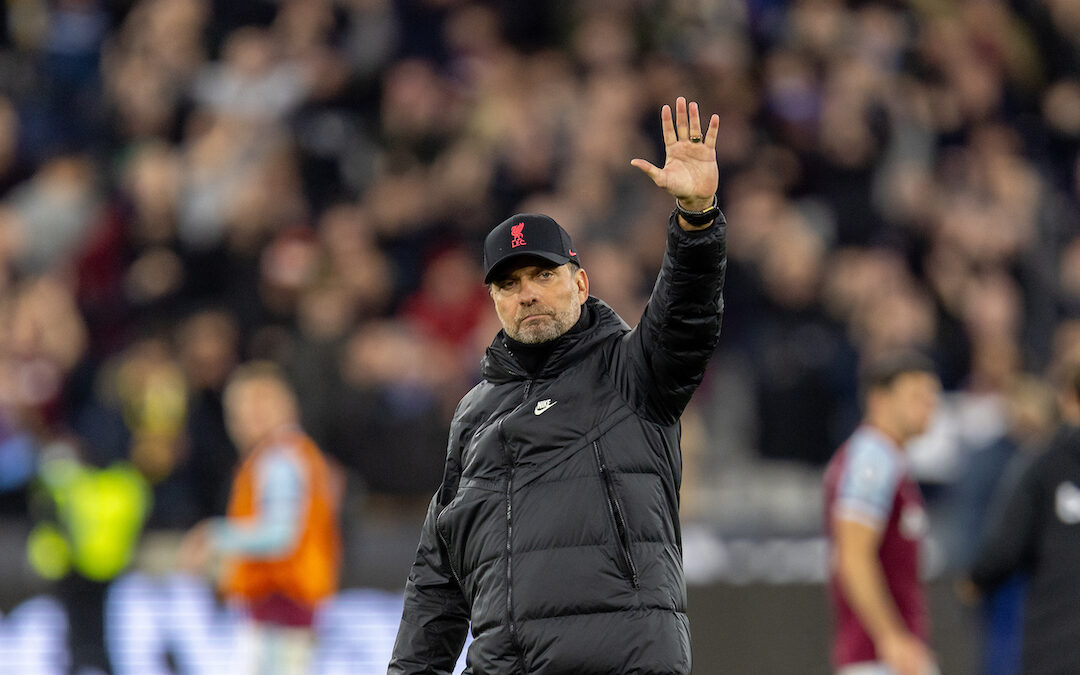 Match preview ahead of Liverpool v West Ham United in the Premier League at Anfield, a big challenge for Jurgen Klopp’s Reds to face…

JUST had a look at Liverpool’s results through February, there. Would recommend you all do the same before proceeding.

It really is a thing of beauty, this run The Reds are on. They’ve been putting teams to the sword pretty consistently now since mid-January — around the time concerns around the Omicron variant started to ease and cases started dropping again.

I mention that context because it feels important to do so. Liverpool Football Club seems like one of the best places on earth to be playing the sport right now, but just 12 months ago the same wasn’t exactly true.

“It was an incredibly intense season and, yes, I was more than happy for a holiday,” Jurgen Klopp told the Daily Mail ahead of the League Cup final. “For the first 10 days, I didn’t take the phone out once or whatever and ask could we have this player? I couldn’t have cared less at that moment.

“For all of us, it was the same. We were all drained. Just finished. Done. In some moments, it was the hardest time of our lives — at least our football lives.”

I think at some points last season we all felt the same. We were privileged of course, but in our context it wasn’t what we signed up for. Not our leisure activity. Nothing leisurely about it.

In that same interview, Jurgen was asked if he loves football more than ever before and he replied “yes” instantly. I suppose once you’ve felt that sense of loss, having it back makes the passion even stronger. We don’t take it for granted anymore, and neither should our manager.

It’s important we don’t take what is happening at the club right now for granted. The best squad we’ve had in years, a trophy wrapped up within the first two months of the new year, fans back in stadiums and The Reds challenging on all four fronts. These really are the days, my friend.

The love affair has been reignited, and it could just be enough to secure a longer stay for our spiritual leader. We can only hope.

Before that though, there are more challenges for him and us to overcome together. It starts with West Ham at Anfield on Saturday late afternoon, and the manager has some selection considerations to make — the grind don’t stop, eh Jurgen?

He’ll no doubt go for Alisson Becker again in goal, as Caoimhin Kelleher continues to come down from the highs of his Wembley heroics. Trent Alexander-Arnold and Andy Robertson will likely flank Virgil van Dijk and Ibrahima Konate, given the injury to Joel Matip.

In midfield, concerns around the availability of Thiago Alcantara, Curtis Jones and Naby Keita, will all but force the manager to go with Fabinho, Jordan Henderson and Harvey Elliott — save for an unlikely leap up the pecking order by either Alex Oxlade-Chamberlain or James Milner.

Upfront, again the manager’s options are limited somewhat by fitness concerns for Roberto Firmino, though he will have a decision to make between Diogo Jota and Luis Diaz. I think he’ll go with the lad from Portugal to get the league’s top three scorers on the pitch from the start, and save our Colombian for another lively cameo off the bench.

We can’t take these days or times for granted. Jurgen and his players won’t be and they know West Ham is one of the bigger challenges they’ll face this season.

Keep getting through them, Reds. Put them all to the sword until we have all the silver and gold we could hope for.

“Liverpool’s squad gives legs and options from the bench. Liverpool will also want to put right the result and performance in the first game against West Ham.”