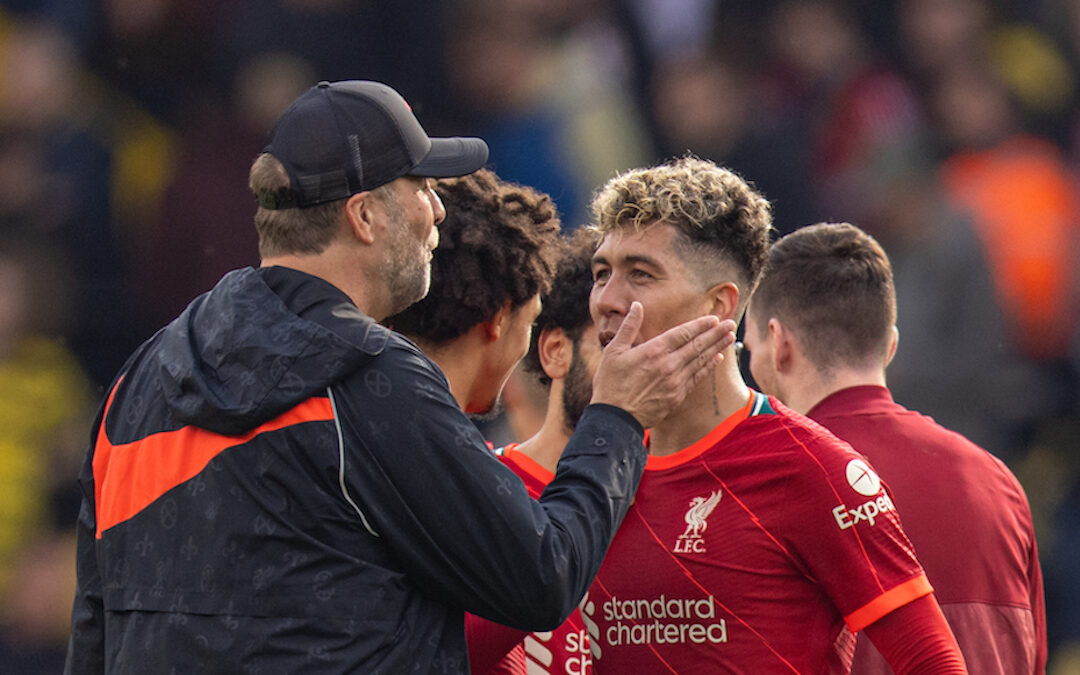 Match preview ahead of Liverpool v Watford in the Premier League at Anfield, the calm before the storm that is to come in April…

THE calm before the storm.

I’ve personally used the international break to take stock. A week off work afforded me enough time to run some errands before a big few weeks of events in my personal life, but also to take a big deep breath.

While the past few weeks have been the best time following Liverpool, once the whirlwind slows down and the dust settles, you definitely feel the intensity of what has just gone. One trophy already in the bag, the gap in the title race down to a single point, and three trophies still up for grabs.

And so the storm is coming. We can see it over the horizon. We want it, if we’re being honest with ourselves. Two weeks without The Reds has well and truly dried out our crops, and a bit of rain and a red sky at night over the green pastures is all we want to see before we can reap what we’ve sown at the end of May. Bring it on.

With all being calm at this moment, the manager will have had some time to think about which 11 players he can start safe in the knowledge that they’ll sweep Watford aside before the bigger challenges come. That’s no disrespect to Watford by the way, and I fully expect the manager to show them all of the respect.

Within his back five he’ll be sure to show that by starting Alisson Becker, Virgil van Dijk and Andy Robertson — and that could be them until June, being honest. Trent Alexander-Arnold’s injury uncertainty means Joe Gomez may well be asked to go again, and Ibrahima Konate can expect a second start in a row after his performance against Nottingham Forest.

In midfield, I don’t expect the manager to start both Fabinho and Jordan Henderson. Fabinho completed a full 90 minutes most recently, so it likely will be him that makes way. I suspect he’ll go with Naby Keita and Thiago Alcantara beyond that, and we can expect a lot of interchanging between the two of them for the third midfield slot in the weeks to come.

Upfront could be the most interesting area of the pitch for this game. Every Liverpool forward that went away on international duty played big minutes and had lots to play for, but Klopp may feel that Mo Salah and Luis Diaz will relish the chance to move on from their individual disappointments. Roberto Firmino is surely the central figure in that frontline.

The calm before the storm. Run your errands and take big deep breaths. Feel the intensity. Have it no other way. Welcome the storm and look forward to reaping what we’ve sown in May.