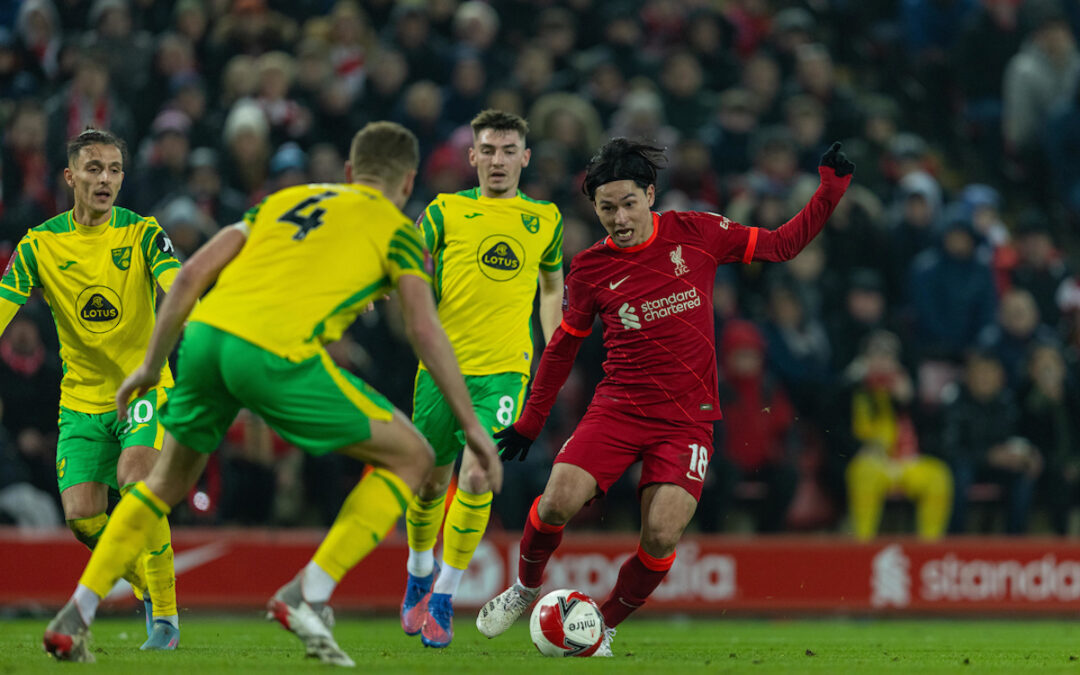 Why have they snuck in this season and what’s the benefit? Hundreds of kids at their first game asleep by half time and Norwich fans wondering if they are going to make it home Thursday or Friday. What a nonsense. Extra time would have gone on until midnight.

Anyway. We won. Quadruple is still on. Up The Reds. Here’s some scores.

Made a great save at the end to remind everyone he’s still the best keeper in the league, despite his mate’s heroics at the weekend. Not a nerve between them. Pair of Fonzys.

Finishes finals and starts FA Cup games that kick off at midnight in the freezing cold. Approaches each one the same. Would tackle his nan and she’s 160.

Bit quiet tonight. Probably knackered from riding an imaginary horse down Wembley Way on Sunday Night. Overlaps great, though. You feel a goal is coming for him. When he does he might ride Divock to the moon.

It’s still not quite happening for big Joe, but it’s another 90 minutes in his legs and hopefully he’ll get back to his best if we all pray to the god of centre halves. And Virgil likes him so he’ll try his best.

Just here to head balls and win cups and he’s almost out of balls. Or heads.

Did well and it’s the second game in a row we’ve looked worse in midfield after he went off. Even simple football minds like mine can see that suggests something. Glad he appears to be over that period where he forgot what he did.

Thought he was the standout player in the first half apart from the lad who kept kicking it in the goal. That reverse pass to Jota was so well disguised it might as well have had a moustache and glasses on.

Tidy but wasn’t in the game loads and I’m worried he might be out for a month, mates. On a lighter note I did think he’d scored second half.

Fella behind me kept calling him Diago. Not Diogo. Not even Diego. Diago. It was like he’d heard his name wasn’t Diego when we signed him and thought “say no more lads, I’ve got this”. Sang his song dead loud and everything. “OHHH HIS NAME IS DIAAAGGGOOO”.

A decent first half and a lovely assist for Taki, but drifted out of it second half. I got very very cross with him when he should have laid Kostas in at the end, but cut inside and tripped over the ball instead.

Bright as a button when he came on. Has a great awareness of space. Like a sound Elon Musk.

Not convinced he’s a six at all really. Needs to get bigger or much better. I don’t want to seem harsh because I think he’s a tidy player who has done great, but he wasn’t really giving us any of what we needed in that position. Think his future is up one. Or Mo Salah gets him benching cars.

Really wanted to score, didn’t he? Electrifies everyone.

Was nice to see him. Him and Diaz coming on last 10 reminded me of when we played TNS at Anfield and brought Steven Gerrard on and their manager moaned about it afterwards like it was a school match and not a fucking Champions League qualifier.

Saying that, I reckon the TNS players were more pleased to play against Gerrard than Norwich’s defenders were to see Mane and Diaz when they were going down with cramp. But that’s us now, lads. Boss lads fucking everywhere. We even leave some at home.