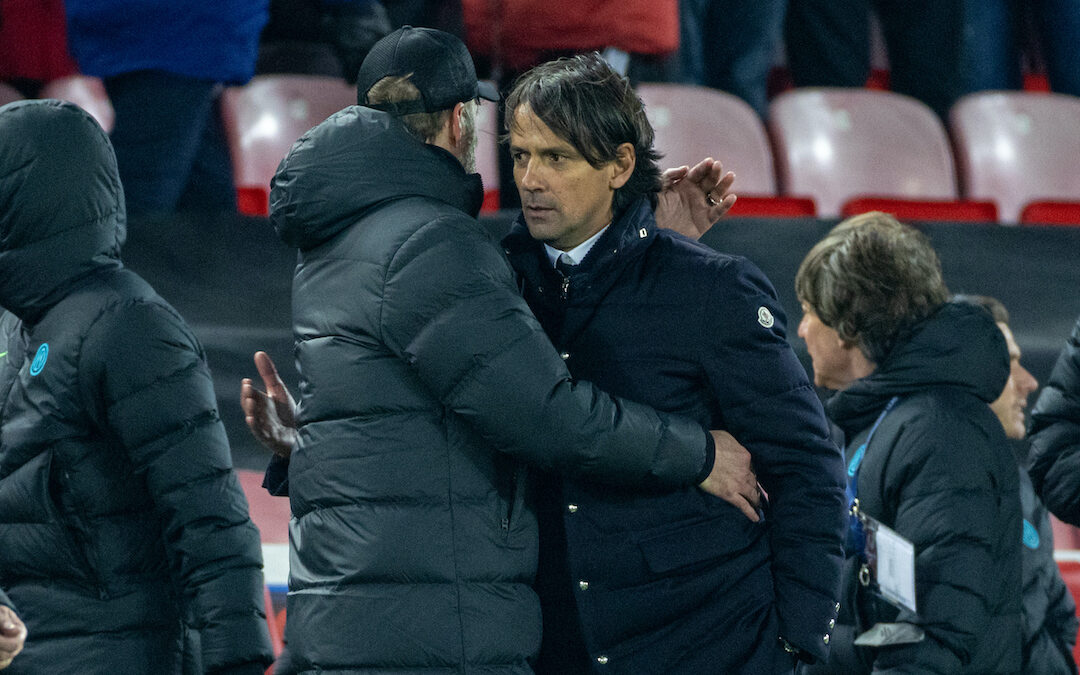 THAT was one of the most memorable performances from a referee I’ve ever seen.

That, obviously, isn’t a good thing.

It matters, this. Liverpool have gone through and the biggest decision in the game — to send Alexis Sanchez off — has gone our way.

But my word. He was everywhere. You couldn’t keep him out of the action. He seemed to redefine the rules as he went. This wasn’t good for either side. He was determined to have murder with their bench. He was one man eager for there to be a punch thrown. By him? At him? From someone else? Simply didn’t care.

He didn’t so much manage the game as wrap it up and lash it in a woodchipper. His commitment to aggro was relentless and insatiable. It got to the point the players were managing him.

You can have all the above.

And then you can still get through. In this instance.

Liverpool are actually rather odd. Diogo Jota and Thiago Alcantara seemed distinctly lacking in sharpness and, because of Inter Milan’s graft and organisation, it suddenly didn’t seem like a game to have those lads involved in.

But we’re not the manager. It’s strange to say off the back of a home defeat, but today is another good day at the office for him and his team. Both Jota and Alcantara will come on for the game and Liverpool progress.

Liverpool progress. Curtis Jones does too. He works some aspects of the game out as he goes, but still has to feel his way at times. He isn’t the finished product but as I stand on the train outside Bootle I ask you this — which of us truly is?

All of these footballers still get to learn and approve and post match it is fascinating to hear Mo Salah speak of the video; envisage the reflection on the game — get stuck into the learning. These Liverpool players love to learn. They love to grow and reflect.

It’s part of why they keep their constant appeal. Liverpool want to get better, want to be better. And tonight’s video will be of use for all of the players. Simultaneously none play badly either. Inter Milan are a very good side who put absolutely everything on the line. They are a very good side whom their supporters seemed so proud of. They are a side who should retain the Italian Championship.

I adore Alessandro Bastoni. He could well be a system player — a footballer who needs to be the creative fulcrum of a back three from the left — but my word he is immensely good at it. He is sumptuous. Someone who isn’t me should write something about footballers like Marcelo Brozovic and how they can and can’t work in certain sides, but he is admirable. They are a side who should leave Anfield pleased with the win.

And that they sort of did. They celebrated the block from Luis Diaz as though it was a goal, despite it being deep in injury time. They went to their excellent end and indulged them. They hugged and congratulated the Liverpool players warmly. This is the story of an acknowledgement — that Liverpool are their own thing. That just keeping them at bay on a night like this is an achievement.

That is another x-factor, albeit one in our favour. Sometimes people just want to give you a game.

Liverpool were given a game. Liverpool had their lead. Liverpool will hit the last eight and Liverpool should fear no one. But Liverpool need to watch the tapes and keep up their commitment to learning and growing.

Who doesn’t these days?

“Liverpool have got through! The sending off came at good time. It’s not often you see Liverpool content at 0-0 or 0-1 but they scored a a work for and created little else.”