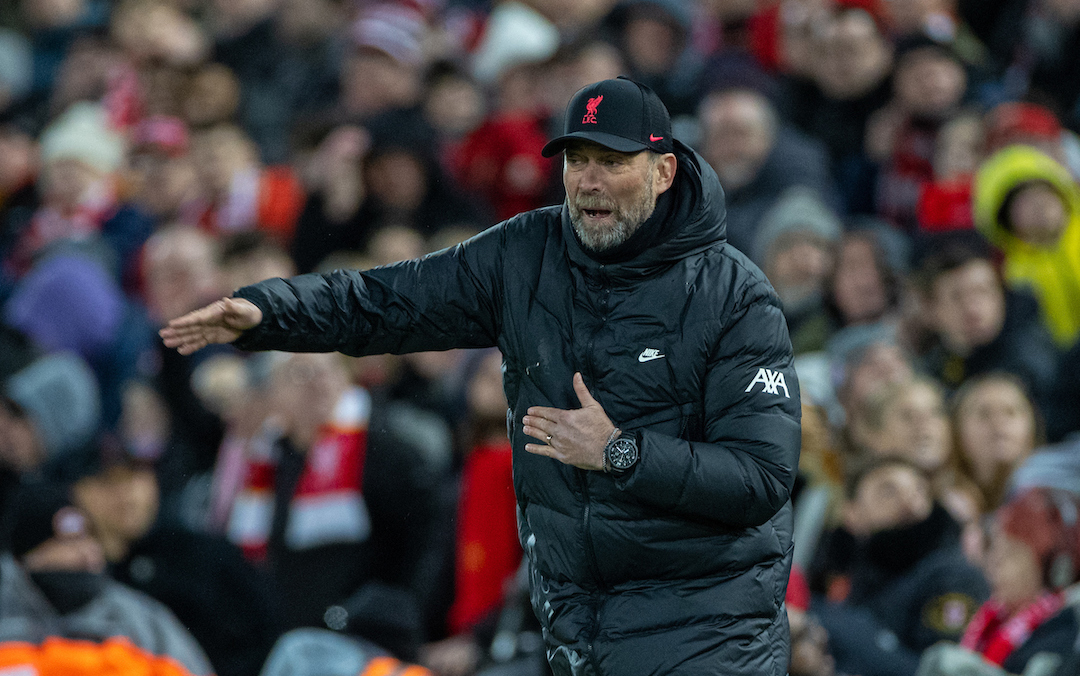 Football doesn’t behave some days. Liverpool today should take the lead early and then should go ahead. Eventually they do take the lead, but then West Ham United spur themselves into action and should equalise. All the while they should equalise, Liverpool should be making it two. The game slithers and slides and flicks its tail menacingly like a rattlesnake in the desert but the sting never quite comes.

But thank Liverpool’s individual defending in moments too. Trent Alexander-Arnold has what could be his best game defensively for Liverpool. Ibrahima Konate’s battle with Michail Antonio is one that will live long in both player’s memories. Andy Robertson is a wonder of a full back. And Virgil van Dijk is the best one in his position. Yet the West Ham United chances kept coming.

We know Jurgen Klopp loves these games. One-nils. Burnley. West Ham. All the clarets. Rich in tension and importance. For all of us who watched us lose at West Ham and perhaps felt a sinking feeling of the title slipping away, this game was as much about the tidal force of Liverpool’s season as it was any individual player.

Liverpool’s will to win at all and any costs was irresistible. It was, perhaps, missing back at the start of November in quite the same way. Liverpool were a serious proposition then, but not a deadly serious one. Not one with its mind on the trophies and the trophies on its mind. Liverpool were exposed by a good West Ham United in both November and March, but it felt that the March version was always going to somehow be OK.

And the March version is attacking beautifully. It really is.

At times Liverpool are dancing through it. Diaz receives the ball and spins round to goal, full of pace and passion. Sadio Mane too. They look nimble and full of beans. More beans than they know what to do with at times

But West Ham also have pace and consistently catch Liverpool, using our possession against us, driving our team back into our own half, forcing hearts into mouths. It was a game that suited them but I’ll say it again — they are a good side stacked with good players. Good players always help.

But Klopp loves these games because you win at the margins. You cannot change the fundamentals. The players are the players and for every stroke of genius in Trent’s crossing, there is a West Ham block pushing Liverpool back. But you can try to be 10 per cent faster, get to the player, earn that extra bit of possession and win these games right in the margins. It is in the margins and in the moments that Liverpool edge it.

This game is a 50-50. West Ham could have won it. But Liverpool win it because we are prepared to always push that bit harder.

Mo Salah looks furious when he is taken off. That is the fury of a man who wants to forever be 10 per cent better than the people trying to catch him. Today he was a constant threat, but it was possibly his poorest game in front of goal since Leicester away or perhaps ever.

But Leicester away is another echo; that day, against a poorer side, a misfiring Salah became a misfiring Liverpool. Leicester created fewer good chances but got an ill-gotten reward. Today West Ham were worthy of at least a point but Liverpool stayed worthy of all three, Salah in his pomp or not.

Klopp loves these games. He knows they are the bedrock a title challenge is built from. You need one or two of these and when the final whistle goes, every player is worthy of acclaim. Naby Keita was marvellous again. Playing his part in a season which is spiralling towards silver.

Just one of those 1-0s. You know the score. There’s a league to be won here, you know.

“It was a tense game. It could have been any score at half time. I thought, individually, Liverpool defended brilliantly. Keita’s tackle at the end was unreal.”