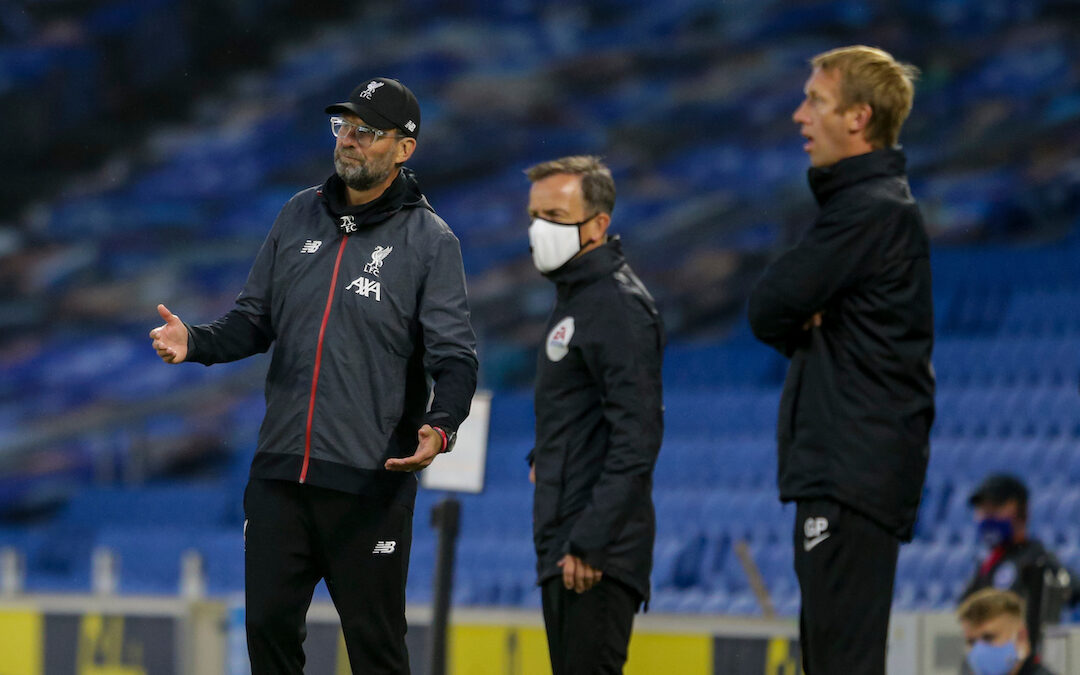 INTERNAZIONALE were brought on and promptly knocked out by The Reds.

Well, by promptly I definitely don’t mean with ease. An absolute wonder goal from Lautaro Martinez whispered doubts into the minds of Liverpudlians for an uncomfortable 20 minutes. But hey ho, off to the quarters we go, even after our third defeat this season.

The Reds will be looking to make lighter work of Brighton with the teams sat on opposite ends of the form table. Yet saying that, The Seagulls are unbeaten in three games against Liverpool, winning one and drawing two of those previous meetings.

Brighton welcome Liverpool to the seaside on the back of four consecutive defeats in the league, which will equal their record of five games from 2007 if beaten. The Reds, on the other hand, come into this game in flying form — looking for their eighth successive league win in their title charge, with just four goals conceded in 2022.

In today’s press conference, Jurgen Klopp spoke of potential Covid issues in the squad, after the likes of Virgil Van Dijk, Thiago Alcantara and Ibrahima Konate were notable absentees from the club’s training photos released yesterday.

“We had a few little things but nobody is out of training. On top of that, Covid is not over, so these things, we’ve had. We try everything to avoid, but it’s not always possible. Players and staff have no symptoms but cannot be involved.”

With that being said, what sort of shape will his side be in for this trip down south? Alisson Becker, Trent Alexander-Arnold, Joel Matip and Andy Robertson are likely to be kept in, but the manager may use this as an opportunity to draft Joe Gomez in — especially as he’s more used to the left-sided centre-half role than Matip or Ibrahima Konate.

Assuming Thiago will miss out, Klopp will likely go for the midfield that finished Tuesday’s second leg against Inter, with Jordan Henderson and Naby Keita flanking Fabinho. That would allow the manager to build towards a possible Henderson, Fabinho and Thiago midfield against Arsenal in midweek, so long as the Spaniard is back by then.

With the news that Roberto Firmino is back in full training, there are a plethora of options once again in attack. Firmino will likely start from the bench, alongside one of Sadio Mane or Diogo Jota, with Luis Diaz returning to the starting lineup. If he chooses based on the displays in midweek, he should be more enthused by Mane’s showing through the middle.

Graham Potter sung The Reds’ praises today, saying: “Even Jurgen would say they aren’t unbeatable. I think what it is fair to say is that they are one of the best teams in the world. They have played at an incredible level for a consistent amount of time now. Full respect for them, for Jurgen, for his staff and players because of what they have achieved.”

While it’s nice to hear Liverpool getting respect from their peers, it won’t bring the three points on Saturday. The Reds know they face a big challenge as they continue to chase down Manchester City, and that has to be the main focus for now.

“There’s not been a team in the history of football that’s been all singing all dancing every week, sometimes you have got to dig in… this game will tell you a lot where LFC are at.”