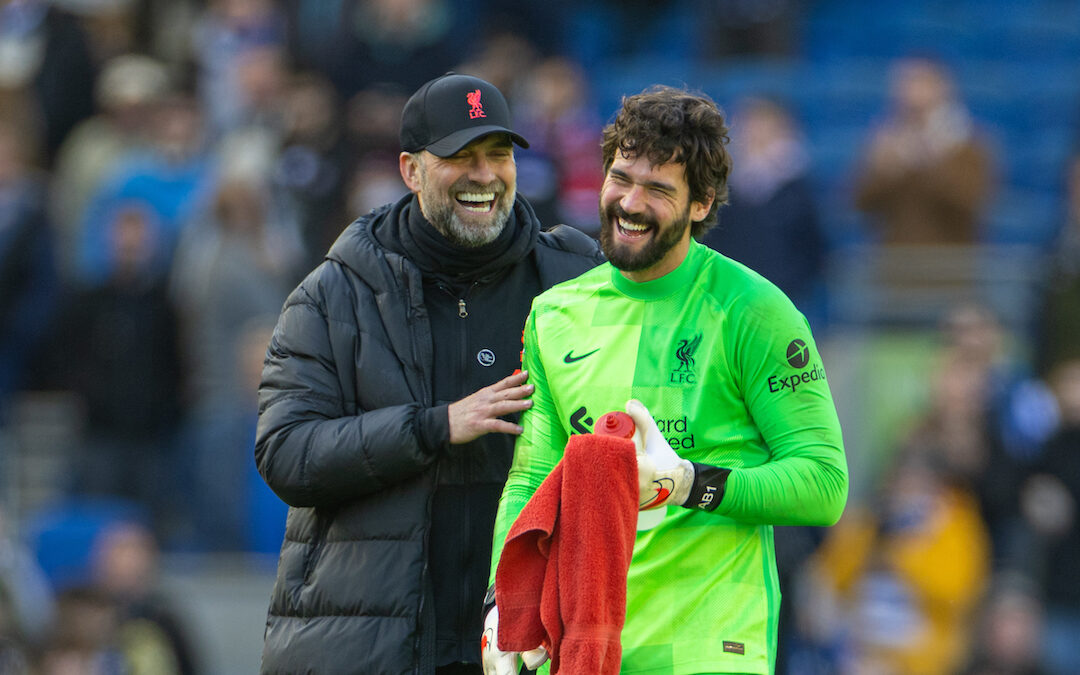 THERE are moments when you realise Liverpool aren’t messing about.

Regardless right now, Liverpool have clicked into the mode which they found themselves in during the 2018-19 season and they didn’t click out of it until they had won the two biggest prizes they could win. The greatest trophy in football and the 30-year quest.

At Wolverhampton in December 2018 as the rain drove down, it was clear this was a team capable of winning forever if it was required. Today the same applies. It wasn’t raining, it was instead spring sunshine. Brighton probably aren’t quite in the class that Wolves side were then. But they are a side who have stopped Liverpool in their last three games against them. They are a side good at a lot of football, a clever side, a side who could find a way.

And all of that is just swept aside. Brighton start well and ask questions of Liverpool for 10 minutes. Then Liverpool grow and take control and then they score and nobody knows what to do.

It was odd. We couldn’t take it in from 100 yards away. Luis Diaz was flattened, it looked a red card, looked a penalty but the ball was in the net and our signing was down and in some discomfort. There has probably never been an opening goal celebrated less by a Liverpool away end.

It had been earned. The sweeping aside was in earnest and is best epitomised by Virgil van Dijk. To watch Virgil is to watch greatness. It’s to watch certainty. It is also to watch needle. He glories in what he is and what it means for the opposition. He is the best player any of them will ever face and he reminds them of it over and over again. Uses flick headers, his pace, his reading of the game to make clear he is utterly in charge. He defines Liverpool not messing about.

In Diaz, Virgil knows he has an outball. So does Jordan Henderson. Henderson used Diaz to help guide the side home but he was occasionally a little slack in his passing. He was on his own back while doing what needed to be done.

Naby Keita wasn’t slack. It was an excellent display again. Keita controlled the game. He is becoming a footballer it is a pleasure to watch and what I mean by that is he is a pleasure to keep an eye on in the ground. Every little thing is in order. He’s a fast bowler in the groove of line and length and where all wickets will come. He’s exactly what Liverpool and Jurgen Klopp need.

Sadio Mane yet again looked splendid at number nine. It’s striking that Liverpool could well be in the process of yet again tweaking what you expect from a position. Mane is able to hold the ball up and show his range of passing in the position. He’s learning as he is going but he is also making it his own.

Being honest, we were poorer after the Mo Salah sub because it led to Mane being moved. He can make that position through the middle his own for the rest of his time at Liverpool. He was the best player on the pitch.

Salah helps. He makes football matches happen where he wants them to. He makes himself need to be constantly monitored. He is never out of the game. Liverpool are built for him.

There is so much to admire at the moment with this side. Thiago Alcantara comes on and wins some balls as they bobble. Both full backs are willing. The keeper grabs some attention.

Brighton were left just being second best. You’d expect that, don’t get me wrong, but the manner of it was so clear it was both belied and emphasised by the scoreline.

There is some magic about a 0-2, especially for a side who are bouncing game to game. It’s a signal in the sky. This is who we are now, what we are. They’ll see that signal crystal clear above Manchester. I couldn’t be happier that it is there.

Wednesday next. We will need to win. But we aren’t messing about. We mean business.

This league isn’t going to win itself, you know.

“I love Mané through the middle. We’ve seen him come on so much in that position in only three or four games.” 🇸🇳