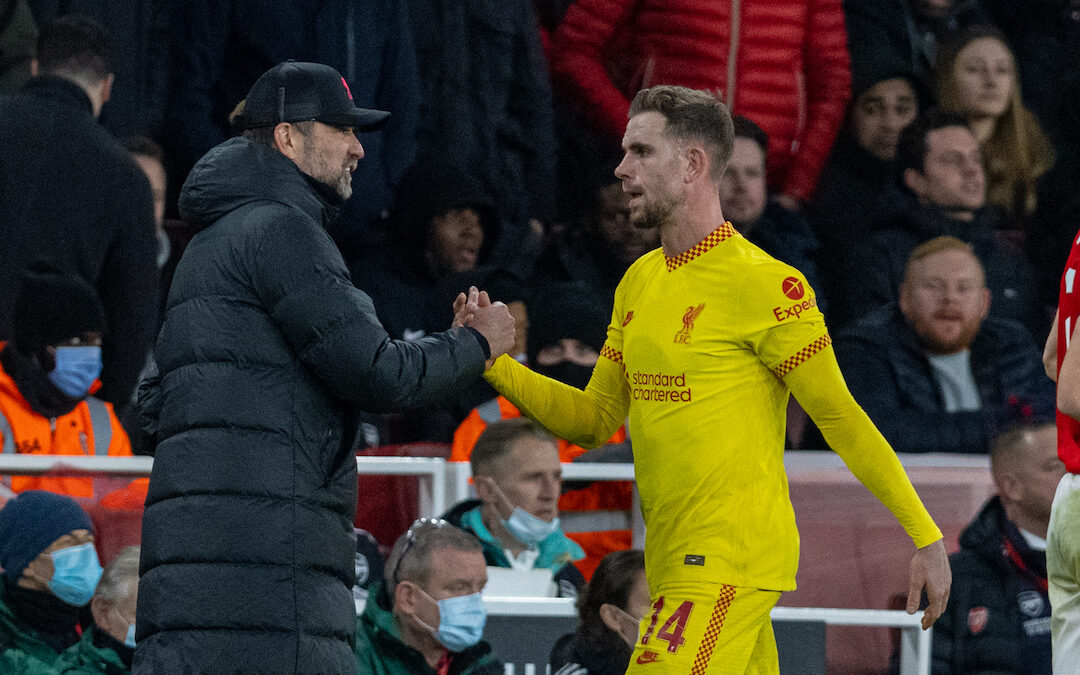 Match preview ahead of Arsenal v Liverpool in the Premier League at the Emirates Stadium, with The Reds desperate to capitalise…

WHY do we do it to ourselves?

I asked myself that repeatedly last night as the clock ever so slowly ticked into injury time at Selhurst Park. Jurgen Klopp said he managed to watch 65 minutes — for analytical reasons, of course. I sat through the full 90 with one eye closed.

And then what we thought was inevitable didn’t come, and we all remembered exactly why we do it to ourselves. It was another timely reminder that we really can win this league.

Yesterday’s result is now a thing of the past as we go in pursuit of the title, and it’s time to focus on what we can control: the penultimate game of 11 in four weeks is upon us.

With a congested schedule, we’ve seen Liverpool figuring out game by game whether or not they need to go through the gears. After taking the lead against Brighton at the weekend, Liverpool entered cruise control and coasted to three points. Against Inter Milan, they never really got out of third gear, but it was a rare game they could afford to lose. Contrastingly, there were no opportunities to slow down against West Ham.

Preparing to face a strong Arsenal side tomorrow night, the boys will be well aware that fifth and maybe even sixth gear will be required to come away with a vital three points. Mikel Arteta has recorded five straight wins for the first time in his managerial career, and there’s a sense his strategy focused on building around young talent is starting to pay off.

“Mikel is doing an incredible job there. You can really see week by week and month by month the development and that’s really impressive. We have to be ready, but I sense we will be ready,” Klopp said in his pre-match press conference.

With that in mind, and a break on the horizon after an FA Cup fixture, there’s no doubt we’ll see the strongest possible starting 11 lineup at the Emirates.

With eight Premier League wins in a row and only two conceded during that time, Klopp highlighted the defence as “the basis for everything”. Following yet another solid performance at the weekend, and with Ibrahima Konate just back fit, we’ll likely see Joel Matip again alongside Virgil van Dijk and Alisson Becker in goal. Matip proved his attacking capabilities once again against Brighton — add Trent Alexander-Arnold and Andy Robertson into the mix and it doesn’t get much better.

Naby Keita has shown his ability to control the middle of the park in recent games, and is clearly discovering his rhythm. I expect Thiago Alcantara to come back in for this one, though, as his creativity and precision passing will help to break down a solid Arsenal’s defence. Fabinho and Jordan Henderson will likely complete the trusted trio.

After scoring more than 20 goals in four consecutive seasons, the news that Mo Salah is fit is a huge boost. It would be a bold move to leave the player Klopp called a “tough cookie” on the bench. There’s no denying Diogo Jota loves to score against Arsenal, averaging a goal every 61 minutes he’s played against them, but with Luis Diaz’ man-of-the-match performance and Sadio Mane playing exceptionally through the middle, the upfront decision will be the most challenging for Klopp.

I’d err on the side of momentum, and stick with Salah, Mane and Diaz. Not bad to bring the league’s second top scorer on around the 60 mark, hey?

The last time we won at the Emirates we went on to secure our first piece of silverware of the season. Let’s hope history repeats itself as we remain in pursuit of the second, third and fourth trophies.

It’s all to play for.