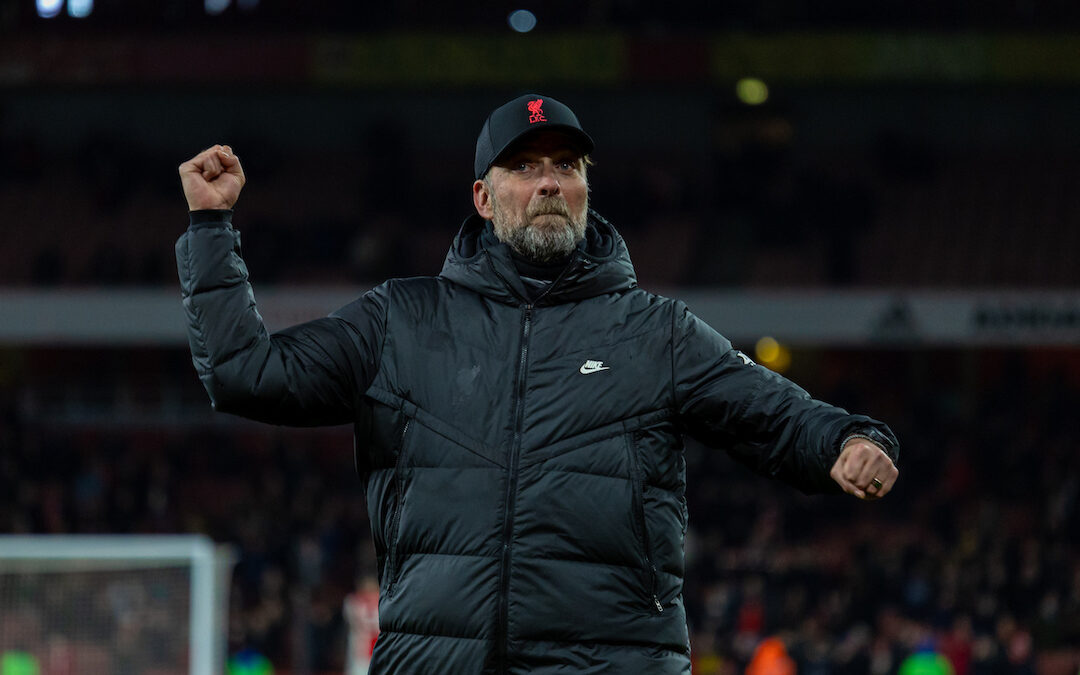 There was a point where it felt they’d thrown too many cheap points away. But you thought they could click into business.

There was the idea it could become a procession. But you suspected they’d never stand for that.

Today I was in row four. Row four through the wind, through the rain. Drenched with heavy drops from the Emirates roof. Soaked by the gale blowing the rain in.

In front of me, right in front I saw Andy Robertson take one step at a time. Saw him win it back with aggression and precision. Saw him stride. Saw him take a breath and a look. Saw him pick out Roberto Firmino. Through the wind and the rain, saw him take his steps with certainty and desire and saw Liverpool win the game because of those steps.

Make no mistake, Roberto Firmino still had work to do. The flick was one thing, the celebration another. It was reminiscent of Kenny in London in ’78. The goal and the celebration all as one sweet, sweet move. The graft from elsewhere, the delight for us all.

For the full 90, Robertson was impeccable. Nobody has ever wanted to win the football league more. His anticipation in all phases of the game is a credit to him and his manager. He is the brightest of footballers. He understands both game and contest. He wins his battles in all the ways they can be won. He is man of the match and man of the hour.

Diogo Jota opens the scoring crowning the moment that Thiago Alcantara owns the game. It belonged to him second half and that included his sloppiness in one moment and his excellence in all the others. Jota’s simplicity in finishing makes it all the more incredible that he keeps doing it. He strikes it hard and low and surprises Ramsdale. The ball leaves his foot and finds the net in an instant.

The whole game is firstly a vindication of cutting edge. Liverpool have it and, when it is the blood and the bone in the pouring rain, Arsenal just don’t quite.

But secondly it is a confirmation of the brilliance of Liverpool’s centre backs. Second half I was immensely impressed with Ben White. He played very well indeed. He was the third best centre back on the pitch.

One of the reasons why this league is so alive is that Arsenal are the fourth best team in the country and, man for man, they aren’t as good as Liverpool. And they are good.

The hard part hasn’t even started yet. Crampon by crampon Liverpool have clambered up the mountain. They’ve got to the hard part. The league isn’t going to win itself. It will take some winning. But I like the look of our lads. I like the glint in their eye.

Whatever happens, they’ll do for me. They, their manager, they exist in a state of grace. Grace with gritted teeth, grace with a glint in their eye, but grace nevertheless.

I shall not be moved.

You can’t get a better tell than that! Are we gonna win the league? Well that’s one hell of a sign that they are! That’s a massive game and the Reds have just ticked it off!