Liverpool: The Magic Of Momentum Can Make Manchester Miserable 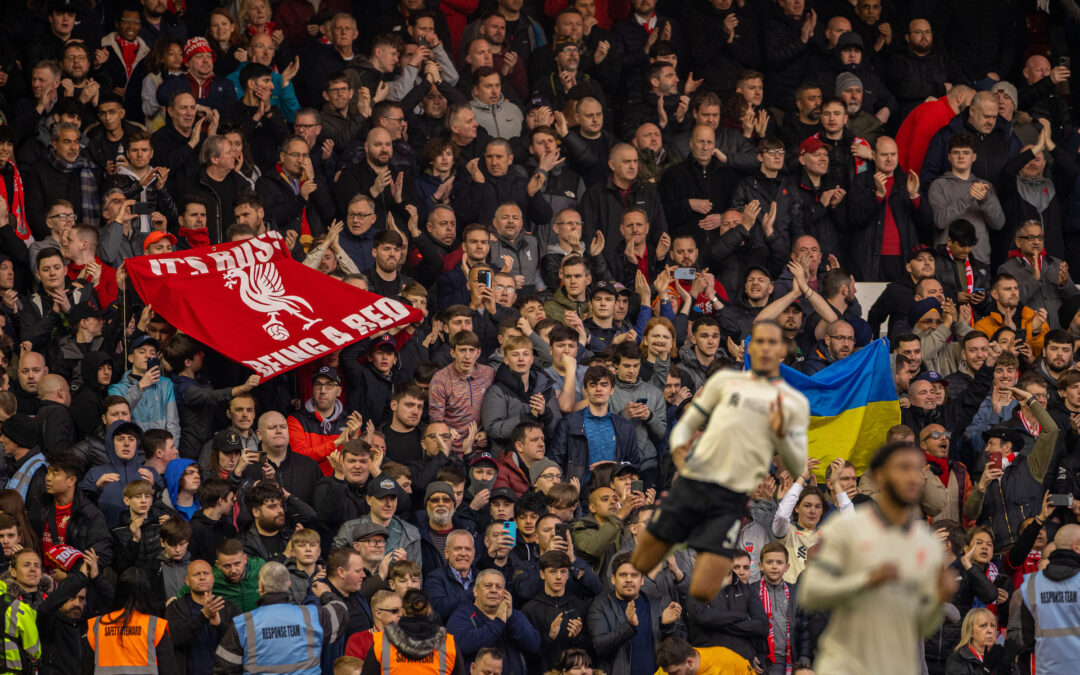 It’s 47 games played and counting for The Reds, but once again it’s Manchester City standing in the way of something special

ONE trophy in the cabinet, in the semi-final of the FA Cup, the last eight in Europe and one point behind the Premier League leaders with a mano-a-mano scrap to come. These are the days, my friend.

There are shades of 2001 in all this. There were times back then when I’d wake up and wonder what competition we were in next. You could only get printed tickets then, so you never knew which billets were in the next envelope. It was fantastic then and it’s fantastic now.

The victory over Nottingham Forest wasn’t pretty, but it was another hurdle negotiated against tricky opposition. The atmosphere was incredible on the banks of the Trent, which apparently overlooks the Mull of Kintyre (don’t ask me). They’ve got a decent setup there. They’ll do well if they can keep them altogether.

It was just a shame the police thought that it would be a clever idea to let us out of the ground at the same time as them when we clearly can’t stand each other. Great thinking, lads.

Diogo Jota’s goal aside, my highlight came before the game. Forest have clearly borrowed their sound system from Wembley, where the decibel level only has two settings – deafening and ear-splitting.

Just before kick-off they played a rave banger from yesteryear to gee up the crowd and our lot were fully onboard. While their lot were singing about ‘We’re coming for you’ and the usual poverty stuff, our end bounced along to the tune with wide grins, completely oblivious to the taunts from left, right and above. A good time came first and the cartoon abuse could wait.

But that’s done now and we get a bit of time off (winks at Trent) thanks to the international break. We’ll need it, too. The last few weeks have been exhausting with must-win games following must-win games.

It’s funny how easy it is to see any fixture as a potential calamity. We’ve got Watford coming up next at Anfield and though we’ve already hammered them on their own ground and now they’ve added Roy Hodgson to boot, it’s somehow easy to group them in the same bracket of Xavi and Iniesta’s Barcelona.

Nerves creep in regardless of who we’re playing. I suppose we get to the stage where we think this run has to end sometime. The “Footballing Gods” and all that.

And yet in this past couple of weeks alone we’ve overcome Arsenal on their own midden and got past Inter Milan—two fixtures that would make even the most optimistic Red frown a bit. Oh, we knew we’d be fine, but they’re hardly a cakewalk.

Arsenal away was only last week and since then we’ve just got into the semi-finals of the FA Cup. The pressure never ends and I love it, but I’m also looking forward to a footy-free weekend.

One trophy in the cabinet, in the semi of the other domestic cup, the last eight in Europe and one point behind the League leaders. It’s telling that one club stands between all of them. Yes, I know we have Benfica with Villarreal or Bayern to come, but it’s Manchester City most people are thinking about – and with good reason.

We play so many games in a season – it’s 47 already this campaign – and yet everything funnels down to us and them in the end. We play them twice over the coming weeks and it could be three times. I hope so anyway. If we beat them three times, we could … no, let’s not start that.

Jurgen won’t be thinking about four trophies and I’m fighting every thought of it. I learned much from Gerard Houllier’s “10 games from greatness” from 2002 and the power of the Footballing Gods. Stay humble.

7 – In all competitions, Liverpool have now won each of their last seven away games, their joint-longest ever winning run on the road (also runs of seven ending in Feb 1982 and March 1988). Marching. pic.twitter.com/TmEMsr2spu

But how do you stay humble when this side can fight and fight and fight when things aren’t going their way? The Arsenal game was a perfect example. Mikel Arteta came armed with a plan and it would have worked against a lesser side but this one sat in and took its chances when it could.

History will show only the result but that doggedness, that determination is as much a characteristic as Mo Salah’s goals and the positioning of the full backs.

It’s why many pundits are performing frantic about-turns with their predictions. Yes, we were 14 points behind City just five weeks ago but if there’s one team in the league who can reduce that number it’s the lads in red.

Alex Ferguson went on about “squeaky bum time”, but this is all about momentum. City looked lost at Crystal Palace when it became obvious that they were in a fight with those Gods again while Jurgen’s Reds found a way when our London fixture was heading the same way.

That edge might help but it won’t be the only factor. City are an excellent side and one which can render any fixture meaningless before half-time. Pep Guardiola won’t be nervous, just furious that it’s come down to this.

But this is only a snapshot—a moment in a season. Both teams are in different places than they were last week and that too can change. Not this week though. This week we get to put our feet up and reflect.

I like it like this, having one irritating nemesis. Sure, Chelsea are a strong side and worthy of their place in the top three, but it’s great having a Moriarty to our Holmes, a Master to our Doctor.

I know we can look at some of the decisions they’ve had, and they’ll say the same about us, and no fan believes their side are treated fairly, but I like having them as a focus. Two of the greatest managers in the game staring at each other across the 36 miles between them. Sure, the other sides will take points off us both but they’re the side to beat.

It’s time to buckle in as we get to the business end of the season. It’s us and them again and it might be like that for a while. Use your momentum.

These are the days.