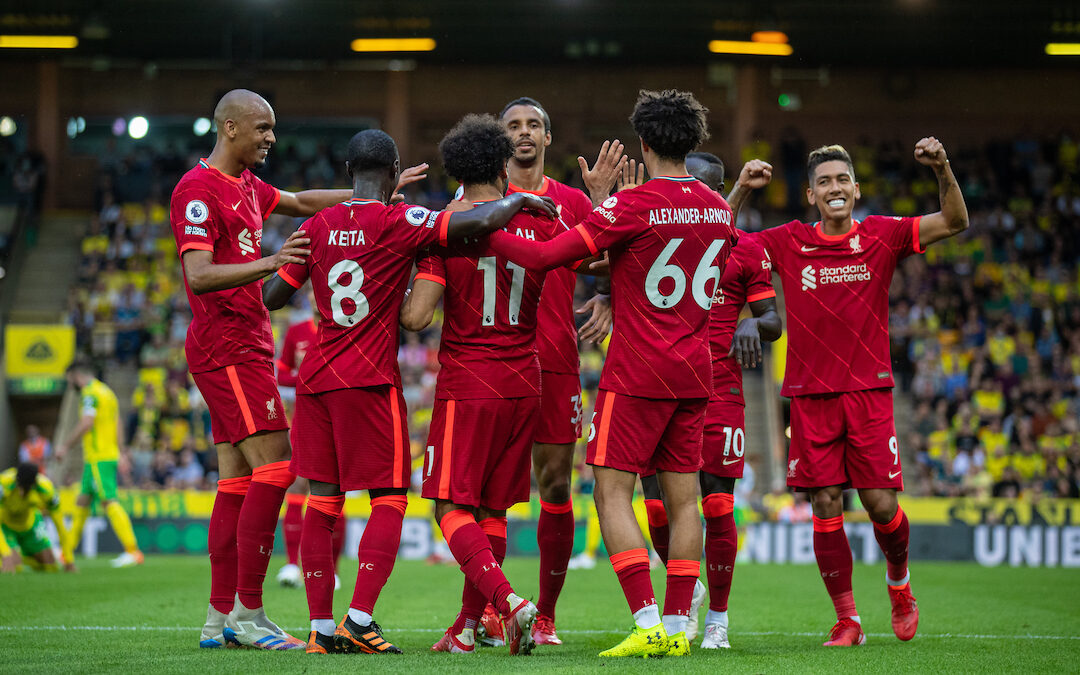 Match preview ahead of Liverpool v Norwich City in the Premier League at Anfield, with The Reds’ threatening to cause a storm…

ONE of the things that the pandemic seems to have given everybody is a real appreciation of the moment.

For so many there is still more than enough to worry about in the future, but for the most part we’ve learned that tackling the day ahead is the most important thing.

That shorter-term thinking has led to several momentary fads developing, with specific days feeling consumed by a certain activity or talking point, before we all go to bed and start on the next thing tomorrow — he says as a man who’s just completed his first game of Wordle.

As I sat down to write this, all I could think about was the storm raging around us. No, I don’t mean the slipstream and wake of defenders left behind a Luis Diaz sprint from the bench, I of course mean Eunice injecting some added chaos into everybody’s day in the UK (for those further afield, I envy you being able to remember a time where you weren’t about to be flung into the air).

If tomorrow I wake up and the wind has finally disappeared, I’m sure I’ll be onto the next thing. That next thing should be The Reds, but in truth they occupy a lot of my thoughts — I mean, it is my actual job after all. They will also occupy a lot of my time for the next few weeks, with six consecutive home games if you include their role as the “home team” at Wembley.

I just can’t take my mind off them, at the moment. They’re starting to click into gear at the perfect time, and they’ve still got gears to go through in terms of performance level. The results, though. Oh, the results.

I was never completely sold on the old adage that winning when not performing well, in and of itself, was the mark of champions. I think it’s another of football’s lazy soundbites that gets mistaken for actual analysis. This Liverpool side, though, have been masters of that art before and they look like they could be getting back to that once again.

Yet we know there is more to come. Games like Norwich City at Anfield should really be opportunities for Jurgen Klopp’s charges to take a little stroll through those gears. To flex their significant muscles and show their opponents the way to go home.

To do that they’ll need their tried and trusted back five to be right on top of their game. Ibrahima Konate was great in the week, Kostas Tsimikas will be wondering where his next start comes from and Joe Gomez will be scratching around for minutes, but it’s the likely lads that will do it for me on Saturday.

In midfield I expect the two substitute heroes of the San Siro, Jordan Henderson and Naby Keita, to be rewarded with the right and left berths either side of the immovable Fabinho. That gives the manager the chance to start Thiago Alcantara and Harvey Elliott against Leeds for the second time this season.

Up top, no Diogo Jota could open up a spot for newboy Luis Diaz to get his second league start, though I’ve managed to talk myself into Klopp favouring going with his tried and trusted trio given that they’ll likely be the three he opts for in just over a week’s time at Wembley.

The roof of the O2 arena may seem like the biggest rip in the immediacy, but I’m expecting these Reds to rip through Norwich this weekend. I want them to occupy all of our thoughts until the very end of May and beyond.

Go through the gears, Liverpool. All these trophies aren’t going to win themselves.

“You would like to see Liverpool scoring some goals and do our goal difference some good…we shouldn’t underplay this opportunity.”