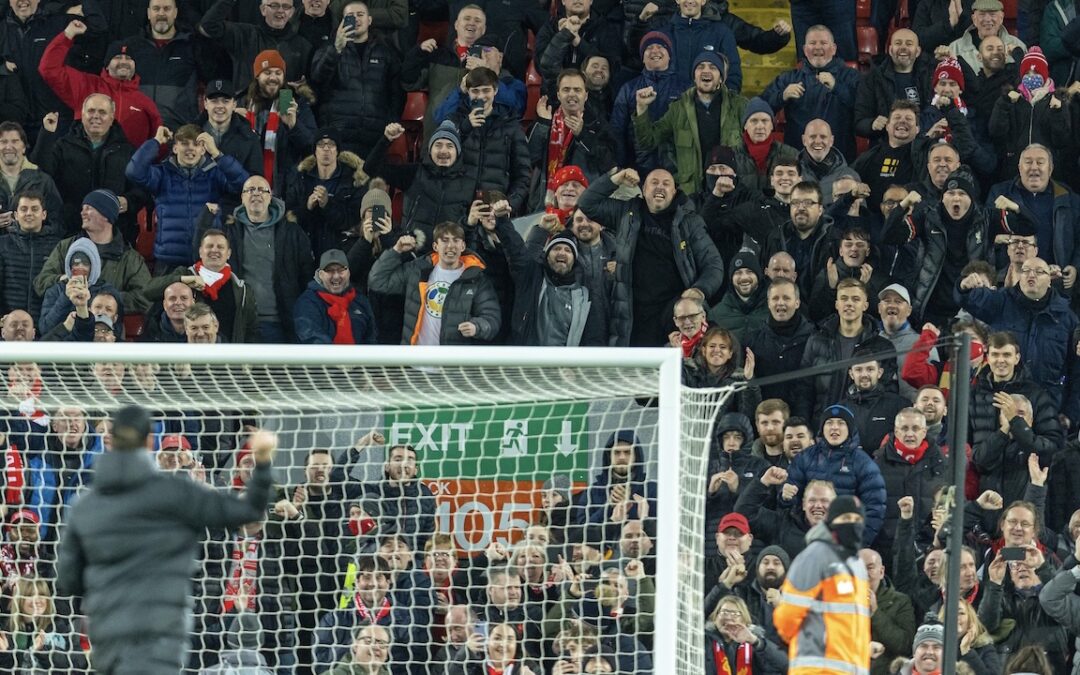 Six and we spent a fair bit of time within ourselves

Six and we could have scored seven, eight, nine.

Leeds United were flattered by six in the end.

Believe it or not, I enjoyed their end. I enjoyed it because they genuinely seemed to believe this approach was their way home. They knew it wouldn’t be tonight but, being fair to them, they believe it in their bigger picture.

Believe it or not, I mean that sincerely. There is something to be said about the approach, the certainty and the aggression of it. They constantly play as though the game will come to them if they force it. The issue on evenings such as this though, is that every Liverpool player is better than every Leeds player — with the possible exceptions of Luke Ayling and Raphinha and the latter looks woefully short of belief.

Ayling is self-evidently a serious footballer, but he couldn’t deal with wave after wave of Liverpool attack alone. The next problem Leeds had is Liverpool were first to everything.

For the first five minutes the Leeds approach comes as a surprise to Curtis Jones. For the remainder of his time on the pitch he dominates all of his one-v-one encounters. You do this, you get this close, you leave yourself open to being exposed. It happens and it keeps happening.

This evening isn’t an exceptional performance from Thiago Alcantara but the game is his. He pushes and pulls as he sees fit. He wriggles and turns and there is always space.

Mo Salah scores a pair of pens and should get his hat trick after Curtis Jones lays it on. He is irresistible time and time again. He is my favourite; all of our favourites. There has been a time through generations where the best player, the very best in the world plies his trade at Liverpool. Steven Gerrard, Fernando Torres, Michael Owen, John Barnes, Kenny Dalglish, Kevin Keegan were all in a conversation to greater or lesser degrees. But it is only really Salah and Dalglish who had such longevity within that conversation at a global level. He is that good. He is the very best.

Sadio Mane ends up with a brace. By the final whistle, Liverpool have the top three scorers and the top three assist makers in the country. The two should theoretically go hand in hand but, firstly, the world rarely works like that and, secondly, assists aren’t a clean stat. What is a clean stat and what is clear to the eye is that Liverpool attack significantly better than any team in the country, currently.

The centre backs split a pair of goals. Joel’s has been coming. He bursts into penalty areas so often now and his finish is sumptuous. Virgil’s is inevitable. There’s a big a hole and there he is. First and certain.

There isn’t currently a trademark Liverpool goal. I mean this as a compliment. All the goals are Liverpool goals. They are capable of any goal at any time. They aren’t to be messed with. Whatever it takes they seem to have.

Sunday? Sunday is different. Sunday is us facing the greatest trophy-amassing squad the world has ever seen. Chelsea are marvellous at finals. They know exactly how to do them. This season, though, they are nowhere against Liverpool in the league. Liverpool only have eyes for first.

Sunday gets to be its own thing. Trophies don’t win themselves. Eventually there is a reckoning. I fancy Liverpool in all the reckonings at the minute, but that is sort of my job frankly. It’s the thing I am meant to be.

But Christ, I’ll write this down here and write it down now: I think we go to the Etihad top. I genuinely do. I don’t think we face a side in this competition that can stop us between now and then. I think we eat the ground up. I think Liverpool are rampant and I think they know we can win this league, you know.

Another win. Another evening where Liverpool are special. Another moment of clarity.

We can win this league, you know. Tell your mates.

“Liverpool have given Leeds six of the best and then Jürgen gave us six fist pumps. Absolutely amazing!”