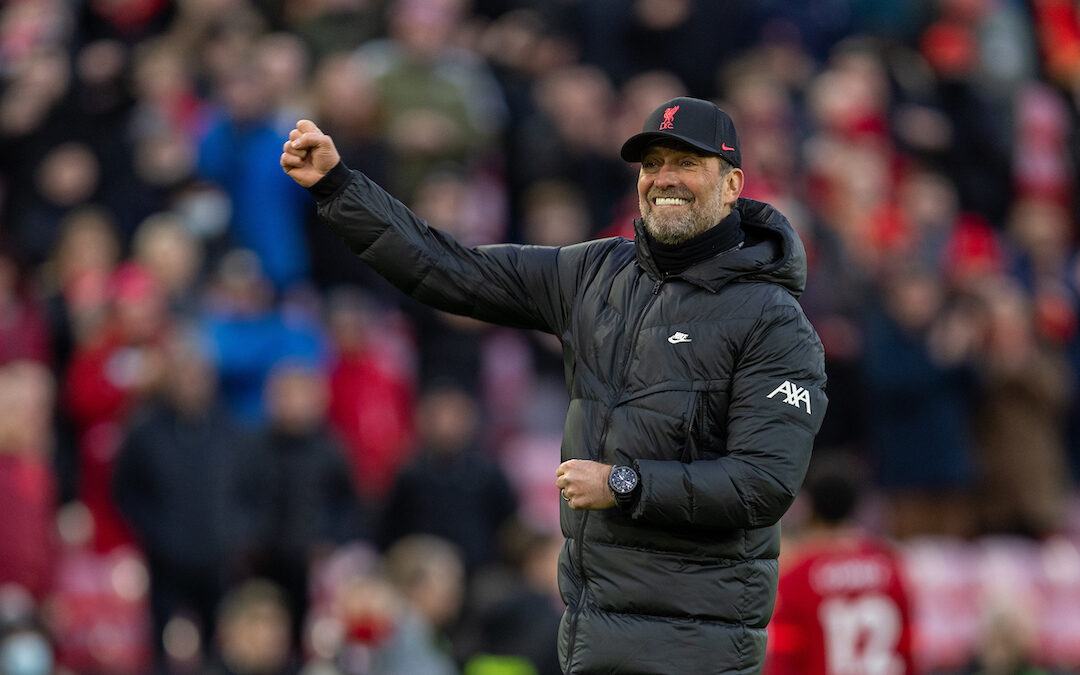 Neil Atkinson’s post-match review after Liverpool 3 Norwich City 1 in the Premier League at Anfield, as the straightforward turns to magic…

LIVERPOOL 3 Norwich City 1. No alarms and no surprises. Looks ordinary.

So many alarms. So many surprises.

Sometimes ordinary days are great days. Sometimes Liverpool play a team like Norwich and, for whatever reason, it isn’t straightforward.

Sometimes ordinary moments in football grounds that happen every week have a context and a reality that makes them really special. When Norwich pull ahead at Anfield, having failed to score in game after game after game, you can imagine their fans feeling a moment of ethereal magic among the regularity of football. Predictable as football is, there are moments that are exceptional.

And this game had them. Magic within the mundane. When Sadio Mane backflipped his way to a goal on the 64th minute to draw Liverpool level. When Mo Salah kicks the ball as slowly as a ball has ever been kicked and it still crosses the goal line as if the defender’s legs are under a spell. Magic. When Luis Diaz found himself on the end of a Jordan Henderson through ball and flicked his finish. Spellbinding.

Magic saved the day. There is a Terry Pratchett concept of gnarly ground. Ground that magic has ruined where people see what they want to see. In a bad mental space the chasms and ravines are wide and deep. Certain and you can bound over them with a stride.

The chasm opened up there. You stared down into the abyss. You saw how wrong things could suddenly be.

And then the abyss winked back. It gave you a cheeky smile and patted you on the head and urged you to have a lovely night.

Your memories never help. First half there was a fair bit of Liverpool being on the verge only to be comically clumsy. It felt their keeper was on the verge of the epic. The first half grinds out frustratingly as Liverpool’s very good 11 make Norwich look very much better than they are. You have seen this film before.

Second half Liverpool start so slowly. Norwich play very well and understand where the space will be. They pace their through balls and lofted passes well. And then they fluke one.

You remember. You’ve been in that ground an awful lot. You remember hard lines and sloppy moments and you find yourself on gnarly ground and look into the abyss.

What changes matters is the substitutions, the change in shape and the collective digging deep.

Thiago Alcantara’s half hour was hewn with footballing charisma. He raised everyone around him. He raised the crowd. He demanded more and got it in spades.

It’s a strange thing to articulate — Liverpool ended up net a midfielder down but had so much more midfield happening. Jordan Henderson shifted from occasionally dismayed spectator to actual participant.

Both full backs toiled defensively all game but Kostas Tsimikas nodded it across the box brilliantly for the equaliser. Today was a salient reminder, though, of the brilliance of the main pair. The wider Joe Gomez concern is how much he looks like someone who hasn’t played very much football, and how that changes as a state of affairs.

Through the whole 90, Mo Salah was electrifying. He was dancing at times and the way he pulls the ball out of the sky for the goal was a sight to behold. On another day he gets a hat trick. That day may be Wednesday.

But it may not be. What we have seen is that Liverpool can always be given a game. Norwich City were a credit to themselves and those expecting them just to go down may be in for a surprise. They offered more at Anfield today than many a side have managed.

Leeds could do the same. But the game could also go the same way because of things Liverpool do. The point of the gnarly ground is that you learn things about yourself.

This is the business end. This is what it is to be in amongst it. Bring on your chasms by the score. Bring on doubt and bring on vanquishing it. Bring on living on your nerves from time to time. You remember, when confronted by the reality of what losing would mean, why winning is so tremendous.

Nothing worth winning wins itself. We hang in there. We live to fight another day. Magic within the mundane. Worth getting out of bed for.

“We got there in the end! We’ve shown the power of our bench again, I thought Thiago was absolutely brilliant. Made up for Diaz, he’s up and running.”

And some Jurgen fist bumps👊