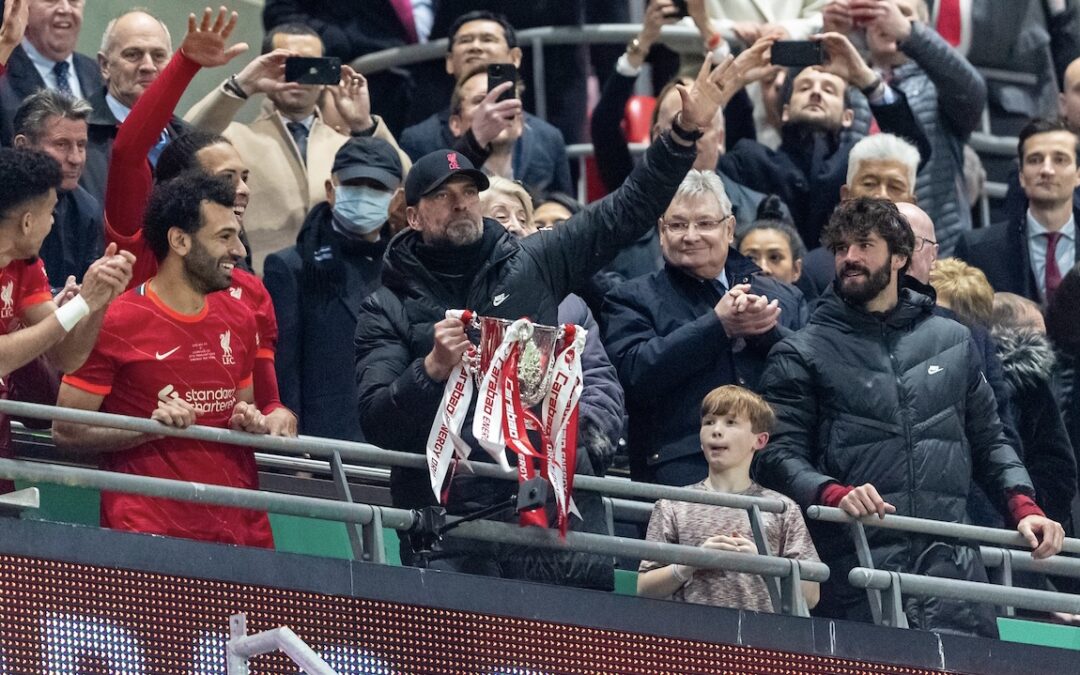 THIS is the story of a goalkeeper.

A goalie in the shadow of the best keeper in the world. But now a keeper who has just become an Anfield cup legend and a hero in the battle against doubt and questioning yourself.

Liverpool had so little doubt. The game was tough. Chelsea were excellent and deserved so much from the game, but the truth of the matter is that Liverpool were also excellent. They deserved more from the game and had no doubt. Every Liverpool player believes and their belief is returned with certainty.

The League Cup final is long. And it grinds. The ball hits the back of the net a number of times, but each time the offside rule means it doesn’t count. Chelsea fall foul of this more than Liverpool and, if it wasn’t for their errant play upfront, they would count themselves unlucky not to have won having hit the back of the net three times. But the truth is the play wasn’t errant; the truth is that Liverpool’s defending is excellent.

The first half is long. The match begins before it has begun. People have been debating Klopp’s choice of Kelleher over Alisson since he said he was sticking with Caomhin for all cup games – even this final. Was he putting emotion before winning? Should he have been more brutal? And then the squad controversies continue through the warmup as Thiago – who has been both our best and most important player the past few games – is out of action.

Have Liverpool put themselves on the wrong foot before the first kick of the ball?

Though in the first half, all looks well. The first 10 is Chelsea’s, but the 30 minutes that follows is all us. We dominate possession 65/35 and territory. We are controlling the game. Chelsea are a strong opponent, particularly defensively. They are proving difficult to break through, even for the likes of Mo Salah who is on good form here. Liverpool play through, round and across Chelsea with much time; but no nailed on chances until Naby Keita elicits a good reserve save from Edouard Mendy, before making a frankly tremendous save from Sadio Mane.

The second half opens with a Chelsea shot at 48 mins that pings off the woodwork. Had it tipped 2cm the other way it would have been in and there was nothing Kelleher could have done about it.

Meanwhile our possession domination is dripping away. By the 60-minute mark, possession is down to 58-42 to us. Our strategy is normally to take control of the game and grind our opponents down. Tire them out. It isn’t quite working here. There is a team that is getting tired and it isn’t Chelsea.

Joel Matip’s goal is ruled out, not because of anything with him or Sadio Mane and it takes some ruling out. It takes an age.

On the 63rd minute, Mo misses a massive chance. The clock is ticking down. It stays 0-0. Luis Diaz could get himself in a few times but the ball just doesn’t break. The subs make us less good at football but more good at running. Over time it makes us more good at thinking too – the game bends to James Milner’s will but Liverpool’s pace has dropped.

You start to wonder about the keeper’s selection. After all, Alisson is not just a goalkeeper. He is absolutely crucial to our distribution, to the shape of our game and to the consciousness of the team, and where opportunities lie. Is Kelleher just not the composite package for a game like this?

The doubt creeps in on the stands because the stakes are continually raised second by second. But Liverpool never doubt. Those players never doubt.

Extra time. The grind continues. Pass after pass our possession diminished. The manager brings on more fresh legs and you hope we can find some magic. But some magic never comes. You wait for the mistake. The mistake never comes. Trent Alexander-Arnold is exemplary. Wins every battle for 120 minutes.

And then. Penalties. So many excellent penalties, so many good takers. Liverpool’s takers have so much brio. Fabinho and Van Dijk get right in Kepa’s head. Kepa’s introduction makes huge sense in a game theory sense. But it is an introduction about doubt, not about certainty.

Liverpool have brio. Have certainty and no doubt whatsoever.

It all comes down to the keeper. The cup will be won or lost by the man Jurgen Klopp had faith in. What must that be like for a young person at the beginning of his career? A father figure like Klopp believing in you, even if you could be reasonably thought to lack experience if not confidence yourself? Can you borrow someone else’s confidence? Does the belief of others mean you can believe in yourself?

The camera cuts to Alisson Becker in the ground and he looks anguished. He’d take the pain away from the lad. Kelleher feels no pain.

An achingly long League Cup final, sudden death penalties, and the whole thing decided in the hands – and in the end the feet of Caomhin Kelleher. What confidence. What belief.

He is serene and thrashes the ball home top corner. Kepa follows and looks to follow. Wants to be as emphatic. Emphatic is difficult, though. You have it or you don’t.

Liverpool have it. They had it before a ball was kicked.

“Caoimhin Kelleher was the coolest man in the ground!”