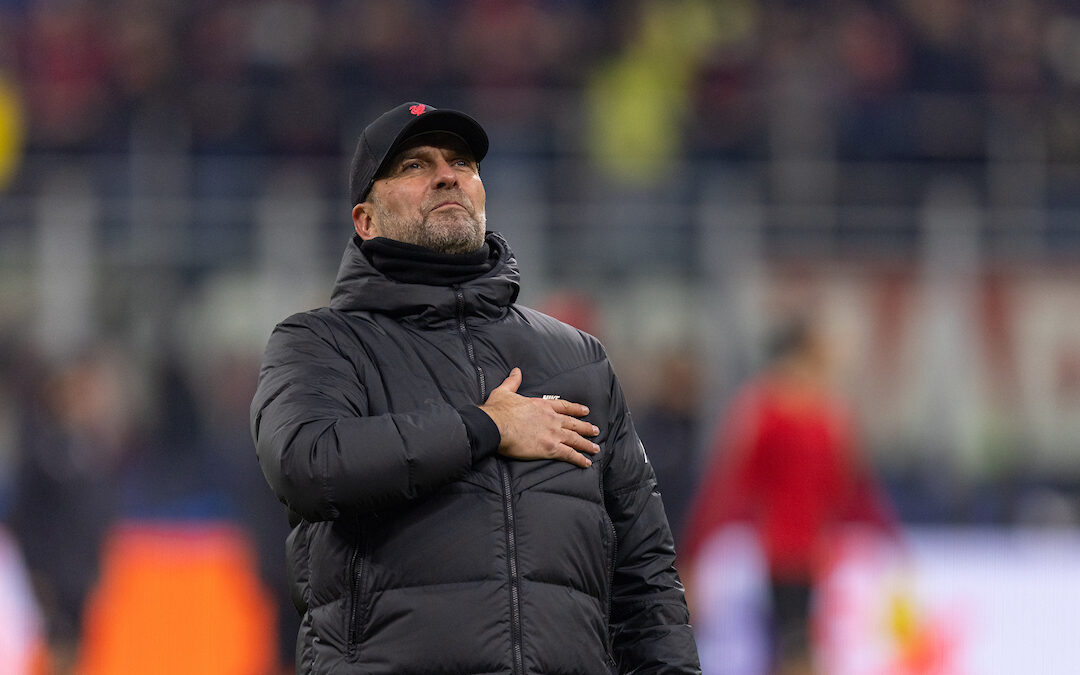 Match preview ahead of Inter Milan v Liverpool in the Champions League at the San Siro, with excitement growing around another big night…

AND just like that, Liverpudlians find themselves in the queue of a budget airline flight to Milan, as another European away-day beckons.

It’s been long — too long. It’s always too long when European football disappears for those two months. But it’s back, and The Reds are at the San Siro for the second time this season, this time to face Italian Champions, Internazionale Milano.

A year on to the month that skipper Jordan Henderson was playing makeshift centre-back at Leicester, Liverpool travel to Milan with a squad deeper than the drop on the ‘Pepsi Max’ in Blackpool. A forward line consisting of Sadio Mane, Mo Salah, Roberto Firmino, Diogo Jota, Luis Diaz and Harvey Elliott, makes mouths drool. Jurgen Klopp will be scratching his cap for a decision on the lineup.

Inter, on the other hand, possess potentially threatening arsenal such as Lautaro Martinez, Alexis Sanchez, Edin Dzeko, Ivan Perisic, Hakan Calhanoglu and Denzel Dumfries. They just about sit second in Serie A — an inch behind arch-rivals Milan leading the pack.

While Liverpool head to Italy after a win against the infamous Turf Moor boys, Inter come in to the game on the back of a frustrating 1-1 draw versus Napoli, where they conceded top spot to AC Milan. However, assistant manager Massimiliano Farris told DAZN: “We weren’t worried when we were seven points off top and we won’t be if Milan overtake us tomorrow.”

Despite the draw, Inter have been unbeaten in all competitions since their trip to the Bernabeu on matchday six, where Real dealt them a 2-0 defeat. Inter forward and ex-Man City man Dzeko emphasised the size of the challenge ahead of them on Wednesday night…

“Liverpool are favourites, we know it,” the Bosnian told Micah Richards this week. “But you cannot say 100 per cent one team will beat the other. We have a great team, too, and I’d say there will be lots of goals. We are both attacking teams. We are not a typical Italian side that stays back. But in games like this you have to defend well.”

It’s a fair assessment of how the game may unfold. Inter and Liverpool both record some of the highest xG tallies so far in the Champions League this season, though The Reds just edge them by .02 xG’s (2.06, to Inter’s 2.04). This could well mean that we’re in for a high scoring match.

Former Liverpool and Inter boss Rafa Benitez told Italian outlet Corriere dello Sport: “Inter did not reach the second round by chance: they are a team that always knows what to do on the pitch and is good at taking advantage of the weaknesses of others. His [Inter boss Simone Inzaghi’s] 3-5-2 is a module that can create difficulties for teams that are not used to facing him. On the other hand, however, there is a Liverpool with an offensive 4-3-3, which makes aggression and intensity its best weapons.”

“I don’t expect a double confrontation with a predictable outcome, but two interesting matches in which whoever has control of the ball will prevail.’’

Then comes the starting 11. Klopp could look to pair Ibrahima Konate with Virgil van Dijk tomorrow, but Joel Matip’s recent form might have a say in those proceedings.

The midfield, though, could vary. After a brilliant performance against Burnley there is no doubt that Fabinho secures his place in the holding role alongside Jordan Henderson, yet the last place in that three is debatable. Naby Keita played a solid 90 minutes of good football on Sunday for the first time in what feels like forever, whereas Thiago came on at ‘60 and tightened the strings as he does so nicely. There’s also a shout to be made for Alex Oxlade-Chamberlain.

Then you have the front line, which deserves an article in itself. Luis Diaz looks likely to play alongside Diogo Jota, but it will be very tough moving out two of that iconic front three. My brain is fried just thinking about the options, imagine being the fella who has to pick them.

In essence, the lineup doesn’t matter too much with the options we now boast. As long as we come out of that historical stadium without a defeat, I’ll be satisfied with The Reds.

“I love this trophy. This is the sort of tie you’re in football for, both clubs are European royalty. Liverpool are favourites but will still have their work cut out”