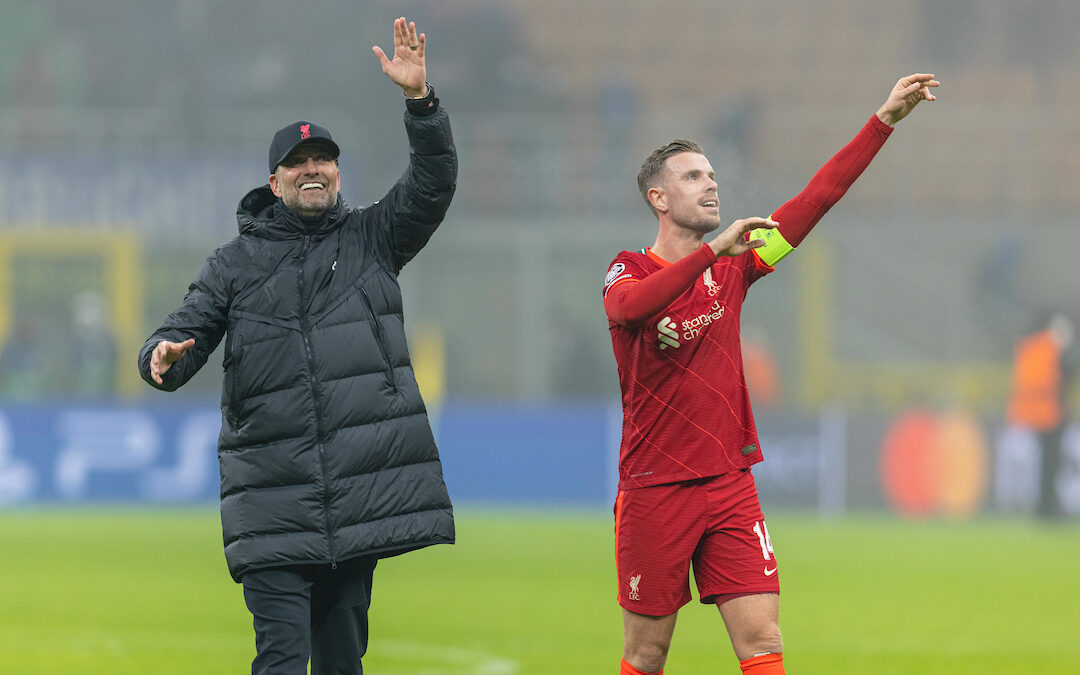 Neil Atkinson’s post-match review after Inter Milan 0 Liverpool 2 in the Champions League at the San Siro, as all The Reds have a great night…

Liverpool were going to the home of the Italian Champions, the side on whom all smart money will be expecting them to retain, the side for whom this was the biggest home game in just shy of a decade.

It was a fascinating encounter. First half, Inter Milan hurt The Reds meaningfully once, the ball hammered against the crossbar and away. At the other end, Liverpool keep nearly getting in. Last-ditch interventions and frankly odd patterns of play are all that stop The Reds first half. That and the fact that, for the second game in succession, they have more weather than they know what to do with. Last winter there was weather and his eyes they iced right over.

First half belonged to Fabinho. He was everywhere. He was first to everything. The midfield was his. Harvey Elliott and Thiago Alcantara were bit-part players. They were the supporting cast. So many waves Inter Milan attacks broke on his stoniness.

Then, after half time, something changed. I couldn’t tell you what. Trent Alexander-Arnold was exposed and under the circumstances did brilliantly time and again to just stay alive. Balls kept coming in. Ibrahima Konate, who had grown into the first half, stood up and was counted for two. He was impeccable while constantly concerning you peccability may just be round the corner.

But Virgil van Dijk was the main fella. The top dog. The cat’s pyjamas. There is this strange thing that happens when Virgil has to do all the defending all of a sudden. He does it. And keeps his general demeanour that he never has to do any of it. At best, it is a minor inconvenience.

Inter Milan make Liverpool suffer but without particularly testing Liverpool’s goalkeeper. To be clear — this makes me think they are a very serious proposition. They are looking for the eight or nine out of 10 chance. Not the pot shot. Lautaro Martínez nearly gets it but he cannot extend his neck.

Jurgen Klopp used one sub at half time, replacing Diogo Jota with Roberto Firmino presumably because he wanted Liverpool to link it more. He then did Jordan Henderson and Naby Keita into the middle of the park for Harvey Elliott and Fabinho. The latter felt a shock.

And then the football match played out.

Both Jordan Henderson and Naby Keita were marvellous. They reasserted Liverpool’s authority slowly and then quickly. The game went from in the balance to in Liverpool’s court in the blink of an eye. Inter may have tired. They may have lashed their chips. But Henderson and Keita took the game away from them. They shifted it faster, burst into space, kept it tidy and talked and gestured to their teammates. Liverpool suddenly looked far tidier. Us versus them.

What’s recently, weirdly, been frankly exhausting is having every Liverpool performance be the end of one Liverpool player or another. There is a constant projection forward away from the ever moving and shifting now. In a sense this is understandable — Luis Diaz (who replaced Sadio Mane when the two midfielders came on) is a sign of the future. He is what is next.

But today was a massive vote of confidence in what is now. Don’t get me wrong, Diaz can be what is now. Jota can be. The excellent Konate can be. But so can Keita, Henderson, Firmino and James Milner. Because it is now any trophies that Liverpool can win will be won and everyone in this squad has a role to play.

What is now is being ecstatic Mo Salah buys a ticket and wins the raffle. What is now is knowing Liverpool bring a two-goal advantage home that they may not have entirely deserved, but that their manager does for getting his changes so right.

What’s now is winning to nil and being deadly serious and suffering. What’s now is that every week has a new hero. But what should also be now is that a new hero shouldn’t mean a new villain. When the games come like this — massive and in quick succession — every single Liverpool player has never mattered as much. Every single one in every single moment has to be your favourite and if you don’t like that, if you can’t hack that, then you know where the fucking door is.

What’s now is that this is very, very real. Liverpool are in one final and have stepped forward towards the world’s biggest competition’s quarter finals. What’s now is that every game feels like a final. Suffering is now. Pulling through together is now. Finding a way is now.

Inter Milan play well in the now but that isn’t enough. We know this.

All of us. All together. They will all do for me. They should all do for you.

“It’s freezing in the San Siro! But when that Firmino header went in it was such a sigh of relief. The changes were massive tonight.” 🇮🇹