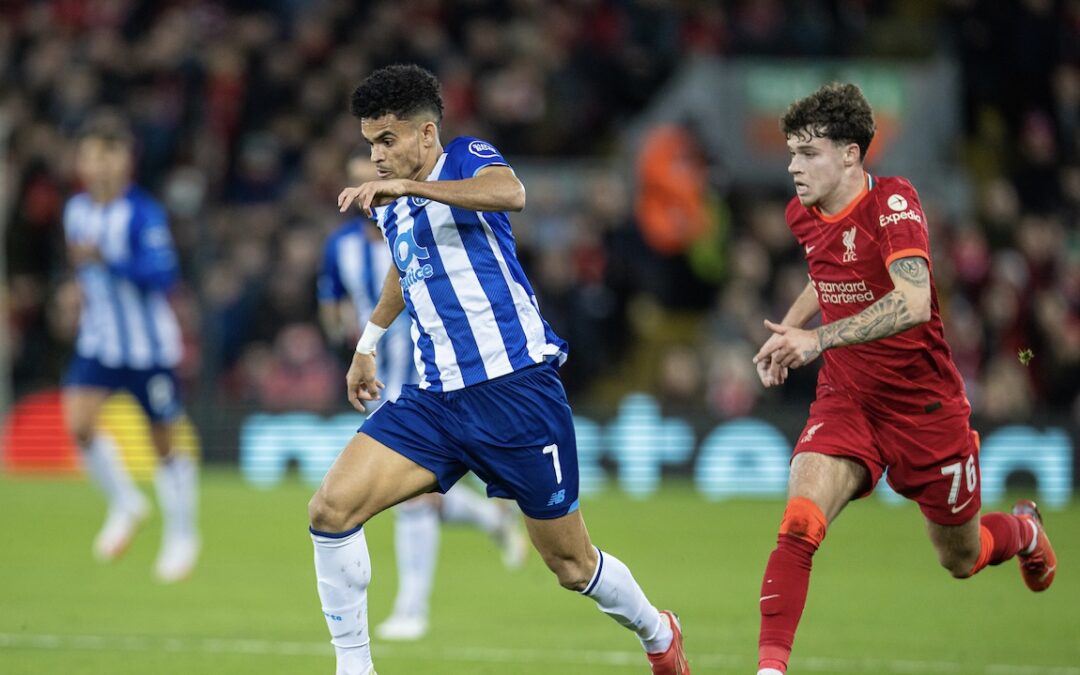 The surprise transfer news around Luis Diaz sent Liverpool fan wild, and it should serve as a reminder that these are good times for The Reds…

Out of nowhere, a transfer hijacking with delegations sent to international camps in South America. This one has had all the hits.

Luckily, we’ve all been spared the usual dry January from Jurgen Klopp and his players, which has gone a long way to keeping the transfer hounds of hate from the door and having Merseyside’s very first protest-off.

On Tuesday, Goodison Park hosted a show of vitriol against its ownership. Jokes aside, it was totally understandable.

While viewing images and videos online, I was immediately drawn to the white sheet beautifully adorned in blue spray paint which posed the question “Good Times?”

I loved “Good Times?”, I’ve been thinking about it all week. Did the person who made it wish to pose a more elongated and purposeful quandary about why the fuck we let football add to the woes of a wet, dark and cold Tuesday night in January, protesting about who knows what anymore?

Were they referring to those work events which suitcases of wine are smuggled in (you know the ones)? Were they hankering for a simpler time in general, or asking if we’ve ever had one? Perhaps it was a nod to the days when everyone knew where the Arteta money went.

The Ev would be the first to remind me about stones and glass houses, here. And yes, Kopites, True Reds and The LFC Family can all be fractious to the point of division, particularly around Liverpool’s transfer activity.

Yet we woke Friday to the news of Luis Diaz’s now seemingly imminent transfer from Porto, and I was left unlike many feeling unsurprised.

Should we be shocked that Liverpool can flex this type of muscle at any point they wish? They forage into the market only for the right fit and have a higher place in the food chain than we care to realise.

For that reason, Diaz will likely have been hoping that Klopp was no longer willing to wait it out. To place yourself in his shoes for a second, why wouldn’t you?

You’re at the prime age to make a developed career progression, there are clear examples of players who have been elevated to world-class status in a similar position to you and then the obvious romantic element that comes with Liverpool.

There’s still every reason to feel like this club is the lottery win — the place in which dreams go to be realised. Diaz represents a small number offered the opportunity to stand on stage. It’s another clear sign of potential quality over quantity.

It’s that quantity that can often mislead. Liverpool haven’t relaxed since the summer of 2018 in the manner many think.

Over the course of recent transfer windows there has been tweaks in the form of Thiago Alcantara, Diogo Jota, Kostas Tsimikas, Ibrahima Konate and not to forget last January when Ozan Kabak and Ben Davies were brought in to stem a crippling centre-back crisis. Kaide Gordon is quietly having his own breakthrough period aged 17 years old.

All the time, the average age of this squad comes down and a fundamental area of the pitch is replenished. Everyone expected the rebuild in bulk. The Houllier/Thompson picture in the Main Stand with shopping bags of footballers in Liverpool kits home and away.

That isn’t this Liverpool — come to think of it isn’t even the same stand. The point is the transition and evolution is happening in real time. Competence breeds a reassuring quiet at times. The ability to be pleasantly surprised should be savoured.

The ultimate test will remain not with a player unlike Diaz, but more in the Jude Bellingham mold, when valuations are worlds apart and the premium they don’t want to pay for someone they truly want is applied.

For now, Liverpool seem to have picked up a gem with all the ingredients to make those at Kirkby hungrier for what can be achieved.

He will solve a ton of issues we’re yet to see. He will go on a journey in front of our eyes. He might end up with a Columbian-based chant to mirror his name.

There will be those who have no interest in praising anything transfers related, with firm flags in the ground regarding the owners and strategy.

If you can’t rouse any slight Friday transfer excitement on an international break then I can’t help you. In truth, I gave up a long time ago.

“What has changed? Porto reduced their demands significantly.”

“And the fact that Spurs were keen to bring him, for Liverpool it became a case of now or never.”@JamesPearceLFC🗣