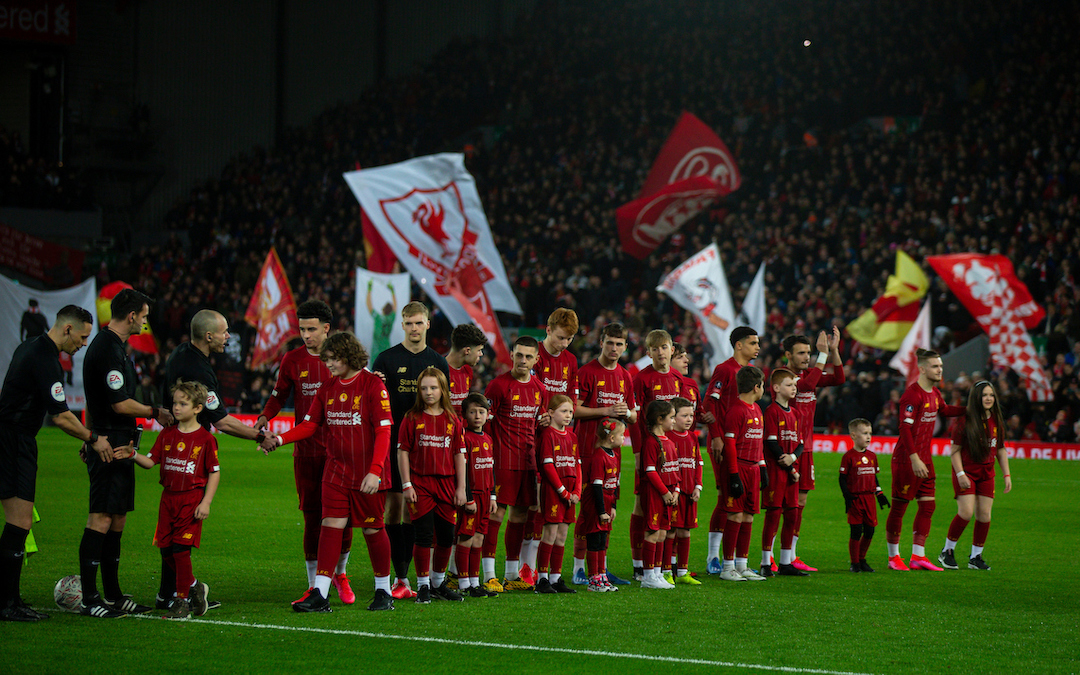 Match preview ahead of Liverpool v Shrewsbury Town in the FA Cup at Anfield, with a much-changed side is expected after a mad week…

SO this game is on then, yeah? Great stuff. That ought to boil some piss, eh?

These recent times have had me reflecting on the past couple of seasons and I realised they are starting to feel like a bit of a blur to me.

I hope that one day I can reflect more clearly on a period of sustained success for The Reds, but with every day that passes my concerns around them not getting their hands on more silverware grow.

Let’s get this clear first and foremost: I want Liverpool Football Club to win every trophy it is possible to win in a season. I want calendar years like 2001 where they just can’t stop conquering on both the domestic and European fronts. However, I want the league to be the focus of that above all else.

I don’t believe for a second that Jurgen Klopp harbours any kind of ill will towards the FA Cup or the League Cup, but I know for a fact he sees the number of games his players have to play in a short space of time as too much and therefore has to prioritise rest where he can. That doesn’t mean he doesn’t want to win those cups or treat them with ‘respect’.

This season is one of the toughest our manager has had to deal with in terms of the schedule and other factors out of his control — and I include whatever the hell last season was in that. This week feels like a culmination of all his worst nightmares on that front.

It remains to be seen whether he’ll return to the touchline tomorrow, though my working theory is that his number three Peter Krawietz taking the press conference means they’re optimistic he will. Given it’s likely to be a youthful team, surely they’d have put up one of the youth coaches to talk and manage instead if Klopp and Pep Lijnders weren’t available.

Just how young this team will be is anybody’s guess, and Krawietz was giving very little away in his press conference — besides seeming to hint that recent loan returnee Leighton Clarkson will be a part of the squad.

If we work off the last team we saw against Chelsea, we can only assume that Caoimhin Kelleher will continue in goal. I expect that Conor Bradley will be joined at full back by Owen Beck, with Joe Gomez likely to captain the side and do so alongside Jarell Quansah. If Klopp looks to go stronger he may look to Ibrahima Konate instead to keep up his rhythm.

In midfield, I’d expect Clarkson to get the start with Curtis Jones and Tyler Morton — another chance for Curtis to lead by example in a young side, on a stage he is absolutely no stranger to. Clarkson and Morton can both thrive off the stage too, as well as their teammate’s energy.

Upfront, I’m sincerely hoping that Takumi Minamino is fit enough to get the chance to shine in the domestic cups again. If he isn’t available, I expect to see Kaide Gordon and Neco Williams on the left and right respectively, and I’m going to guess that Alex Oxlade-Chamberlain will take the number nine spot — assuming that Divock Origi is also still absent.

Whatever personnel we see on the pitch and the bench, I’m excited to see another youthful team take to the Anfield pitch in the FA Cup. Some of these young lads have really shown themselves on this stage already, and hopefully a few more will get the chance to write their names into our history.

And who knows. It could be the start of a run that sees this team getting that silverware they deserve. Maybe then we’ll see just how much Klopp respects the cups.

“We all would like an FA Cup run and to be going into April with there being loads of opportunities for a brilliant season.”