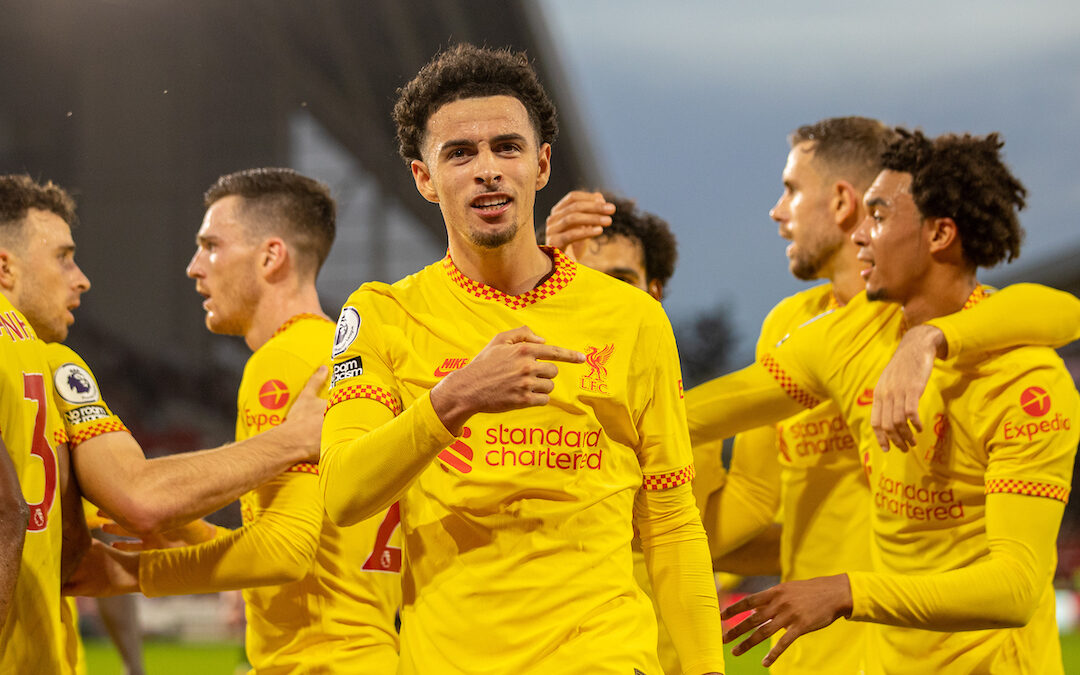 Match preview ahead of Liverpool v Brentford in the Premier League at Anfield, and it could be time for Jurgen Klopp to shake things up…

“LAST night we didn’t miss speed, that was not our problem, or pace, whatever you want.”

“We have to play against deep formations, in between the lines, all these kind of things. There’s quick thinking – much more important than quick running. Yes, Mo, Sadio and Naby, they can think quick as well but they are not here, so the rest can do that.”

Those words from Jurgen Klopp the morning after another disappointing result for The Reds stood out to me. It was another game in which Liverpool toiled and ultimately came away with nothing to show for it. A microcosm of recent times, in some ways.

The worry is not necessarily that this team can’t go to the Emirates next week and get a result. Arsenal will have to show their hand a little more and the likelihood of them going down to 10 men again — especially with Granit Xhaka already banned — is slim.

Instead, the concerns are that the first leg draw could set a precedent for sides who will look to frustrate Liverpool in order to find a way home. There are a lot of them in this league, and Brentford coming to Anfield will almost certainly be another.

It is up to these players — minus Mo Salah, Sadio Mane and Naby Keita — to show their opponents the way to go home. Don’t let them find their way, and definitely don’t hand them any blueprints.

Far too often this season this side look as though they have run out of ideas, and when the pressure starts to ramp up they have left themselves open in some crucial moments. That’s what has cost them in the title race, now they can’t let it cost them in the other competitions they are chasing.

So what is the way home for Klopp’s Liverpool? For years we have said that the ‘Plan A’ has been so good that we haven’t needed a ‘Plan B’. Often any problems have been fixed from the bench, by bringing lads into the fray that aren’t too far a step down in quality to get the job done.

The problem is that the ‘Plan A’ requires almost all its composite parts to be in place. Since the pandemic began this has just not been the case, and we can’t just look past our own role in allowing that to be the case.

So it’s surely time for some kind of ‘Plan B’. I’ll never be able to tell Klopp and his staff how to do their jobs with a straight face, but it feels like we need an injection of something new. Something that the opposition can’t properly prepare for.

To my mind at least, that is a change of shape. But how does that look?

I’d go again with the same back five that played against Arsenal, asking for more of the same great interchanging play that Andy Robertson has shown in recent games, and asking for a lot more from Trent Alexander-Arnold than he showed on Thursday.

In midfield, I’d have Fabinho as the anchor, Jordan Henderson to his right, Curtis Jones to his left, and Alex Oxlade-Chamberlain at the tip of a diamond formation. The increased numbers in midfield can offer us more in terms of creativity, legs and, crucially, thrust. Quick thinking and quick movement.

That would also allow Diogo Jota (left) and Roberto Firmino (right) to return to more natural positions. Jota seemed stifled by the great central movement of Takumi Minamino against Arsenal, before Taki showed that he doesn’t quite have the same instinct in front of goal as his teammate. It’s absolutely crucial we play Jota in his best position this month.

As I say, I’m in no position to tell Klopp and co how to do their jobs, and I’ve absolutely no doubt in my mind they’ll figure it out. I just hope they do so before this season gets even further away from us.

For the first time in a long time, some doubts are creeping into this fanbase. Make us believe again, Liverpool.

“We can talk them up, but if Liverpool turn up we will get the 3 points… It’s also up to us in the stands to turn up and help the lads out.”