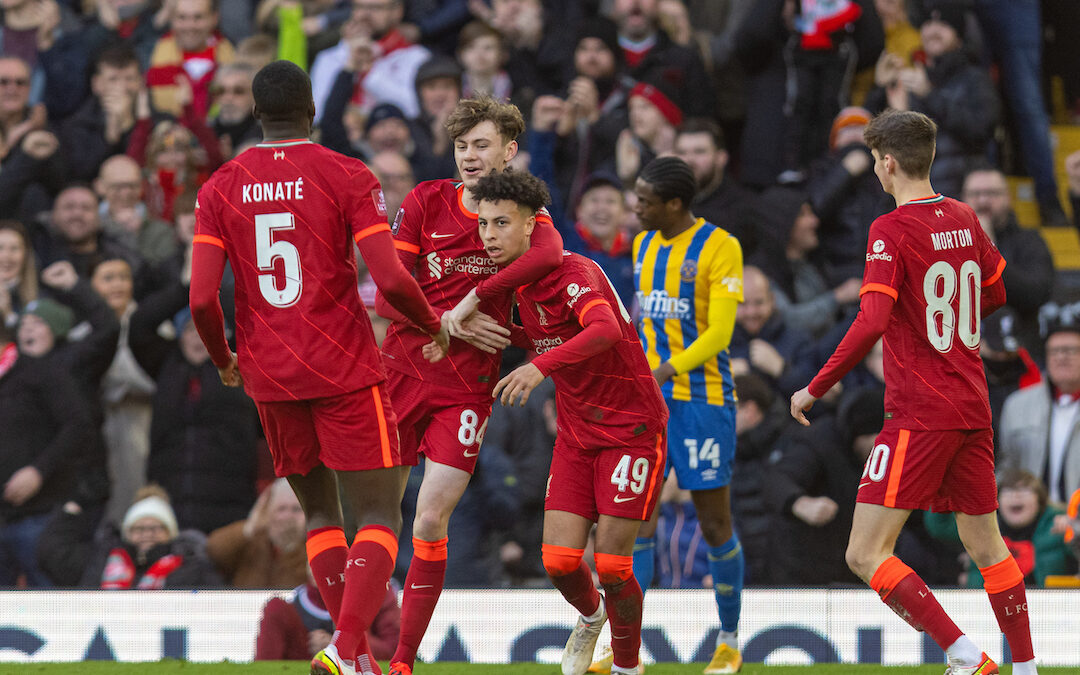 Neil Atkinson’s post-match review after Liverpool 4 Shrewsbury Town 1 in the FA Cup third round at Anfield, and it was good fun to watch…

WELL that was fun, wasn’t it?

There is a specific type of pressure here which normally isn’t present. It is this: you may not have seen the game. Therefore I may need to act like a grown up and describe some events.

Ultimately, the fact you may not have seen the game will have rattled some when Liverpool go 0-1 down. Suddenly there is the chance of a shock.

Their goal comes from Connor Bradley not blocking the cross for the second time in five minutes and this time there’s a lad taking advantage of Liverpool letting the ball come across and he slotted emphatically. Daniel Udoh took advantage like nobody’s business. It was probably the best moment of his career and the whole game the most enjoyable experience of his life. I hope so, anyway.

Bradley’s only feet wrong were those two. He was very good indeed. Perpetual with his movement, knowing when to come narrow and fly wide. His touch was excellent. His defending occasionally a teeny bit last ditch but he did his job. He is a footballer who will be a top flight player. He’s got a brain, he’s got a touch and he’s got genuine will. He was arguably the pick of Liverpool’s younger contingent across the 90.

But for one key moment the pick was Kaide Gordon. Liverpool equalise through his sheer calm in the penalty area at The Kop end. It was the sort of goal which, if it makes it 4-1, we can shrug off. However the pressure was on and there he was. Certain. Assured. It was his first goal in front of The Kop. I’d be amazed if it was his last.

It changed the game. Prior to Gordon slotting it was hard to envisage where an open play Liverpool goal came from. Liverpool were jammed playing in front of Shrewsbury. Tiring them? Undoubtedly. But stretching them to breaking point? Absolutely not.

Suddenly, though, every Liverpool player felt it was a game Liverpool could score in and acted accordingly. As we approached half time, Liverpool’s control became something active rather than inevitable. The goal was coming and there it was from the penalty spot; Fabinho’s spot kick a belter.

Straight after half time Marosi does brilliantly to deny Elijah Dixon-Bonner after great work from Andy Robertson. It’s the goalkeeping equivalent of the Udoh goal. An absolute belter.

Shrewsbury try to get at Ibrahima Konate and Virgil van Dijk but both are good and no nonsense. Van Dijk would try and play more with a conventional Liverpool side but, further, it is worth remembering these lads may never have even trained together given the events of the week. Van Dijk empties and I like it.

Roberto Firmino makes it three with a delicious backheel at the perfect moment. Shrewsbury know the jig is up and Steve Cotterill, who conducted himself brilliantly before, during and after game, made three subs in the manner of a man knocking his king over allowing for the idea that the king in question means three more players get to play at Anfield.

Fabinho’s second and Liverpool’s fourth comes the other side of a bad challenge on Andy Robertson and the introduction of Melkamu Frauendorf, who won more tackles than he did complete passes. He was rangy and direct and a laugh. The tackle on Robertson was anything but a laugh but hopefully he’ll be fine.

Fabinho’s finish emphatic and Liverpool quadruply home and hosed. Curtis Jones got a full 90 that looked agonising but he was excellent for an hour. He started in attack but was moved into midfield to solidify The Reds.

The draw sees Cardiff City in the next round and means Liverpool have had something approximating back to back kind draws in the FA Cup for the first time I can remember under Jurgen Klopp.

It should mean more fun. More to embrace. Another opportunity to see all of these. They will, like you, do for me.

“Kaide Gordon is so calm and collected in the penalty area. That’s my big take away from today. We could have seen the start of something special there.”