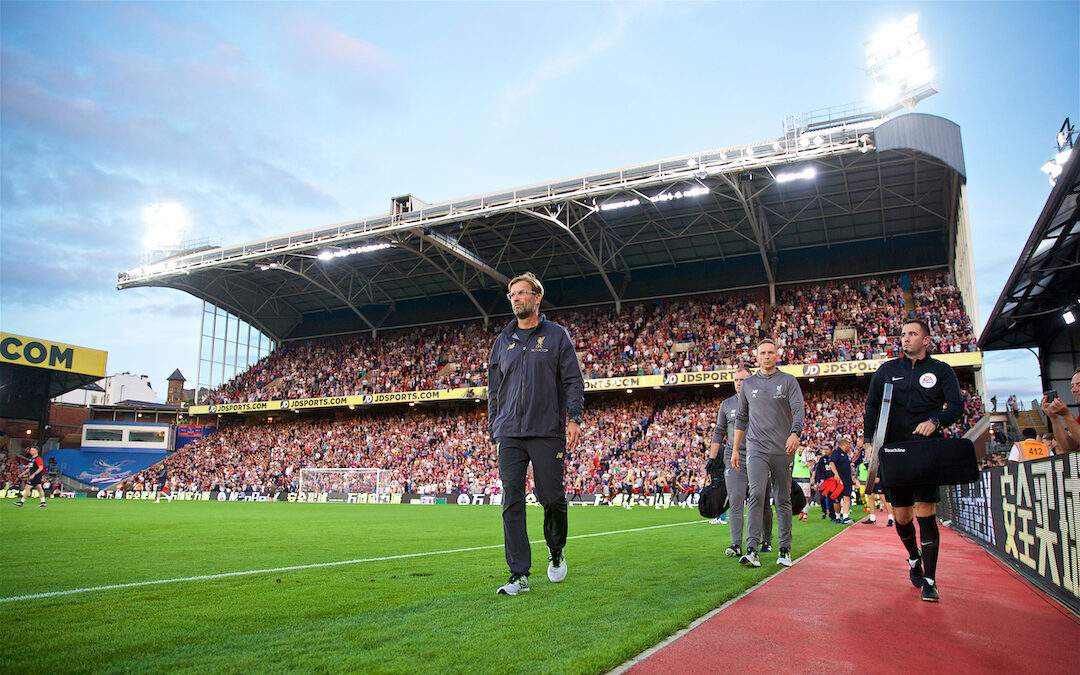 Match preview ahead of Crystal Palace v Liverpool in the Premier League at Selhurst Park, with a future trip to Wembley on our minds…

IT’S good to be able to plan a Wembley trip again.

It’s something of a benchmark stadium in my Liverpool-supporting adult life, each visit I’ve had has felt like a microcosm of the club’s situation at the time.

My first time was the worst time. Aston Villa v Liverpool, April 2015. It could well be the worst result of the last decade, it was really that bad. It was the nightmare ending for Steven Gerrard’s Liverpool career. It felt like the beginning of the end for Brendan Rodgers too. Displays that bad can never be swept under the rug. Change was needed.

I was back within a year. Liverpool v Manchester City, February 2016. It’s easy to forget how good we were that day. We’d done well up until a Simon Mignolet mistake cost us a cheap goal. The Philippe Coutinho goal is another great forgotten let off. Our first final under Jurgen Klopp and we were unlucky really. Small margins could’ve won us that cup, but it was a start.

I was there when we battered Barcelona in pre-season. August 2016. That one feels slightly less consequential but it was a lovely day and Marko Grujic scored the best header I’ve ever seen, so it felt worth of note for that alone.

Fast forward three years and I’m back. Liverpool v Manchester City, August 2019. The Champions of Europe versus the Champions Of England, the two best teams in the world. The Reds didn’t start great but arguably should’ve won by the end of the 90. We ratcheted the pressure up, over and over again. We lost the battle, but won the war that season.

I can’t wait to go back now. I loved that Arsenal semi final and all it was, and I want to let those lads know how much I appreciate it and them. I want them to have something to show for it too.

The same goes for this Sunday, and the same team should go again this Sunday. Save for Alisson Becker coming back in for Caoimhin Kelleher. I’ve been seriously impressed with Kelleher, so much so that it almost feels harsh to say I’d drop him back to the bench for this one. But we’ve got the best in the world waiting in the wings, so we’ll all be fine.

I’d also bring Takumi Minamino back in for Kaide Gordon on the right-hand side. Again, that’s no slight on Kaide but he’s still so young and we should be careful with him. If Alex Oxlade-Chamberlain is fit enough it won’t even be a question, but Taki did well when he came on in that right forward role on Thursday. He deserves the chance to start there.

Elsewhere I’d go the same and I think Jurgen will too. There could be question marks about Joel Matip and Andy Robertson, particularly around the fitness of both, but there’s a break next week which will allow them a bigger rest. Any questions about Matip performance wise are far too reactionary for my liking. He was our main fella before that poor 45. He’ll be fine.

We’ll all be fine, I’ll say it again. We can get very doom and gloom at times, as a generalisation of the entire supporter base, but these really are the days. It’s been so much worse than this. Wembley trips tell that story for me. There’s another on the horizon now. But first we face Crystal Palace.

Make it count, Liverpool. Keep giving us these days and feelings. We’ll look back on them one day and smile.

“We have sort of stumbled into this way of playing Jota on the left and Bobby down the middle, even without Mo and Sadio, we are creating excellent chances.”