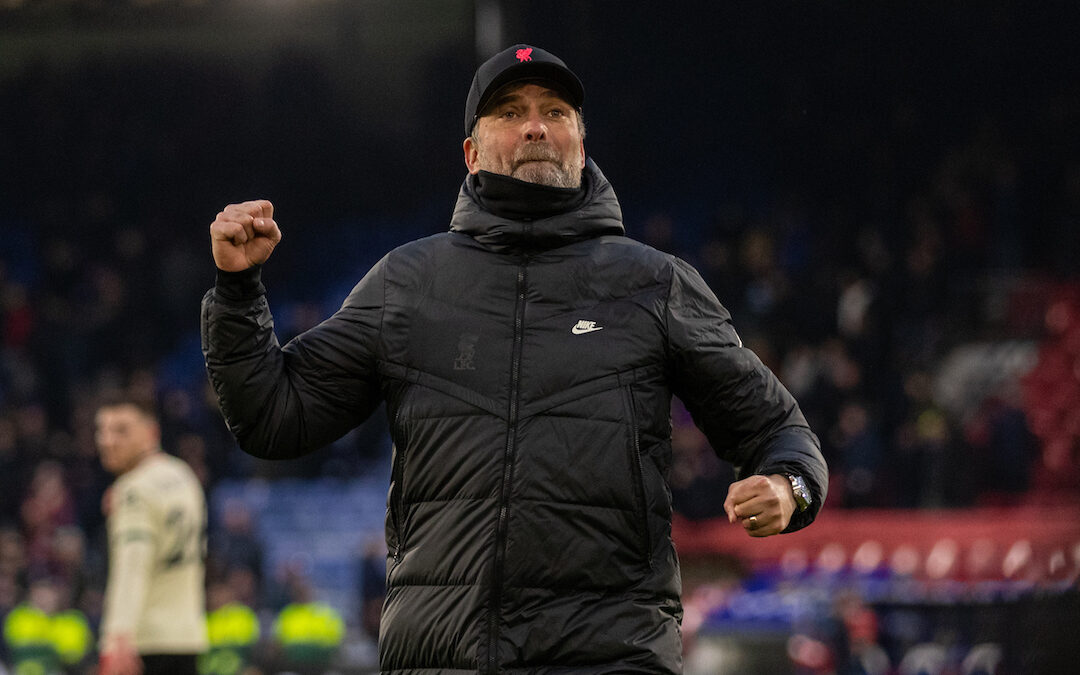 Neil Atkinson’s post-match review after Crystal Palace 1 Liverpool 3 in the Premier League at Selhurst Park, as The Reds put more narratives to bed…

THE endless desire to find the reasons to make any game interesting kills me.

I am concerned about this because for those of us watching at home we were treated to a pretty poor show on the broadcast today. Liverpool are playing Crystal Palace. We have played them many times since 2014, but at every twist and turn the story of this game is deemed to be a potential repeat of that year’s match at Selhurst Park.

I know that football narratives are pervasive and that lazy packages love them. I know that 2014 was a big old event in their anti-Liverpool lives. But anyone banging on about it, still, now, gives themselves away: Liverpool’s disappointment is what they are in this for. Because 2014 has nothing to do with any of these players on the pitch. It has everything to do with the smallness of mind and bitterness of heart in the lives of many who cover The Reds.

As ever, we can do it again. That night was among the proudest I have ever been of any Liverpool team. They tried, under massive pressure, to win 0-10. Something not been done before or since by anyone.

They weren’t as good as this Liverpool side. They were breakneck and beautiful. They were a ride. It makes me smile to remind myself of them. Presenting them as failures, as heartbreaks just reminds me that those who do it don’t know what it is when a football team offers you the gift of being alive in technicolour; the gift of the cartoons in Roger Rabbit, framed by the drab; the gift of hanging on to the people around you, face moist with sweat and tears and delight. The television sequences prompt that. Not misery.

Today is today. These players aren’t dwelling on eight years ago like I am and the television are. But today, god, today.

We are far from perfect today. Liverpool have two important things to learn from today’s match.

1. Passing. Must be better. We have lost sharpness and accuracy somehow and we need it back. Where it is younger players such as the side that took on Shrewsbury, that’s OK. But Curtis Jones has to do better if he is going to become a permanent fixture in this side, and both Jordan Henderson and Roberto Firmino need to look after it better to remain permanent fixtures. For all three the issue is when the going gets tough.

We know it is thankless what we ask of our midfielders and central striker. It’s them the onus falls on at hard times. But then they want to be counted. They just need to be a soupcon more sharpish when it is all on top.

2. Shape. We are too narrow for whole periods of the game. Trent Alexander-Arnold gets a knock after about 60 minutes and that makes it even harder to keep our width. But we look shapeless from the moment the teams come back out in the second half. It looks like Palace will score because of it. And they do.

The line kills but it also is a reward, a way home. It’s more the idea that just dropping for five here and there could help everyone.

Beyond these gripes, we are generally very good, especially in the first half. Virgil van Dijk has them well sorted out and then he scores a perfect header. Alex Oxlade-Chamberlain similarly makes use of our dominance and scores what is a hard chance to take himself to two goals in two games for the first time in a very long time.

Andy Robertson is a peach and Alisson Becker is just resplendent. You’ve never seen a sight like him. His hair unkempt, askew, his beard grizzly, head to toe in black. He’s the most magnificent. He’s Nick Cave singing about sex and death. He’s Johnny Cash in Folsom. He’s Janelle Monae.

Crystal Palace are good and have speed and direct running in their side. This is crucial in their approach to the second half. Vieira has worked out that if his team gets a break, they should play the percentages on the offside and make a run for it. This plan gives Liverpool the yips at the back. Then finally their smash and grab works and they get one back via the speedy efforts of Mateta and Edouard who pulls off side, passes, and then draws back in to score. Nicely done.

Liverpool look a bit shaky. But Diogo Jota never says die and makes a great run for goal on 87. The Palace keeper trips him and after some intervention by the video refs, Liverpool make ii 3-1 with a Fabinho penalty. And that’s that. The nation crying another comeback in flops to the ground. You’ll have to do better next time.

Liverpool continue to scrap and battle through this challenging season. They aren’t perfect. But they are fighters, and that’s enough for today.

Dwell on the week. After Arsenal at home, after Manchester City beat Chelsea, there was a staggering amount of doom and gloom. Nothing would ever be right again. Football was impossible. Liverpool have solved nothing but they have lit a lamp in our dark, in our gloom.

You show me 2014 at Palace and I see a Liverpool team trying to win 0-10 because it was the only option left. What I want from every Liverpool side is that it stays on until the bitter end. Today they did that. This week they have done that. This season, these lads, our lads they will do that.

Their courage will make it a joy. Liverpool can win four trophies. Liverpool can win none. Liverpool, like this good Crystal Palace side, like you, are a ride. We do it till May, we do it altogether, we go dancing, you and I, because we haven’t for too long and it is all I want to do. Go dancing and keep claiming the three points by hook or by crook.

Twenty-two down. What a ride. Giddy up.

“Liverpool struggled to ramp up their advantage but they saw it out and that’s a huge positive. The goalkeeper got them out of trouble but that’s what he’s there for!” 🇧🇷🧤