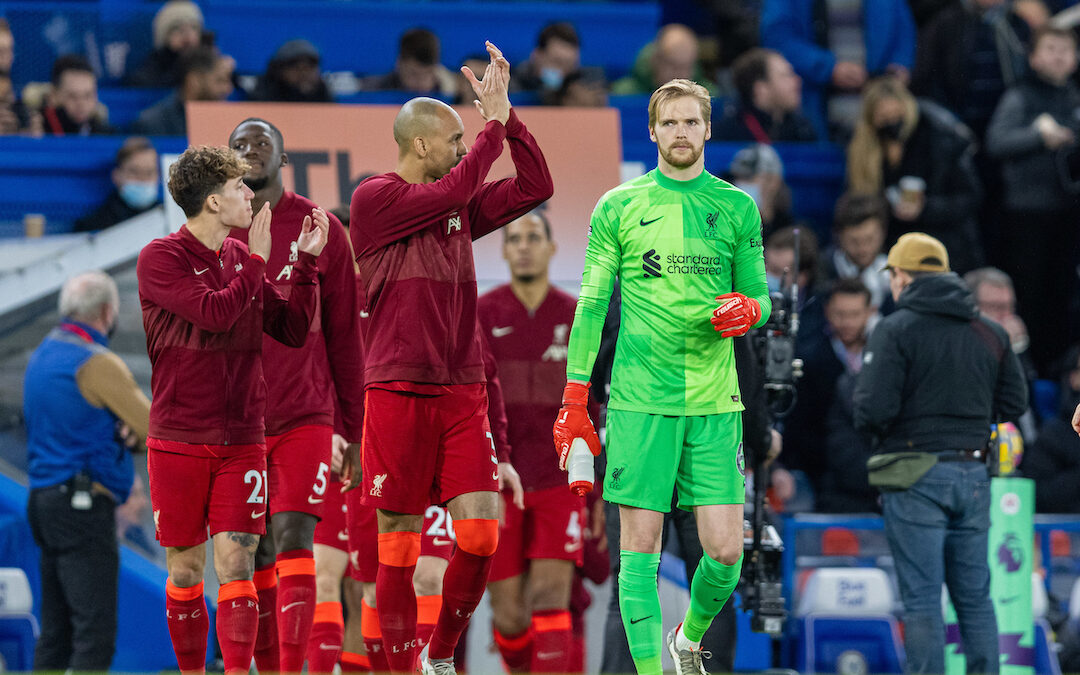 Neil Atkinson’s post-match review after Chelsea 2 Liverpool 2 in the Premier League at Stamford Bridge, as The Reds play out another classic…

YOU felt it. You felt alive.

2. They were involved in a classic.

But if you want to win this league, right now, in this reality, then this is buttering absolutely no parsnips.

Christ it was good. The first half left me breathless and over and over I couldn’t believe the sheer courage of both sets of players. I had never seen the like in a lot of ways.

Chelsea shocked me. They went and played right there. They were clever. A dummy runner would be offside, a second runner almost, a third on. The ball hits the third and he has two options but doing all this takes six or seven players out of the game.

Imagine the sheer heart to do that. There wasn’t a cowardly lion to be seen. Then Liverpool would overcommit on transition. Six men high to be turned around.

For 45 minutes it was all of the football from the previous decade distilled into one half. It was incredible. Magnificent footballers backing themselves and coaching setups that backed them further. It was breathless stuff, a game about space and exploiting it.

It was a classic. It really was. Adam Melia kept saying to me “I’m sick of classics” and he is right. Ben Johnson kept squawking at me about Virgil and our line and he was right. Our line was berserk, in the way astonishing works of art are berserk, in the way a night out can be berserk. Berserk is a policy. As a policy.

The game hits hard. The game slaps. The game is a better night out than any of our new years. The game is Doja Cat or My Bloody Valentine. The game wants you to turn it the fuck up and frankly Martin Tyler isn’t capable.

Four incredible goals in the first half shake West London down in this earthquake of a game. If this is heavy metal football, Germanic, loud and fast, then the first half is appropriately played at blistering pace.

The Chelsea press is on Liverpool’s toes every minute. They try to shut us down at every angle and for some time in this game succeed. Let’s be real. Chelsea have underperformed in the first half of this season, and Tuchel, Azpilicueta et al all know it. It is revenge time and they are stirred up by being the also rans in the title race so far.

James Milner is not the man we’d start a game of this nature but Christ does he fucking define it. He is first to everything. He makes N’Golo Kante’s life a living hell. But N’Golo is into that sort of thing and embraces the idea of the battle. He grows and grows.

Sadio Mane is exquisite for the opener when it looks artisan. Mo Salah is miraculous for his goal. The greatest player you have ever seen. What Mateo Kovacic does for his is staggering. It is one of the finest goals I have ever seen and up to that point only he could live with James Milner.

Jordan Henderson is both sloppy and trying to score for their equaliser. This Liverpool take no backward steps and I am not sure if that is a good idea.

But they had hard lines. They do some excellent shell defending second half. They don’t allow an easy chance. The keeper is excellent which comes as a relief. They do enough for a third but then so do Chelsea.

So do Chelsea. There is an issue here. We are watching simultaneously the second and third best sides in England this season and the second to fourth best teams in Europe.

If Liverpool had been in fewer classics or had fewer hard lines they’d be closer to the top of the pile. If Liverpool had been less electric they could well have four more points. It’s painful, that realisation over and over but these games have a kinetic energy missing from so many of our lives right now. Liverpool are the best night out when we lack nights out.

But, ultimately, I’d rather have points. I’ve spent a lifetime dancing on my own. I know the ropes.

Right now though, we do get to dance with one another again and still. So let’s embrace that. We need luck from here. We have a hill to climb. But let’s climb it together. Let’s climb it dancing. Because the hard lines, classic Reds to be proud of won’t have it another way.

Fuck Beckett. Because try again and fail again but fail while dancing and living. Dancing on the edge of it all and feeling everything in that moment. Tonight Liverpool made me feel alive. It isn’t only Liverpool that can do that but my god can this Liverpool team do that. They put everything on the line. How often can any of us say that?

Good and all. Good until good isn’t enough. Good because feeling it is everything.

You felt it. You felt alive. And I thank you.

“A disappointing result, I thought in the second half Chelsea looked the more likely to win. It just felt like we were losing it in the midfield too much…in my mind we need to just focus on the cups.”

🎥On the Whistle | Out Soon