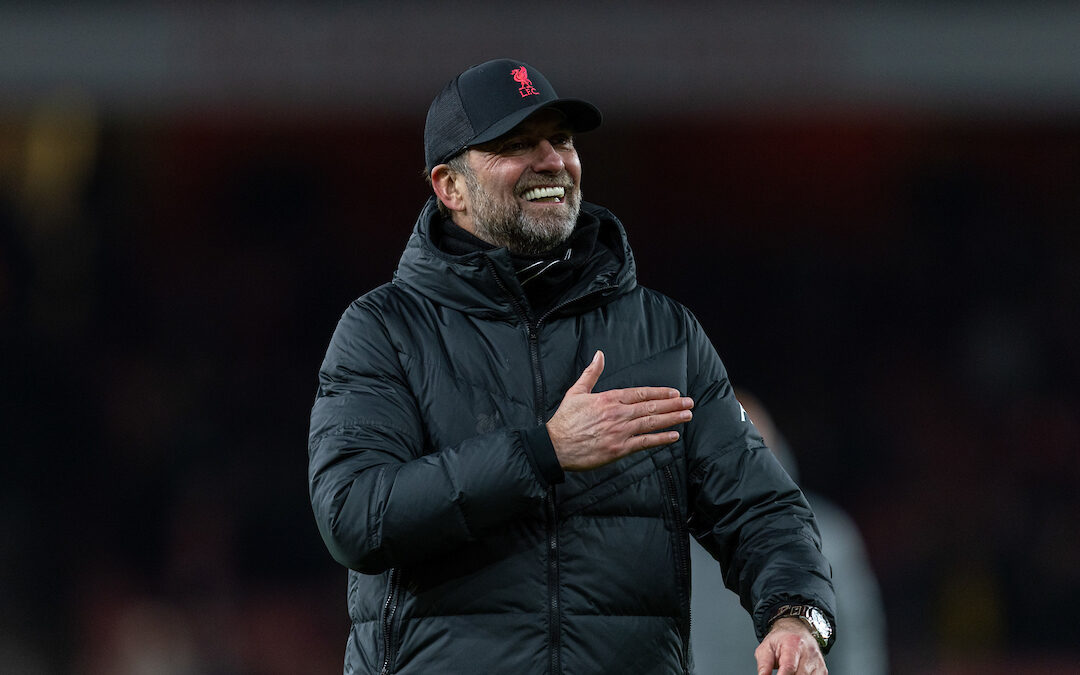 There are the Mighty Boys In Red (yellow).

At half time I felt like I was watching the third or fourth best 11 in the country face the sixth or seventh away from home. By 90 I knew I was watching one of the very best teams in Europe play a side a couple of rungs down.

Diogo Jota has been truly excellent for Liverpool since signing. He has been the antidote to the idea that no one can even think about challenging this front three. He has challenged and challenged.

But who has he been challenging? The greatest footballer on the planet in the calendar year just gone who has won the big two? The player who, in 2019, dragged Liverpool to trophy after trophy? The player who has scored the goal to make Liverpool World Champions, who has boxed us so often especially away from home?

These are three Liverpool legends.

It happens to all of the greats.

I love it. It’s what it is about. We need Liverpool to follow it up obviously. We need to win the final. But the truth is that those two goals are what greatness looks like.

And those two goals are what greatness are based on. Do you think he will score in a Champions League semi-final? I do. A Champions League final? Let’s hope. But let’s expect. Performance is a thing.

Before we went on stage in Boston in the summer after, in 2019, I lost my head and Jamie Webster gave me such a bollocking and, simultaneously, he showed me such care. And there it was. I was sound. In Madrid in front of 60,000 Jamie owned the gaff; he was marvellous. Some people love the crowd, love the moment.

Can I tell you a secret? You never know who or how anyone stands up and is counted under pressure until there it is. And tonight Diogo Jota has shown us he can do the business but he’s shown us he is the business.He can be the biggest game in town in the biggest moments. This lad can win us everything this season, which means we have four lads who can play upfront who can win us everything. Before we get to midfielders, full backs and defenders. Before we get to goalkeepers.

Goalkeepers. At the other end of the pitch the fact is that if the worst happened and Liverpool had to play a crucial European game and Alisson Becker wasn’t available, then we should shrug. We should acknowledge it isn’t ideal. But we should know we could never hope for any better in terms of Caoimhin Kelleher as being Liverpool’s second-choice goalkeeper. He has shown his worth. He has done the decent thing. He is our guy and showed why tonight.

Joel Matip had a weird first half. The pitch seemed odd. Both full backs were incredible. Trent Alexander-Arnold is one of the best footballers this country has ever seen and will ever see. He isn’t excellent. He is miles ahead of excellence. He is able to be Kevin De Bruyne and look after their best player at the same time.

Curtis Jones does a fabulous Gini Wijnaldum impression while carrying a load of threat. He looks after the ball marvellously. He is the business. The business is winning.

What grabs me about this Arsenal side is that I can make a case to sign any of them, but not one is as good as their Liverpool equivalent. Not one. These lads are the fourth or fifth or sixth or seventh best team in the country, but the gulf is staggering. They fancied this today and so did their crowd. But look at the gulf and gasp.

Liverpool own the gaff by the time the whole enterprise finishes. Diogo Jota has scored one of the great goals. This, this here is one of the great sides. This is our Liverpool. This is another clean sheet and Arsenal barely manage a shot. This is a joy to be alive. This is what being the business feels like.

This is it. These are the times. Enjoy.

“Liverpool grow and grow through it. The second is one of the great LFC goals under the circumstances…this is a side that is on the march, it’s a show of strength!”