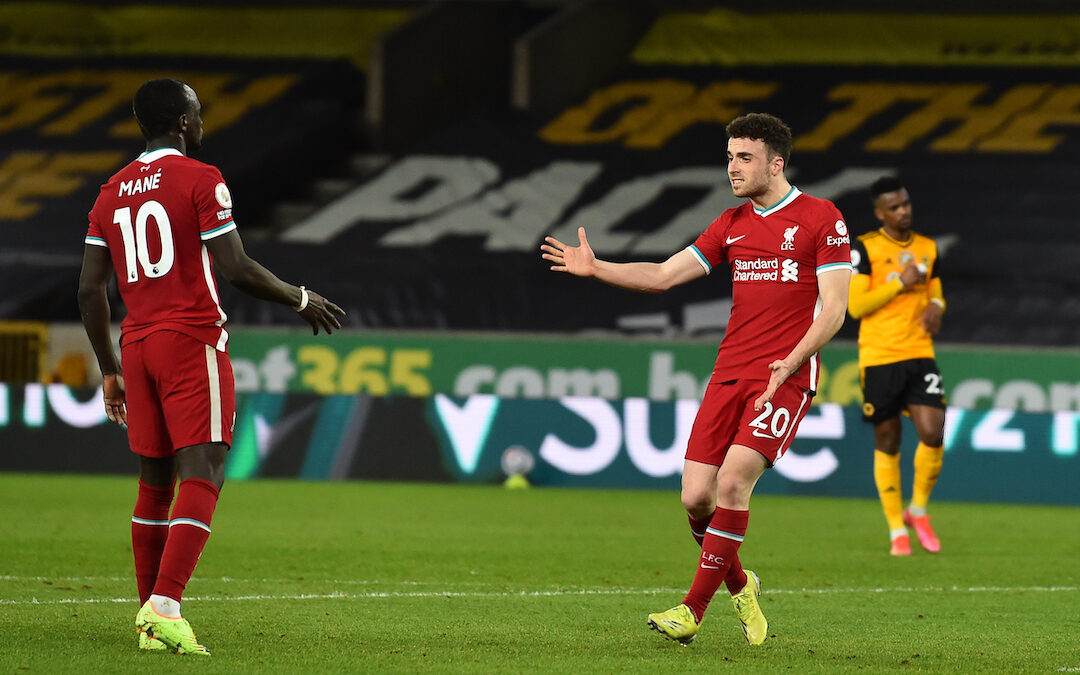 Josh Sexton’s preview ahead of Wolves v Liverpool at Molineux Stadium, with The Reds hoping to keep the momentum of this week going…

The city felt like it came alive on Wednesday night, as the party started in L4 and made its way towards the city centre.

The Reds were resplendent, gave us their absolute best, and it would’ve been rude for us to not give everything back in return. I wouldn’t be able to give it the big one like that every game, but then it’s not every day you beat your neighbours to the tune of four goals on their own patch.

And it’s only the start of December. The games and the celebrations will come thick and fast, and we all have to be prepared for that, but nobody more so than Jurgen Klopp and his lads. The sport science department will be working overtime to make sure we can field the best possible 11 as often as possible.

There aren’t usually free hits in the buildup to Christmas, but Liverpool’s brilliance has allowed them to buck that trend this season — and what better free hit than a trip to Milan and the San Siro on Tuesday? It’s a situation that gives Klopp and co breathing space, and gives him some moves to make for the trip to Wolverhampton.

So what are those moves then? The boss said there wouldn’t be “seven or eight changes” this weekend, which potentially hints at their being a couple of changes for this game, while giving himself the chance to rotate further for the final Champions League group game and keep his core lads fresh.

Of the core lads who will be asked to go again, Alisson Becker, Trent Alexander-Arnold, Virgil van Dijk and Andy Robertson will be the ones tasked with the defensive duties, and I expect Ibrahima Konate will get another chance to discover his identity as a Liverpool player.

With Joe Gomez back in training but ruled out of Saturday, I anticipate that Klopp will view next Tuesday as the chance to get minutes back in his legs alongside a more experienced and reliable partner in Joel Matip. Kostas Tsimikas will also likely be saved for that occasion.

In midfield, things are looking up for The Reds, with lads continuing to come back from injury. We’ve got the midfield three we all desired purring and, while we want to see them on the pitch together as often as possible, there’s a duty of care around making sure that is the case.

To my mind at least, Thiago Alcantara would be the player considered closest to the ‘red zone’ and could easily be replaced by the in-form Alex Oxlade-Chamberlain, who will be keen to cement his heightened role in the pecking order as others return.

Upfront I don’t anticipate any change, with all three firing on all cylinders and the chance to possibly rest at least two of them against Milan. The manager praised both Mo Salah and Diogo Jota in his press conference today, and this weekend Sadio Mane will feel like he’s got another chance to strut his stuff alongside those two.

Wolves will be a tough opponent as they always are, and the Saturday 3pm winter trip to the Midlands makes it feel fraught with a familiar sense of danger. However, these Reds have faced up to danger all season. They’ve looked familiar senses in the eye and told them in no uncertain terms where they can stick themselves.

They’ve travelled to Old Trafford, Goodison Park and across the country to take the piss out of their opponents. The Wolves will be ready to get amongst them but there’s few things these lads love more than that.

Get amongst us at your peril. ‘Cause when you come at the kings you best not miss.

“I’d expect a couple of changes against Wolves. Either way, it’s seemingly impossible to stop Liverpool scoring at the moment.”

🗣 @robbohuyton is joined by @RobGutmann to look ahead to Wolves…