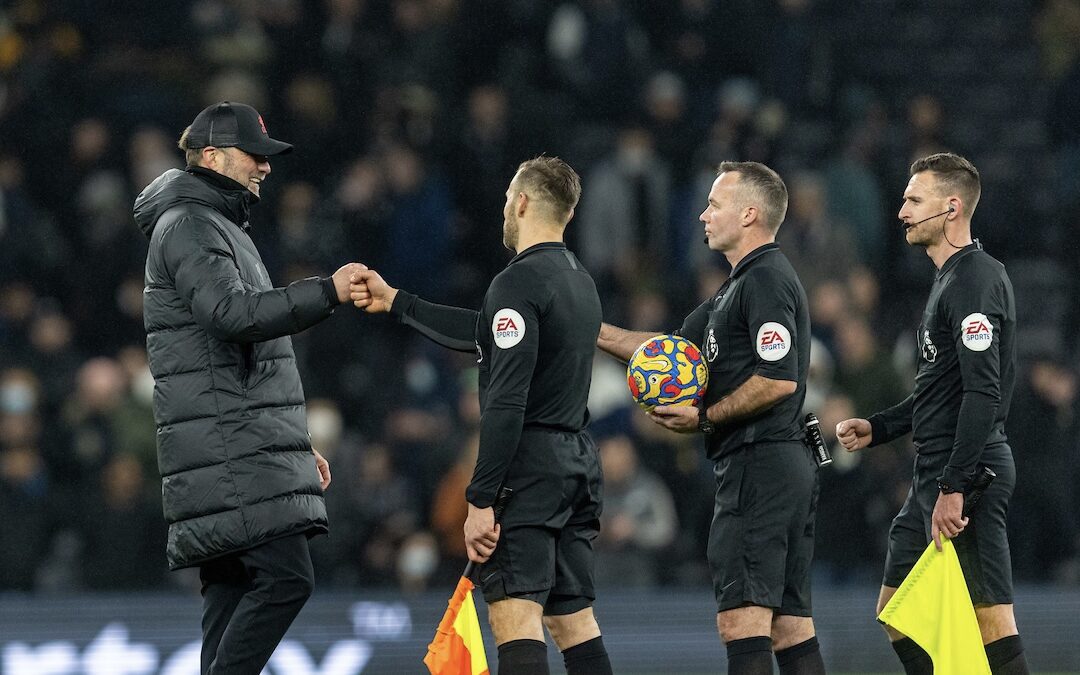 The way Liverpool play under Jurgen Klopp, what has brought them to the very big dance, is that they play with the smallest safety net you can imagine. I always felt the core feature of Gerard Houllier’s Liverpool was that it could deal with five or six players not playing well for stretches in games. It had a massive safety net; it was rarely a high wire act.

Rafa Benitez’s could deal with three or four having an off half an hour or even an off day. Brendan Rodgers’s football perhaps two or three. Jurgen Klopp’s Liverpool cannot carry passengers for any length of time. The system is too finely oiled, the gearing of the machinery too tightly calibrated to be able to tolerate even the smallest spec of dust.

Safety nets. The introduction of Video Assistant Refereeing in English football was all about allowing safety nets for referees as the games accelerated. There was too much riding on these games to allow them to go even slightly wrong. Therefore we need a backstop for when a decision, a significant decision is clearly and obviously wrong.

Last week – which feels an age ago – we mentioned Attwell refereeing dreadfully in the small spaces, in small doses. Ruining a game with a thousand cuts. But never a significant decision, just low-grade radioactive rubbish poisoning the game with every half-life passing.

Today Paul Tierney and his Video Assistant Referee act were absolutely dreadful, leaving the game hung, drawn and quartered in a frenzy.

(Let’s get this bit out of the way to get back to it: Liverpool deserved to drop points. And when the referee got his first big decision badly wrong Liverpool would have to accept it wasn’t unreasonable to be behind to Harry Kane’s finish.)

But Kane should be sent off. Not by a new fangled standard but by football as it has been for at least five or six years, if not longer. By the standard of football as you actually want to see it. He is forceful, out of control and nowhere near the ball and if Andy Robertson isn’t nimble the Kane challenge is a leg-breaker.

Tierney doesn’t see it as such and while I am limited in sympathy with him, this is where the referees in the hut are meant to spare his blushes. The idea that Tierney hasn’t missed something clear and obvious simply doesn’t stand up to either scrutiny or the later Andy Robertson incident. The referee has an excellent view of the latter but may not be able to see where Kane’s leg lands on the former.

On balance I believe both are red cards but only one passes the clear and obvious test and yet here we are, entirely the wrong way around.

In the intervening period the referee fails to give a perfectly obvious clumsy penalty, but that one doesn’t get the safety net employed either. Tierney spends 90 minutes falling onto his face over and over but it never matters to referees, not really. They get to bounce, they so rarely go splat.

Liverpool went splat. First half Liverpool went splat. Liverpool’s primary issue came from the middle of the park. What Tottenham did would have been their likely way home no matter what side Liverpool had available, but the midfield being both underplayed and, in the number six position, wholly inexperienced worked perfectly for Tottenham.

They won the ball back 20 yards from their own goal and then created huge uncertainty about 10 yards from the halfway line over and over to great effect. They didn’t try to simply, immediately, play two versus two with the Liverpool second halves. Instead they found a staging post to pull and push and then go at the heart of the Liverpool defence.

Other managers would have increased the safety net. Other managers may have asked a couple of his players to take fewer forward steps and more backward ones. Not Jurgen Klopp. Indeed, while Tyler Morton was struggling the core of his advice – and Liverpool’s second half response – was that Joel Matip and Ibrahima Konate needed to come and be even more aggressive, be even more front foot and flying into the Tottenham half to win it around Morton if need be.

The gearing of the finely oiled machine just wasn’t quite right for Liverpool and as they lost it time and again sloppily around the Tottenham area they offered more and more encouragement for a Spurs side desperate to believe.

Tottenham looked like what they haven’t since January 2019 in this league – a top four side. Liverpool could hurt them and could panic them but Spurs found a way to keep Liverpool just unable to calibrate. They found bits of variance and as they came under pressure Liverpool began to fray a bit at the edges.

It became a game where every footballer was so very involved, every player couldn’t be stopped from being in the action for both good and bad. Even Mo Salah, who was quiet as usual, distorted the way any opponent has to defend against his side. Both Liverpool full backs were incredible. There will be a shortage of adjectives for Trent Alexander-Arnold soon enough.

The goalkeeper was the best you’ve ever seen until he very emphatically wasn’t. Harry Winks was booked four times. Davidson Sanchez would kick it up in the air one second and sweep across the next.

The main way Liverpool missed Virgil van Dijk was for his aura of calm but they missed Fabinho, Jordan Henderson and Thiago Alcantara for what they would have brought continually to the pinwheeling mechanism spluttering around and splatting onto the pitch.

It was a televised game, like West Ham United, like Brentford where Liverpool have again been glorious for the neutral and absolutely agonising for the committed. The lack of a safety net leaves your heart pounding in your chest. Great, compelling drama for the Sky cameras, dreadfully narrated by Martin Tyler. Brilliance and dreadfulness everywhere you looked. No safety net.

Both sets of players will sleep well tonight. Both sets gave absolutely everything to the contest.

It is two dropped. Because the pace is what the pace is. Can they be recovered? Absolutely. But in every single way, in the split second of the shape, in the 90 minutes of the contest, and in the 38-game season up against Manchester City, Liverpool exist without a safety net.

It is the right to be and the only way we win but my god there are days, when embroiled in the trauma of watching it, you feel like your heart could just explode.