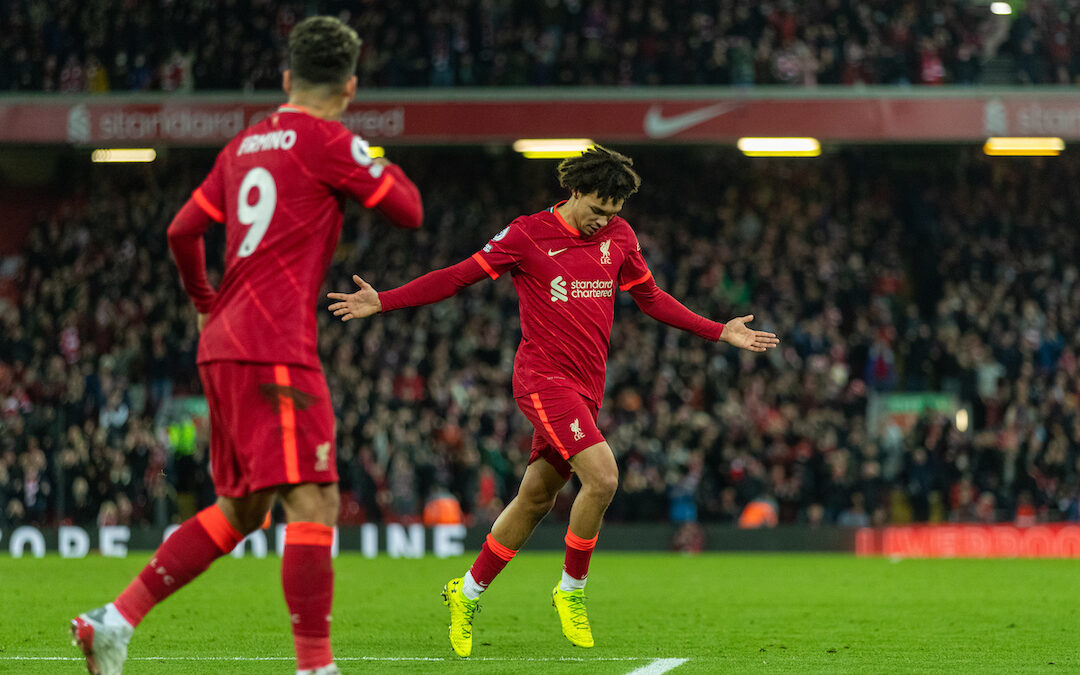 Neil Atkinson’s post-match review after Liverpool 3 Newcastle United 1 in the Premier League at Anfield, and it was unconventional…

Jonjo Shelvey’s early goal roars into the Anfield Road goal and travelling Geordies live up to their reputation and go absolutely wild. Black and white shirts fly in the air.

In parts, Newcastle charge forward all convincing, Saint-Maximin so dangerous and brilliant. In parts they are all over the show resorting to the trials and tribulations teams revert to when out-classed by a fleet-of-foot and quick thinking Liverpool. But…

It’s a refrain for decades. You want the match to no longer be any of their business. We all love a contest unless it involves us. Then we hate a contest. We want a cakewalk.

In years gone by, decades gone by, that would be more of a second half refrain. But these days it is what you want from the second Mo Salah makes it 2-1. Make this contest stop now.

There’s an inherent problem here — we act like this is a choice. Kill the game, Liverpool. Not killing it is like a recalcitrant teenager not tidying his room. If he really wanted to, the room would be tidy. Why isn’t this game dead?

Reasons: it was a game with oddities. Thiago Alcantara, first half especially, was downright dreadful. At half time I saw John Gibbons and he told a story where his dad delighted in telling him that once or twice a season Kenny would throw in a performance that was so bad it would be astounding. It would take your breath away. John said he looked forward to telling grandchildren about Thiago’s first half. There was once a footballer so good it was incredible, but every now and again he could be horrid.

The fact is that Jonjo Shelvey, not for the first time, and trust me, not for the last, managed to do both ends of that incredible to horrid spectrum in the same half. This is so common it is almost not worth writing about. But my god, what a genuinely remarkable player. He is capable of everything and anything. He’s a roulette wheel constantly spinning in the middle of the park. He scores a 25 yarder and makes Liverpool’s goal to make it 2-1.

Reasons: It’s a funny Liverpool side. Virgil van Dijk is covided out so our defence just feels weird. Konate and Matip are no one’s idea of a first-choice pairing, but they do well. Matip takes the lead, and Konate looks excellent. This bodes well. And at the other end of the park, Diogo Jota shows yet again why he more than deserves his place in this team. But it isn’t quite the Liverpool team. There are angles that shouldn’t be there. Everything is just out, like a jaw that won’t stop clicking.

Reasons: Their goalie plays excellently too and keeps the score is lower than it might have been. Liverpool are on top in this game, be in no doubt. But it is not so conclusive as to be easy, and the Newcastle players fight for possession that they are in the end, and for the most part, denied.

But why isn’t this game dead? Reasons: Liverpool are just a tiny bit off it. They are first to almost everything, but that isn’t the same as fluency. I’ve observed it before, but today Jordan Henderson was simultaneously Liverpool’s best midfielder but hamstrung by something Fabinho often isn’t: the presence of Jordan Henderson just there at 2 O’Clock. It isn’t that Alex Oxlade-Chamberlain performed badly. He was tidy enough. But this Newcastle side would be best killed with the sort of doubt Henderson in that position creates constantly. They can defend instinctively. It is when you engage their brain they struggle.

Reasons: They were stout. There is a reason why 1-0 is better than 2-1. Because 1-0 offers hope. You can score. You can get something. Just stay alive. Just hang in. The two best teams in the country are Liverpool and Manchester City. The former keep their own hopes alive remarkably well. The latter douse the hopes of their opponents remarkably well. Each is quite good at the alternative, being fair, but there is this teeny bit of a core difference which, over the course of a campaign, may well bear fruit in different ways.

Still, tonight, for Liverpool, what was easiest on the eyes was a thunderbolt from Trent Alexander-Arnold which did indeed kill the game and seal the points. It was one where the shot became his best option and then he committed so very wholeheartedly. His earlier intervention had been as key, a challenge which diverted the ball brilliantly.

His performance in these key moments is a reminder that Liverpool’s brilliance comes from all angles. In hindsight he probably is man of the match, but it felt like for a period of time Jordan Henderson was a one man midfield and that Newcastle had decided their way home was Ibrahima Konate, only to discover that wasn’t a way home but a slab of concrete wall.

Sadio Mane blistered early but faded. Diogo Jota scored one but could have had three. Mo Salah is the best player in the world.

Kill the game, Liverpool. Get it done and then we can relax. But…

It doesn’t always work like that. It’s sport and so it can be a teeny bit ugly. Graft works that way.

It’s another hurdle overcome. An easier one? You bet. But they all need jumping. On to Sunday. This league isn’t going to win itself. We know that by now.

We’re going to win it. And we’re going to win it by winning on the good days, on the bad days and on the days in between. Jurgen Klopp’s Liverpool this season will find a way and they will kill games when they are good and ready.

These are our boys and you’ll tell your grandchildren that Thiago Alcantara could throw one in on the way to a title, gorgeous.

“It’s a measure of our squad depth when you can make so many changes and look so strong.”

“I’m excited to see Bobby back!”