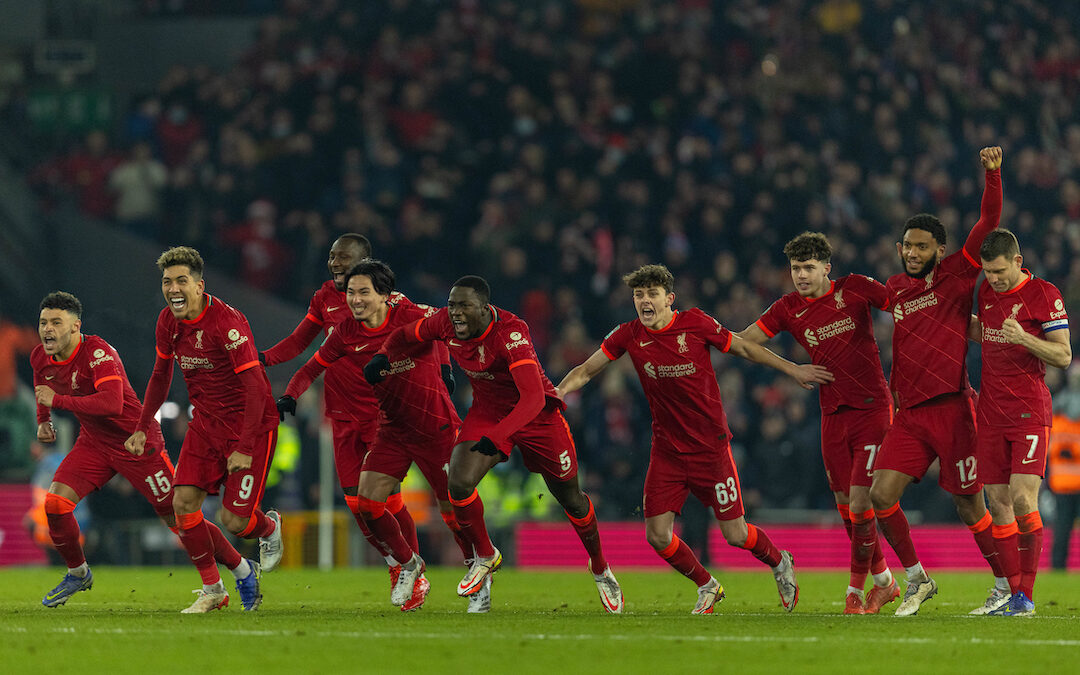 Today me and Adam Melia texted one another. “The Worst Timed Game In History,” he said and I concurred. Said I’m going to use that, you know.

I mentioned Adam in something I wrote for Ruth And Martin’s Album Club about LCD Soundsystem’s album Sound Of Silver. It’s gone now but in it I asked this question: Have you had the best night out of your life? Has it already happened? Is it to come?

Today, as the worst timed game in history unfolded it managed to shift gears from “absolute chore” to “most fun you have had in this ground since Shrewsbury” in the blink of an eye.

And it makes this observation fair: “You can never know if you have had the best night out of your life while Jurgen Klopp is at Anfield doing the business.”

It’s been hard. I know it has. The time of year is always more of a slog than we care to admit. The additional burdens and uncertainties haven’t helped. The fact we all despise these fuckers in power, taking power, holding power, abusing power has been a kick in the face over and over.

It’s been hard and obviously I have just wanted to hold you and tell you that, and that in itself is hard.

But The Reds. Honestly, The Reds.

Tonight is the sweetest kiss on the forehead. It’s the hand on the arm, the glint in the eye, the shake of the hips, the bite of the lips.

Tonight is reminding you of the people you had the adventure with. Tonight is the invitation to adventures to come.

The worst timed game in history, the League Cup quarter final with Christmas on the horizon, with a to-do list long as your arm, with a pandemic banging on, becomes a reminder of all that is good about this thing of ours. The ghost of big games past, big games present and big games yet to come.

They just delight you.

The football. Leicester pick a strong team. They pick a Jamie Vardy team and Vardy has a ball around Billy Koumetio, Liverpool keep giving it away cheaply and suffer. We are carrying too many vulnerabilities. The whole right side can’t cope and the stress test is too much.

But Roberto Firmino and Alex Oxlade-Chamberlain are not to be cowed and both remain bright and link up well. When Liverpool grab that one back you just begin to wonder.

The James Maddison drive though takes wind out of sails. Just stay in it, Reds. It is hard to work out when the shift happens but their end helps matters. So deeply, needlessly obnoxious you went from being interested to wanting to needing.

(Feed The Scousers, by the way? We feast tonight on your broken dreams you absolute frigging ghouls. Enjoy the trip back to Leicester where the streets are paved with gold.)

For the first and third the keeper should do better. But redemption comes after the fall as we all know. You can’t have one without the other.

Liverpool’s subs repeatedly change everything. Leicester’s subs do the same. They weaken as we strengthen but weirdly, unexpected during the worst timed game in history, we need more than want and want for all time. We want the story. We want another yarn. We crave the anecdote. The lesson. The adventure.

I have Heaton just there, and Gutmann just there, and we would give literal body organs to win this game, you know, because of loads of good reasons and also a dollop of fuck everybody, and now Leicester are neither here nor there, and my god have you seen six thousand people bottle it at once?

Footballing miracles, on a weekly basis, and they want to eat you alive. All the best.

Heaton says “this is 2-3 on 90 and they’ll go” and there it is. After Ibrahima Konate is certain and Joe Gomez is solid. After James Milner bristles and Naby Keita struts. Suddenly, again suddenly, the ball drops to Takumi Minamino and he is resplendent. He is unerring. He is one of ours.

He almost lets us down later. But what is the redemption without the fall? And what is being part of this team if someone doesn’t dig you out? The beauty of this Liverpool, our Liverpool, the Liverpool that truly matters, the one that gets you out of bed is that no one ever truly is left alone. The prettiest green eyes.

Jota digs him out. The lad from Cork gets his glorious moment. The boys stand up over and over. The worst timed game in history becomes a Christmas carol and I miss you, I always did, I always will.

The next round comes and a thing dings in my head. Quadruple. It dings and it disappears, something to park for now. Something to not think again, at least not for a while. But the best night out in the world? Always, with these characters, I wouldn’t rule anything out.

And if I’m sued into submission,
I can still come home to this…

They’ll be here, this Liverpool side. Reminding us of the past, promising us a future. I told you I love a yarn. Always an adventure.

We’re in the midst of an awfully big one.

“That was absolutely fantastic. Every element of that second half! One of the greatest things about Anfield is when there’s a second half siege. We were flying in and their heads had gone.”