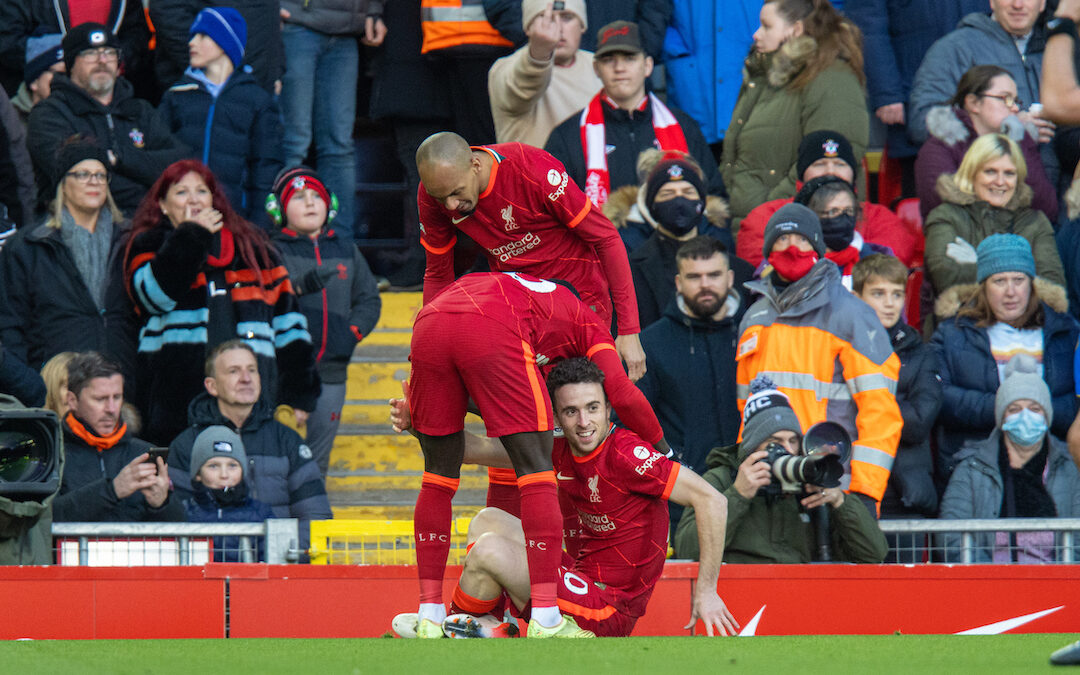 John Gibbons’ player ratings after Liverpool 4 Arsenal 0 in the Premier League at Anfield, as Alisson Becker stood out despite the big win…

I tell you what, I wouldn’t want to be playing Liverpool next.

Mad giving a goalie a 10 in a 4-0 win, but it’s not my fault he’s fucking brilliant. Deals with one on ones like he’s just taking the bins out or something. No fuss, bangs his gloves together, puts Corrie on.

Slightly quieter game from the greatest full back in the world, but still does a couple of things that take your breath away. Delivers more often than the Just Eat fella to ours the day after Arsenal.

Much more like it today. Was great for the opening goal and his celebration was even better. Crosses so inviting I’m going for a pint with five of them next week.

A mixed bag, if we are honest. Still finding his way and some of his positioning is wild. But you can see what they see in him and he’s still very young. When I was his age I was still taking my washing to my mums. I have a theory he doesn’t know how big he is yet. But if I asked him he’d probably say “nah fucking massive me, lad”. So don’t hold me to that.

I’m sure he could play upfront for most teams, you know. A finish so emphatic it refused to be saved. Like the keeper saved it and the ball just went in anyway. Unlucky lad.

Didn’t do anything flash tonight, but is purring like the engine of a classic car.

Only did 60 but still showed more than some midfielders manage in a season. That roll under his boot for the first goal was the best roll since Sadio got fouled in the first half and rolled to Goodison Park.

The most attacking of the three and linked great with both Mo Salah and Trent. Perfect ball to Salah for Jota’s second. Was fuming when he got took off. Maybe because it was freezing and he didn’t want to sit down. Then Jurgen gave him a big hug and whispered in his ear “don’t worry we’ve got those massive jackets” and it was fine.

If he’s saving his goals for Wednesday I’m completely fine with it. Even on a quiet day he comes out with an assist, although he probably should have had another right at the end of the first half. Think half the ground thought he’d scored the first, like!

With the greatest of respects, what on earth was he doing dicking about in Wolverhampton? Maybe he’s bang into Slade. Fair play if so, don’t get distracted by the Christmas nonsense, they’ve got some absolute rammers.

Shame that header didn’t count because it was even better than the Arsenal one. I love how we’ve got the quickest, most skilful lads in the world and they all still head it like Les Ferdinand. Maybe saving his goals for Goodison too. Has he got one there??? Can’t remember…

Unlucky not to start really, so great for him he gets 30 minutes. He’ll be very much needed in the next month or so.

Much less fun than his cameo on Wednesday that just seemed to be “have a row”. Sort of want him to stay forever, but that’s probably unrealistic so I’ll settle for a 10-year deal.

Always nice to see him, isn’t it?

“It’s getting to a point now that we are so superior, we are so dominant that I’m getting annoyed when Alisson has to do something. Southampton didn’t know what hit them today!”