How Liverpool’s Winning Mentality Shone Through At Old Trafford 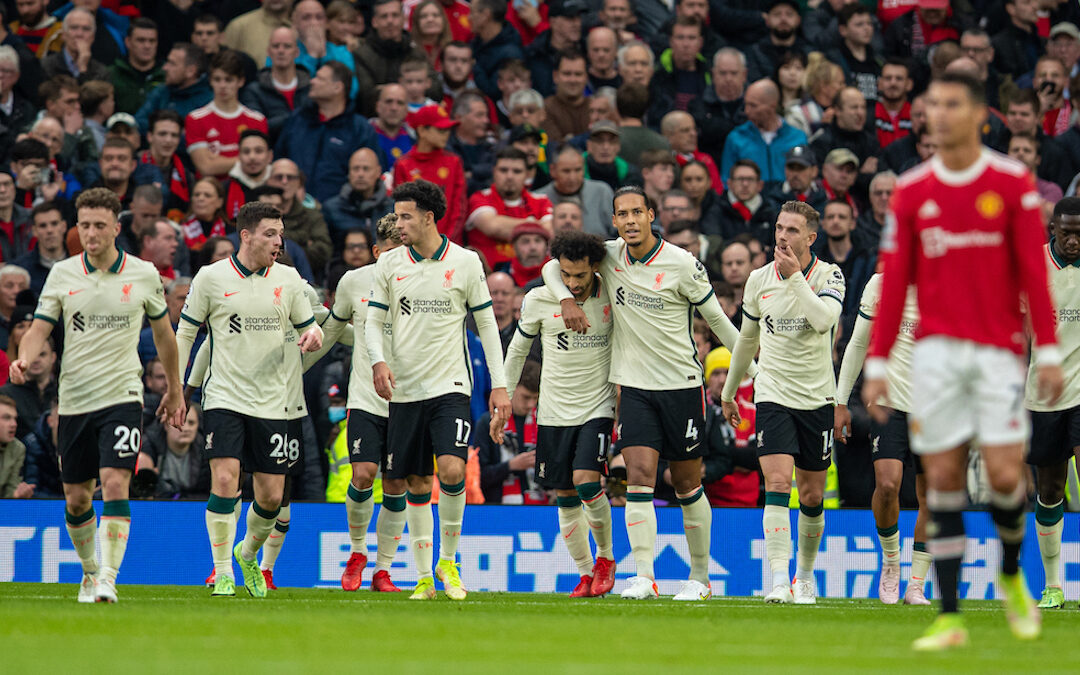 WE’RE all still watching the highlights from Sunday on repeat, aren’t we?

Most weeks by the time it gets to Wednesday the weekend game feels like it has been and gone, straight on to the next.

It goes without saying it feels a bit different this time.

I don’t think we’ll ever forget that one. To be honest, I wouldn’t judge if you’d stopped reading this by now and went and watched the full 90 all over again.

Frankly, things like this don’t happen every day, but they happen to us more than most football clubs admittedly. Aren’t we lucky?

“Liverpool hell bent on giving Manchester United nothing.” I don’t watch Match of the Day all that often, but that sentence epitomised the game for me on Sunday. We didn’t want to give them an inch, a goalscoring opportunity, a second too long on the ball, or any possession whatsoever.

Mo Salah followed up the next day by acknowledging “with this team, winning should always be the only option”. There were so many moments during the match where you get to witness Liverpool’s winning mentality in action.

With this team, winning should always be the only option. pic.twitter.com/J8QDh8bWZh

James Milner feeling his hamstring becoming tight but putting the team first and sprinting to catch up with Greenwood.

Andy Robertson screaming “keep going, keep going, be ruthless” when Salah had just scored in his 10th consecutive game. The same player fuming at himself when he missed a chance having already scored a hat trick.

Ibrahima Konate coming in for such a big occasion and trusting that he’s good enough to deal with Ronaldo on just his second Premier League appearance for The Reds. It’s not an easy defence to slot in to, so what a statement of trust in a young player who is still adjusting to our system.

The sheer determination to not concede a goal to the extent that when one did go in, it was like they had just gone 1-0 down rather than 5-1. I could go on for a while, but you get where I’m going with this.

There is one player, though, who I sense epitomises our winning mentality when we need it the most, week in week out: Bobby Firmino. The most-used player in Klopp’s managerial career isn’t always the one making headlines, but my god he deserves it.

It’s probably strange to write about a player that didn’t score in a game where Liverpool netted five, but Sunday exemplified just how good he is at playing the false nine role.

The manager couldn’t stop talking about how impressive he was post match, in particular praising the defensive side of Firmino’s game, noting he is the best offensive defender he’s ever seen.

🗣️”He’s a connector – the best offensive defender I ever saw in my life.”

He chased the ball relentlessly, won it back in dangerous areas, and caused the opposition to panic countless times as he made it practically impossible for them to play out from the back.

He’s also utterly selfless, a possibly underrated but necessary trait in this team, and he more often than not makes the second to last ball to create goals.

For the first, he quickly turned to play Salah in who fed the ball to Keita and we know what happens next. Things that they practice in training every day look like a pure work of art when they happen on the pitch in front of our eyes.

His build-up play for the third goal is absolutely phenomenal again. Pass and move in motion, as he instinctively knows the space players around him will move into.

With his quick decision making, Firmino manages to let everyone around him look good, often at the expense of being the shining star himself. That’s what happens when you have a winning mentality.

“Everybody loves Bobby, there is no doubt about it. People will write books about the way he interpreted the false nine position.”

It’s hard to disagree with the manager. Whoever ends up writing the book let me know, because I want to be one of the first to read it.

“Liverpool are showing live over the course of 3 or 4 weeks that we’re learning, that we’re getting back into gear.”

“Having watched what we’ve watched over the years, we get to truly appreciate this team.”