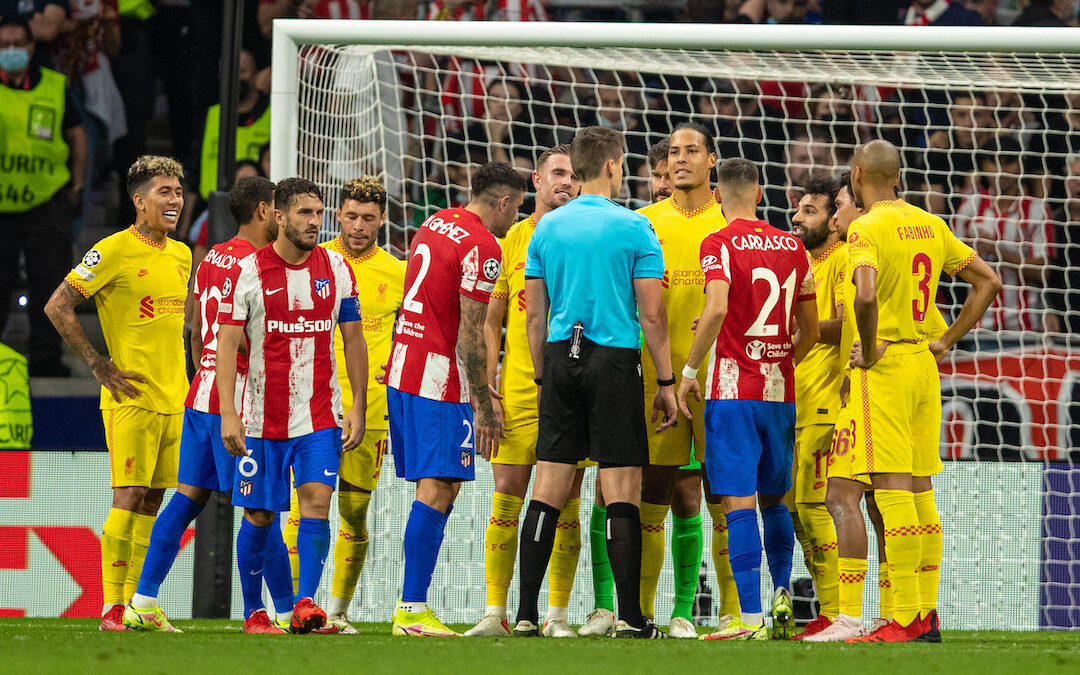 I LOVE the needle.

I love the needle. Not because it is a negative force but because I believe it can be a positive one. Needly gets results. I’m frankly in love with Craig Hannan because he is one needly bastard, because he uses the needle to make lives better; wants people to understand and love what we do. Because he grafts.

It was an incredible game tonight between two brilliant sides. These are amongst the best in the world, from front to back. These are the best players with the best coaches. And they graft.

There were long stretches tonight where Liverpool came up against a serious, excellent and nasty football team. But they then found their way, they looked after their moments even when Atleti broke through too easily.

The side Liverpool were facing took their epic quantity of needle and used it pessimistically. They used it the wrong way. They scratched and shook and never quite found their balance. They had the energy you need but without the focus. They chose the needle but found the pessimism. They weren’t good enough, not really, and they have been good enough an awful lot.

Fascinatingly Atletico targeted Robertson, hit Liverpool’s left flank over and over in a way most sides don’t. They responded brilliantly going down to 2-0, aided by a kind refereeing call. They found and employed a smart deep runner option against Liverpool’s line, something Liverpool didn’t come to terms with until the final half hour.

Atletico Madrid were good, but never quite capable of any final step, never quite where they needed to be. Their crowd was vocal and strong. De Paul was excellent, Koke the business. But they had committed to too much needle; they were an attacker light because they wanted to stop Liverpool.

For The Reds, Jordan Henderson put in his best performance of the season in all phases. He was excellent as both six and eight. Liverpool in the long term may be better with one or the other, but tonight got both.

That said, from 20 to 60 the best player on the pitch was Alisson Becker. He was incredible. He also conceded two, a reminder that while perfection can never be possible, near perfection is a live thing. Liverpool owe him the points.

Mo Salah grabs a brace and Atletico got dragged down into an argument away from that they were losing with the goalkeeper. The Video Assistant Referee worked in Liverpool’s favour but mostly because it was right and because sometimes the needle can blind us from what is in front of our faces.

I admire and love the idea of victory being based upon needle. But it has to be just one tool in your armoury. Tonight
Liverpool called upon it perfectly. Understood it fully, they knew the ropes and played every hand marvellously. But they had more than just the needle. They had the purpose you need.

It, they, Mo Salah and Alisson Becker, Jordan Henderson and James Milner, have needled their way into the verge of the knockouts after only three games. They gave no quarter. They were harder than you or I, and they dealt marvellously with adversity.

There is nothing more needly than winning. Nothing quite like that handshake which explains why Diego Simeone ran down the tunnel. Why he ran away. But he was wrong on so many levels. Look them in the eye. Smile. Nod. Come back from adversity. Come back from third and the quarter finalists of the Champions League. Come back knowing you have everyone’s details.

I love the needle. You’ve no idea. But you need that bit more. It has to be about something. Tonight Liverpool were something.

That is never going to stop.