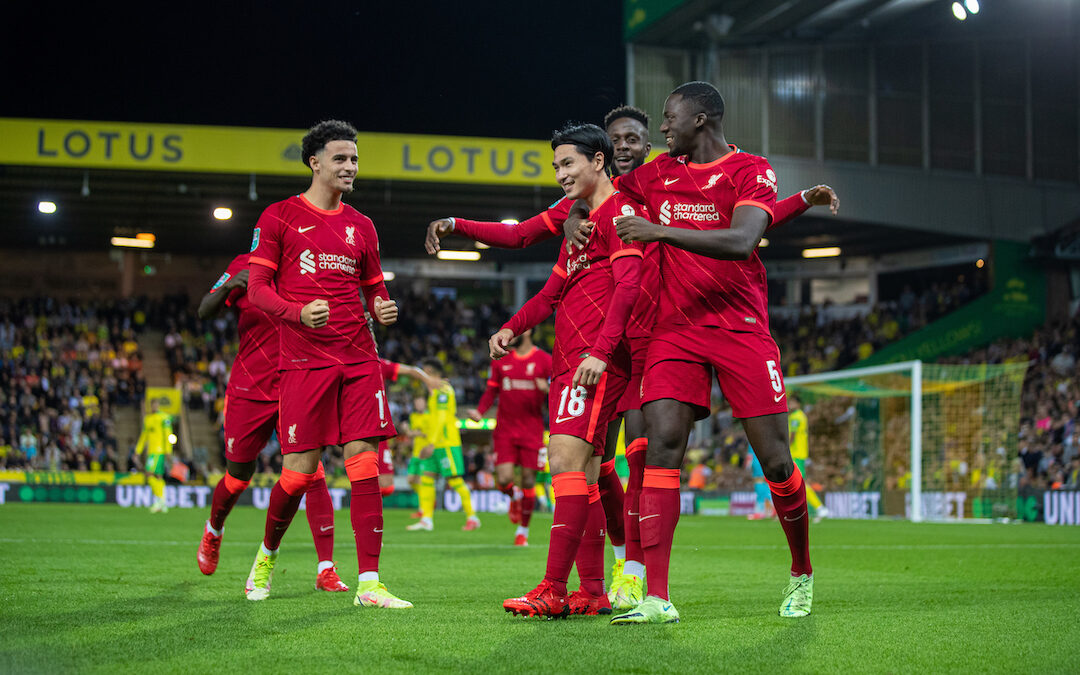 Neil Atkinson’s post-match review after Norwich City 0 Liverpool 3 in the League Cup at Carrow Road, as we’re reminded they’re all our lads…

IT couldn’t have gone much better for Liverpool this evening at Norwich City.

There is something about League Cup football which is reminiscent of other sport. It doesn’t have to matter unless you decide it matters. It matters the world to the participants but for us, well we get to choose.

But, because this evening it matters the world to the participants and because they are our lads, you get drawn in.

They are our lads. For too long we have been too guilty of thinking of some of them as our assets, as chips. Mel Reddy was as ever well argued and vital at the weekend. Look inward, look at our output for one. We don’t need to seek out people to mock here but to reflect with honesty and integrity on things we have said, written and thought.

We want to turn the lads into cash, create the squad spaces. But these are humans with lives and ambitions. But also with room to grow and improve.

The manager gets to have wanted to sell Divock Origi or Taki Minamino or any of his side but he also then gets to work with them, gets to want the best of them, gets to be rewarded. Origi makes an amount of sense for Liverpool in flashes as a number nine. He also gets to get better, to play better, to work with his coaches. He gets to grow. We shouldn’t take that away from him, from any of them. We don’t have the right.

Minamino is a gifted footballer, marvellous finisher but is rather unorthodox in his movement. He finds pockets that are rather un-Liverpool and therefore are ignored.

But both can have a significant role to play for Liverpool this season. They are our fifth and sixth best forwards, our 21st and 22nd best players perhaps and we could do a hell of a lot worse. In almost all seasons before this one we very much have.

We have a lot to like tonight. Bradley and Kelleher aren’t great for the penalty incident but both makes amends; Kelleher immediately.

Curtis Jones does a neat and intriguing Fabinho impersonation. Kaide Gordon is a Champions League class footballer in waiting. Kostas Tsimikas’s delivery is golden. You’d like a teeny bit more from Naby Keita and Alex Oxlade-Chamberlain but the latter rallies second half and is dynamic. The former gets a rest.

He was replaced by Tyler Morton and suddenly it looks like there is a universe where he could be something live for The Reds. He is the most pleasing surprise of the evening.

The man of the match though is no one mentioned thus far. Joe Gomez captains Liverpool and leads Liverpool and there is no end to what he is alive to. He is brilliant after the penalty. Goal-saving in the most direct way but his whole performance is absolute class.

He’s one of the best five centre backs in the country and he shows why this evening. Cumulatively the players around him and behind him have fewer than 25 appearances for Liverpool. They all deserve the clean sheet, don’t get me wrong, but Gomez deserves to have it framed. Another Liverpudlian leader in a squad full of them.

It was lovely tonight, really it was. There has been odd amounts of cant about in a number of ways, but I struggle to remember a more likeable Liverpool squad than this. They all have adventures and arcs which add to the whole.

It remains a competition I’d be surprised to see Liverpool contest the latter stages of, but if they did I’d love the addition to the journey. We get to simply like this along with loving it, along with being compelled by this, along with every thing being needed more than wanted and wanted for all time.

They are our boys. All of them. That’s the rule, that’s the covenant. We can all, me included, remember that more often.

“A great win for the reds.”

“There were some brilliant performances from the youngsters.”