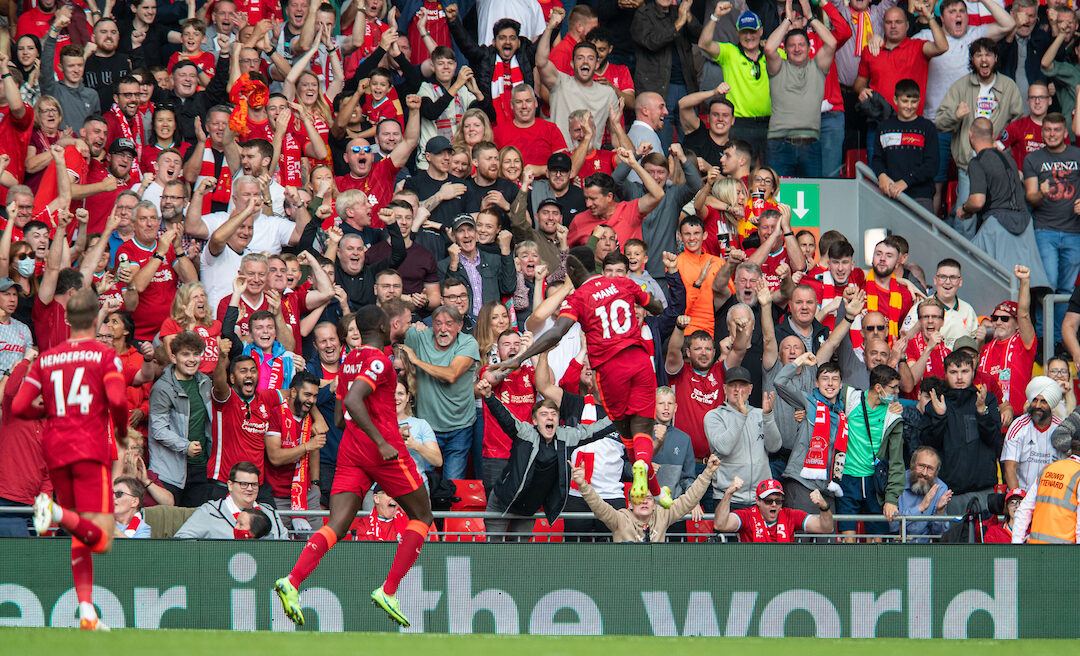 Neil Atkinson’s post-match review after Liverpool 3 Crystal Palace 0 in the Premier League at Anfield, to round off a huge week for The Reds…

THERE are weeks and there are weeks.

Leeds away Sunday, Milan home Wednesday and Palace home Saturday is quite the week. It’s not a monolith, not a behemoth, not an epic but it’s not a shrug of the shoulders. It’s a job of work.

And bar 10 minutes against AC Milan it couldn’t have gone much better for Liverpool.

They look ready. Maybe I’ll be wrong, maybe these words will haunt me and us, maybe they’ll have bad luck and hard lines and begin to find it tough but at the minute they look ready for serious business.

This isn’t the same as being perfect or being invulnerable. Today Crystal Palace attack them very well in bursts across the 90 minutes and are both unfortunate and denied by brilliance in not troubling the scoreboard.

This Liverpool side is built from the back; it’s a series of end of level bosses. You get beyond Jordan Henderson and Thiago Alcantara, there is Fabinho. You pick your way around him and there is Virgil van Dijk and if you’ve been really good and really lucky you then, in whatever nick you end up in, have Alisson Becker.

He’s enormous and looks bigger. He stands up for days. He is calmness personified because he has seen frisky young bucks like you before. He has a glint in his eye and must be distractingly handsome. He is the rock everything can founder on. And he is back to being himself.

James Milner had a game where he was all about being there first and being there hard. He allowed Wilfried Zaha nothing for free and Zaha got himself wound up. The rest of his side looked excellent including Michael Olise who came on and looked ace. Milner and Henderson though. Nothing for free.

At the other end Sadio Mane was excellent and enjoyed the scrap and it was Diogo Jota’s day for the naughty step in front of goal. The reality is that it will always be somebody’s day for that because if it isn’t Liverpool will score eight. The chances just never stop coming. Liverpool are attacking so very well. One day it will get harder as we saw against Chelsea and then digging one out will be the order of the day. But not today.

Mohamed Salah is the best attacker in the league. This summer some lads moved around and to this division. A lot of money in wages and fees has changed hands. But none of them are Mo Salah. As it stands the only attackers in the world worthy of being mentioned in the same breath spend every other Saturday in Paris or Munich. He is this league’s dominant attacking force and he has started this season with aplomb.

He loves it. More than ever at the minute he evokes a pulsating sensation that he is a Liverpool player. A Liverpool leader. He has seemed like a lot of things. In February 2018 he escalated to global proportions, shot past our eyes and my god did we enjoy the vapour trail. But right now his greatness is our greatness.

His ambitions are unequivocally ours. Him imposing himself game by game, month by month on this division is us imposing ourselves. He and us have never ever been closer, and let’s be clear we have been pretty close. Watch him give it the big one topless. Echoes of Gerrard at Fulham. It was a siren. Sound the alarm, there’s a league to be won.

I have a story I tell that I love. When it all went mad against Paris Saint-Germain and Chelsea and more in the autumn of 2018, when night outs begat nights out all of a sudden, Brock said to me and Ben Jono “lads, you need to pace yourself. It’s only September. Imagine where you will be in November.”

It’s only September. But September means that April can be a thing. September feeling like April is an aspect of a club, a set of players and a supporter base being in unison. We need it more than want it and we want it for all time. Close your eyes and tell me what you see.

There are weeks and there are weeks. Sound the alarm. Fireworks blazing. Heart isn’t breaking. Nothing for free.

“You’re watching a side that can compete on two fronts, they can be brilliant in the week against Milan and then beat Palace at the weekend.”