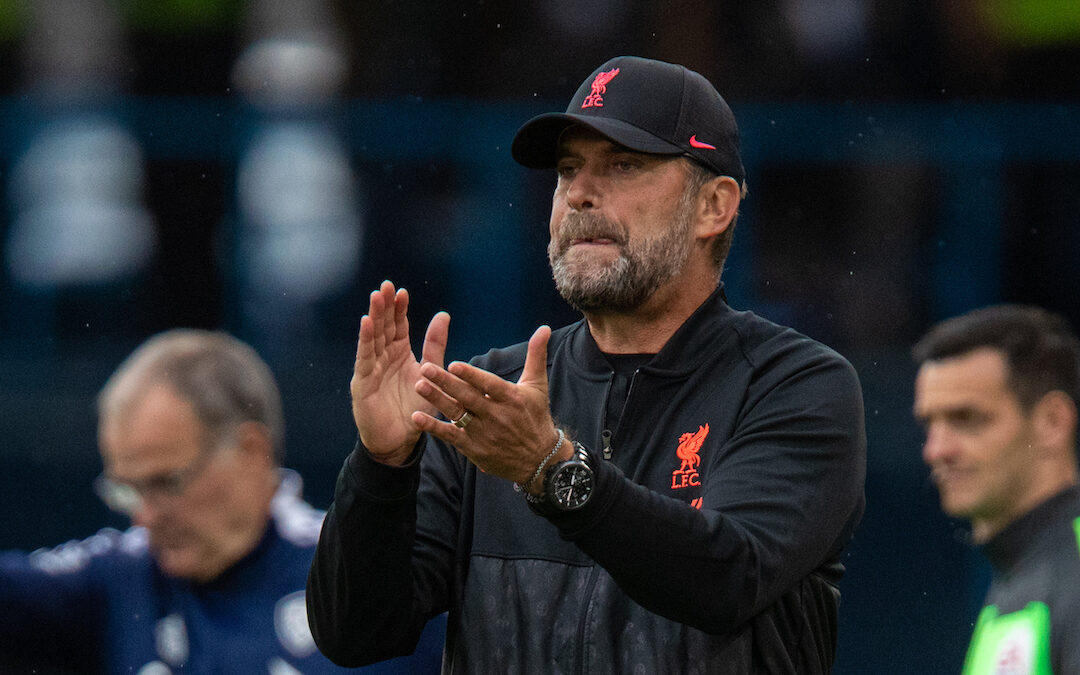 Neil Atkinson’s post-match review after Leeds United 0 Liverpool 3 in the Premier League at Elland Road, a win dampened by injury and more…

THERE is an alternative universe where Liverpool make the sub they were going to make and Elliott walks off and this piece of writing is solely about The Reds sauntering to a 0-4 away from home.

Sadly this is not that universe. In this universe we need to talk about two things that stem from one moment before we talk about The Reds being excellent.

The Elliott injury is such a blow. He wasn’t playing brilliantly, far from it. But clearly he has had a lot to offer Liverpool both this season and in the future. The reaction of Liverpool’s players, especially Mo Salah, made it clear that as an injury it looked horrible in real time.

Everyone reacts quickly which could prove useful. It, in conjunction with the red card, took all the steam out of the game, which couldn’t be said for the terraces. The injury allowed some choruses around Elliott having broken his leg to be belted out from their end.

If people are comfortable singing that, that is down to them. I think it is despicable but firstly I am sure we have our own toerags, and we should never forget this, and secondly there is a sense where it is within the game.

This brings us onto our second thing. What isn’t in the game, what shouldn’t be in the game is singing ‘Always the victims, it’s never your fault’. That’s a Hillsborough song. There shouldn’t be a debate.

What doesn’t help is going back years some irresponsible publications and writers mainstreamed the sentiment.

Nine years ago today an independent panel commissioned by the government published a report around Hillsborough which made clear – yet again – as a matter of record that Liverpool supporters present that day were the victims. It wasn’t their fault.

A distance away down the front an older Liverpool supporter ended in an altercation in reaction as that chant rang out.

To be clear. We have only recently seen another family grieve through the loss of their loved one, and a coroner confirm he was unlawfully killed. If you are reading this and you really don’t get it, imagine a close member of your family living through the crush on April 15, 1989. Never mind dying, just imagine living through that. Imagine how angry you would be. How distressed.

Now imagine years later football fans aggressively chant that at you. Do you get it yet? It is abuse. Abuse of people who have been through enough. And it needs to stop now.

I’d wonder about an apology, a public acknowledgement, any bit of class from Leeds United’s hierarchy but I wouldn’t hold my breath.

Onto the game then…

Liverpool battered Leeds United. When they made it one they were well worth it. When we hit half time it should have been three. Fabinho makes it two, Liverpool were on top, then the injury hits.

Across the course of the game Sadio Mane should score a hat trick. This isn’t a soft should score. It’s a serious one but then he finally gets the goal, one where Liverpool did everything they could to put it on a plate for him and the relief is palpable.

Fabinho was magnificent. To think it was possible he wouldn’t have graced this fixture. He was the game’s defining force, everything stemmed from him. It was the business.

Second to him were Joel Matip and Thiago Alcantara. Matip loved the whole thing, managed to play centre half with exuberance. He is a marvel. We probably have to do without him on Wednesday to ensure we can have as much as possible.

It was another game Alcantara grew into. It’s a strange phenomenon. He goes from ornamental to integral to essential. He forces the game into his image.

Leeds did struggle. They grafted, the struggle was visual, but they never got close to their task. They never got to the bottom of what to do about Mo Salah, until Mo himself got his head wrecked by the injury for 10 minutes.

The truth is that this is a banana skin on paper and maybe it will catch someone out in reality. But simultaneously, today, the day where the four best teams in the country are all occupying those top four positions, that doesn’t feel likely.

The challenge is real and present every week. Every game other than those between that four are must wins for each. There’s 38 hurdles – four done, 34 to go.

Liverpool today tamed Elland Road. They bent it to their will. This is being on the march.

“The reds deserve credit for how they managed to regroup.”

“I’m made up they got that third goal because I wanted to celebrate another but also because it’s the right reflection of the game.”