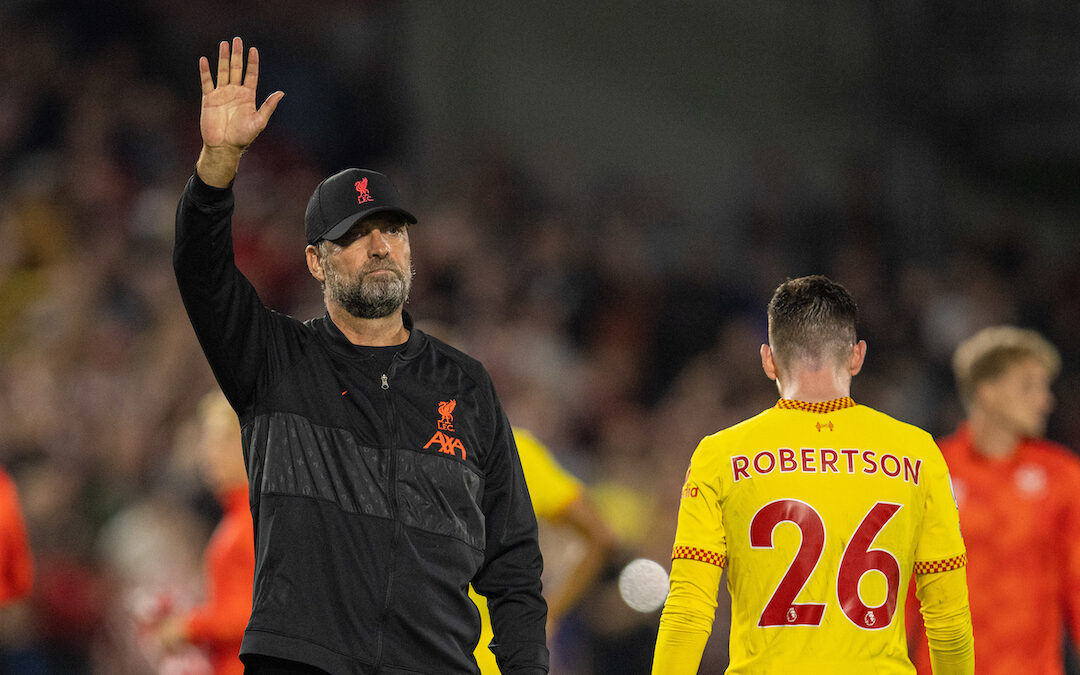 THE mental matters. The perception matters. That one hurts. It is two dropped and it hurts.

It’s the worst type of two dropped. Twice Liverpool had the lead and twice they let it slip. The side they let it slip against are newly promoted. The way they let it slip was especially shoddy and also really rather similar. The fact they had two excellent opportunities to make it 2-4 against an exhausted side simply did not help. Liverpool dropped two and looked altogether too mortal for my liking.

Because looking close to immortal was what was on offer, frankly. That might seem an odd thing to say but any Liverpool win today backed up by victory last weekend would have sent a siren out across the Premier League not to mess with The Reds. Because if you mess with the best, the best don’t mess.

It’s a funny season. We don’t yet know who is who and what is what, but Liverpool were six points away from looking like the team to beat. One of the things about being the team to beat is that everybody takes one more breath. Everyone worries that one bit more.

Brentford didn’t worry. They had their plan and were bold and were specific about where they wanted the game to be played and were able to make it happen. They treated Liverpool as a solvable problem, they knew they would find joy and find joy they did. They had worked their pockets out and weren’t to be denied.

Ivan Toney was a problem but he would be nothing without Brian Mbuemo’s movement which was second to none. Joel Matip and Virgil van Dijk kept getting sucked into physical battles which were more about the mind than practical defending and Mbuemo found joy because of it. The mental matters. The perception matters and Liverpool fell foul.

None of it suited Fabinho who had his wobbliest game to date. Two of Brentford’s goals come from being enormous and overloading on Arnold’s area. It’s perfectly reasonable as an approach but it doesn’t take a lot of reading. Liverpool failed to read it not once but thrice.

None of that would have mattered had Liverpool made it four. The most unfair thing about being Mo Salah and Sadio Mane is that they have the hardest job in football and both did it well, the former getting a goal, but both should make it four and in failing to do the hardest thing in football they cost Liverpool the points.

This simply isn’t truly fair. Other things cost the points, other shortcomings, other issues, but their job is to do the decent thing and neither obliged.

Jordan Henderson played ever so well. Curtis Jones was excellent while being understandably subbed. Roberto Firmino’s introduction and Liverpool going 4-2-4 made a ton of sense at 2-3 and none at 3-3 which is another counter-intuitive masterpiece. But Jones and Henderson and Firmino all doing well doesn’t matter when the issues were in both boxes and they were mostly rarely in either.

Liverpool need to do it all over again next Sunday. They’ve been immortal before. But it is like playing snakes and ladders. Today could have been a ladder but we have rolled the dice and hit a snake. We will get to roll them again but we need to roll them better. Our lead can still be unassailable and soon, but it will now need to be rebuilt. The mental matters. The perception matters.

Everything we have. All we can be. Next Sunday.

Fix it. Better than these, you know. And by these I mean all, absolutely all, of these.

“It’s definitely two points dropped. Liverpool should have seen it out at 3-2 and they don’t. They didn’t learn their lesson.”

Subscribe now to listen to the full show 👇https://t.co/RZ5ckXeglW pic.twitter.com/sd1DgEKUCl