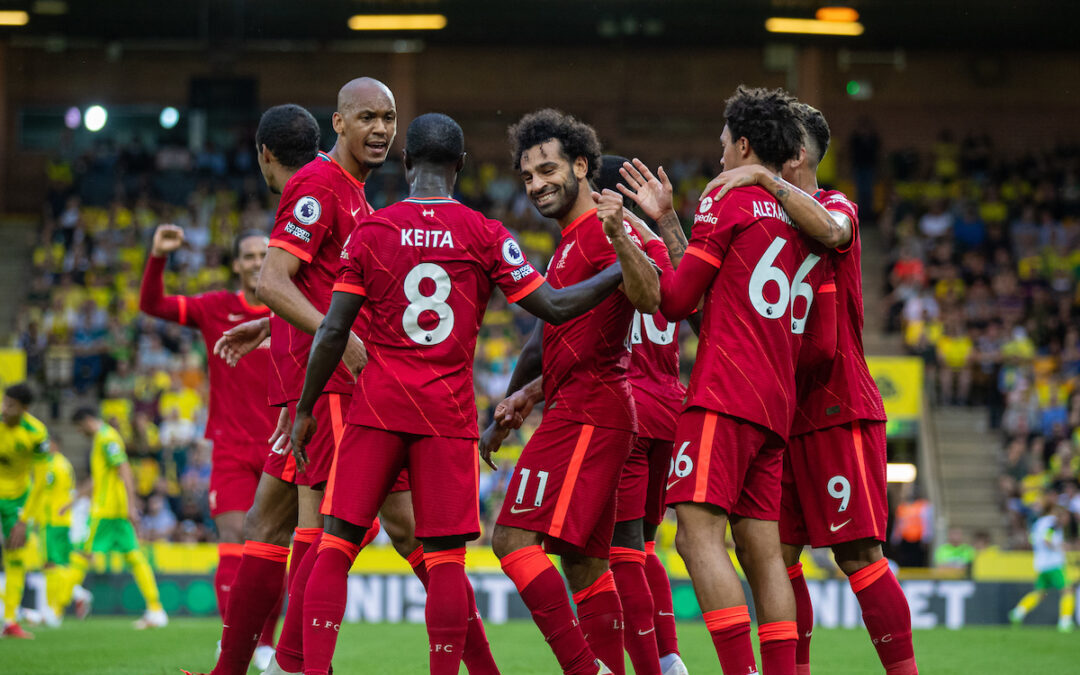 In all the ways. You can never get too much of a wonderful thing.

There is a long, long list of ways in which we are back. The first and the most important is this…

For the first time since February 2021, which was the last time since August 2018, you felt like you were watching the potential champions.

Instead today we were just watching a side which could, very feasibly, win the football league. And it felt good. A wonderful thing.

The selection was a minor surprise. It seemed inevitable to me that Fabinho would start, that Jurgen Klopp would presume that in lieu of Thiago and Jordan Henderson he was necessary. Instead that doesn’t happen and you wouldn’t be human if you weren’t worried.

Indeed, you wouldn’t be human if you weren’t mildly concerned when they dominate the first half that they haven’t made it two. It was raucous at Carrow Road but, when they go in for the break it ought to have been all over bar the shouting, it wasn’t. There was still work to be done.

The opening goal was lovely and opportunistic. It was the essence of pounced upon. Diogo Jota responds brilliantly to Mo Salah’s touch and Tim Krul is made to look daft simply because of the pounce. In the middle of the park in the buildup, James Milner found Trent Alexander-Arnold marvellously and then Arnold’s ball was a belter. But the opportunism was everything.

Norwich City weren’t mugs. I am concerned we wrote and said the same thing first weekend of 2019-20, but they didn’t seem to be quite as irresponsible. They accepted their status as the junior and responded accordingly.

They grafted and moved the ball quickly from side to side. They put Liverpool under some pressure, but in the cold light of day may feel they didn’t put Virgil van Dijk and Kostas Tsimikas under anywhere near enough. The thing is that the pair may well have been fine had the pressure been greater but Norwich go to bed not knowing.

Naby Keita kept it ticking in a manner reminiscent of Liverpool’s previous number five. Mo Salah was what he has been since Christmas 2017 – the footballer with the most vitality in English football by a mile. Jota and Firmino bag by being where they should be. Sadio Mane doesn’t quite have it happen for him but it will come.

The keeper had nowhere near enough to do and then suddenly produces one of the best and most dismissive displays of goalkeeping you could conceive of with two brilliant saves and then pats the ball away like Lorek Byrnison.

It would be this that would make me sit up and take notice were I one of our rivals. This lad has won headers, scored headers and slapped the ball clear in one on ones. When he is doing this stuff, that is when Liverpool are on it. And my word, did he do it.

It was a consummate team performance but only the first one that is required. It was as good a jumping off point as you would hope. It would be fair to expect all of our rivals to win at Carrow Road, but we had to win at Carrow Road on this day of days when they all got back in together and we managed it with what can be, broadly speaking, thought of as aplomb.

One down. Thirty seven to go. You have been watching the potential champions.

This league isn’t going to win itself.

“That can’t really have gone any better. It wasn’t easy, but every part of the Liverpool machine worked well. Not perfect, but more than enough.”