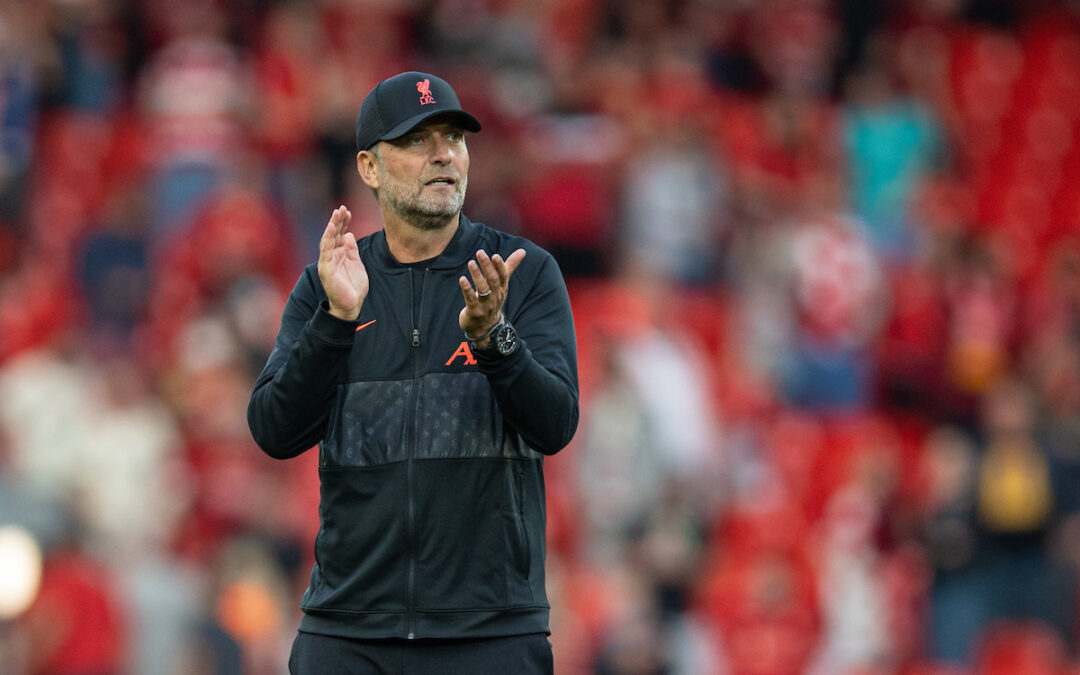 Neil Atkinson’s post-match review after Liverpool v Chelsea in the Premier League at Anfield, a game The Reds may feel they could’ve won…

They were good and it suited them in the end. But two dropped.
There is only so much room to manoeuvre over the course of any season, whatever your ambitions. Until there is genuine reason to presume otherwise this is a 95 point season for me.
And today there loads of reasons to presume it will be a 95-er. Because they were good.
They are one of the best sides at being passive I have ever seen. I thought this before today and today only confirmed it. They are brilliant at sitting, at waiting, at soaking and then, occasionally, exploding there
They are beautifully organised. They are expert in space. They are a coach and squad perfectly in harness with one another.
They aren’t perfect. Your greatest strength can always be your greatest weakness. Liverpool are poor for 10 at 0-1 and a side that doesn’t exist in a passive universe exploits it that bit more.
Liverpool instead find themselves, create chaos, get the penalty, get the lad sent and we go from there.
I have no idea about the penalty incident. I was bemused for almost everything bar Rudiger hacking at the penalty spot. And I love this.
This was my first game back. The energy in the ground and in the build up was tremendous. I am back to one view, in real time. I am back to feeling everything. Back with friends. She said it’s good to see you back in a bar band, baby. I said it’s great to see still in the bars.
God I felt it. God I needed it. God when it went 0-1 it hurt like a cut and then when it went 1-1 it felt like a plaster.
The second half was a scab to scratch at.
The selection. Elliott plays really well but the shape wasn’t right. Every player on the right wanted to go from outside to in. No one from inside to out. Jordan Henderson was awkward at times on the left. Liverpool didn’t quite function against what will prove to be the best side in Europe out of possession. Klopp may have wanted to surprise Tuchel but it doesn’t quite work.
The second half, a scab to itch at. For 15 or so Liverpool get broadly everything right. Then a lull hits and there just isn’t a recovery from it. Let’s be clear, the idea that simply not conceding is winning couldn’t suit them more. The gaps close further, the game from 65 is played on Jorginho’s terms. Going through the gears proves impossible.
The left doesn’t help. The right hand side is too narrow but lads are playing well. The left is simply under performing. Andy Robertson and Sadio Mané are wonderful players but neither gives us a 7-out-of-10 tonight and it hurts us second half.
God, I like them. I’m wrong about football, you know. I love solidity and a big man up top. I love just winning your battles and being compact and organised. I hate romance. I love shape. Shape makes me happy.
I am wrong about football, at least I hope I am. Liverpool have no interest in a big man and aren’t about bits. Liverpool are good at shape too but believe in it primarily as an attacking force. Liverpool win their battles but want more to spring forth from there.
Before the game I felt that tonight we were watching the champions and that hasn’t changed really. There is a serious chance that Liverpool have today played the best team they will all season.
She said it’s great to see you back in a bar band, baby. That’s all we are and all I ask. What’s a song without you? Every song I write is about you.
To be back is special. To see two of the best five sides in the world play is special. To be part of all of this right now is special. To have it all happen in my slightly weird, slightly small city in the north west of England is special.
Two dropped. They should have won. Genuinely they should have. But tell me it isn’t a joy to be alive. Tell me these aren’t our days of leisure.
Thirty-five to go. Every one of them is the sweetest.