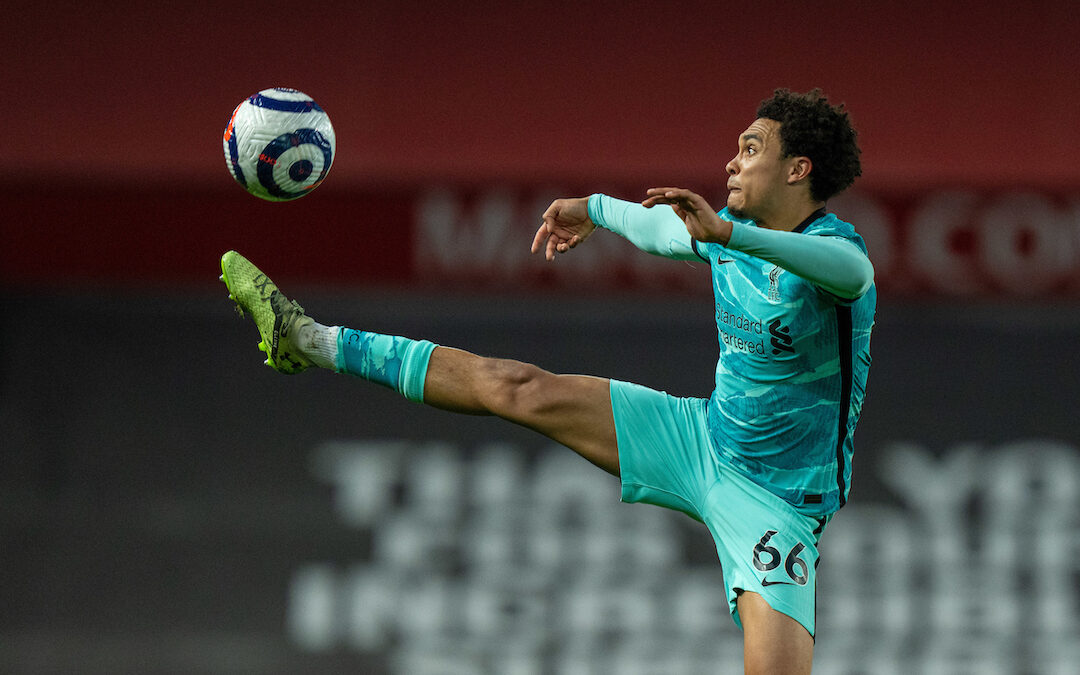 GET on Trent Alexander-Arnold.

It’s an incredible performance. He is 22 years old. He’s been an integral part of a Liverpool side which has been to two Champions League finals, winning one. Registering two 95-point-plus seasons and won a title. He’s been brilliant. Been there. Seen it. Won it.

But tonight feels like a performance which both defines and demonstrates exactly what a legendary career is ahead of him and us. He is the best footballer on the planet in his position, the footballer in the world best able to run football matches from his position.

He is the best footballer on the pitch tonight by some distance. Think about the footballers on the pitch tonight. Thiago Alcantara, Mohamed Salah, Fabinho; Paul Pogba, Bruno Fernandes, Edinson Cavani. In all facets of the game he was genuinely outstanding. He attacked brilliantly and defended bravely. His touch, his passing, his brain. My god, his brain. He sees the pitch like he can press pause, like he can sit in the stand.

There’s a chance, a good chance, we will get to see 15, 20 years of this career before our eyes and we will get more and more performances at this level and the only question is whether or not we are worthy of it.

There are patches of intense possession on both sides which fits a game in which both teams look to play a high, high tempo and both teams, even in defence≤ look fit to burst out and allow Marcus Rashford and Mohamed Salah respectively to be released and run wild at goal.

It’s an excellent win. Manchester United start the game determined to get about Liverpool’s centre backs, both with and without the ball, but especially without the ball. They back themselves to push Liverpool into errors and they are given encouragement over and over.

By the time the final whistle goes there is a lot wrong with Manchester United’s performance and it is unbelievably funny to find out how much they missed Harry Maguire. I mean, it’s tough without your first choice centre backs, lads. Yes. No doubt.

But United get ahead and they should then push. But Solskjaer’s opportunists so rarely push. They are all about picking their moments. This is why they simply don’t convince. They’ll finish this season a comfortable second, finish it with a trophy in all likelihood. But they look a million miles away from challenging Manchester City.

Twice in his career Trent Alexander-Arnold has broken 95 points. This Manchester United side doesn’t have that in its back pocket.

They let Liverpool back in. Liverpool grow and grow and by the time Roberto Firmino makes it 1-3 Liverpool are absolutely dominant. In all areas of the pitch they are the better side. Tonight Liverpool are playing their fifth and eighth choice centre backs. They look better than United’s second and third. This is what is so unlikely. These characters are second. And yet. And yet.

Manchester United will be frustrated with their midfield. McTominay, Pogba and Fred are not having their best day in the face of Fabinho, Thiago Alcantara and Gini Wijnaldum who are having a very, very good day. The gulf between Fred and Fabinho should be startling, should have people up nights.

McTominay battles in the middle of the park but he can’t get near Alcantara who has a second half to die for. He is sumptuous, certain. He knows the only reason he isn’t the best player on the pitch is because his right back is epoch defining.

The back pairing of Nat Phillips and Rhys Williams have difficult moments, especially in the opening quarter. But confidence builds through the match, and Phillips especially makes key interventions not just defensively but also attacking. They end up in a position where they can defend for their lives and that, my friends, is the only way to defend.

Roberto Firmino is suddenly on it. The header is so emphatic and he just keeps joining and joining and joining. It’s fascinating tonight. Cavani is marvellous, obviously marvellous. But the game is Firmino’s. The pitch is Firmino’s. The man who misses the crowd more than anyone finds his sheer effervescence. He isn’t Liverpool’s best forward but he is the one who makes your heart sing.

The arch of his back after he scores is the grist to all of my mills. What he does there and then is glorious. Dean Henderson makes it easy but Mo Salah makes it clear and he makes so much more clear. He wants to be the most important goalscorer for the best team in the world. He can be that again next season.

Defend for your lives. However, Marcus Rashford is determined to scoop that ball onwards and create some chances for himself, even if no one else is really doing it for him. Rashford is all there and is convinced he is going to score. He wants one back and gets it with 20 minutes remaining and it seems like the longest 20 minutes you could imagine.

The game can definitely go either way at this point. A fine balance. But that fine balance within Liverpool between defence and attack comes good for us tonight.

But 70th minute. Defend for your lives. Over the course of the evening there is a lot that both Williams and Phillips could do differently. But defending for their lives isn’t one of them. That is what they do. That scramble defines Liverpool this season, or will if they clamber into top four. It isn’t pretty but it is emphatic.

Liverpool’s passing is not perfect but it is good, and it is enough, as Jurgen Klopp points out, in the end to take control of the game. The quality in the build up to the Salah glory goal was quite something. They have it in their back pocket.

This is all a product of a Liverpool team who keep moving, a Liverpool who have the best right back in the world. They are dealing with a ridiculous burden of injury. But tonight they have shown an ability to control what they can control. Take their chances. Take their three points.

Get on Trent Alexander-Arnold. Get on Liverpool. Nothing is sorted. No one thinks that. But every step should have a spring in it.

“GETTTTT IN!!!!…. That feels like for the first time in a long time we got to celebrate goals, because the emotion just took over!