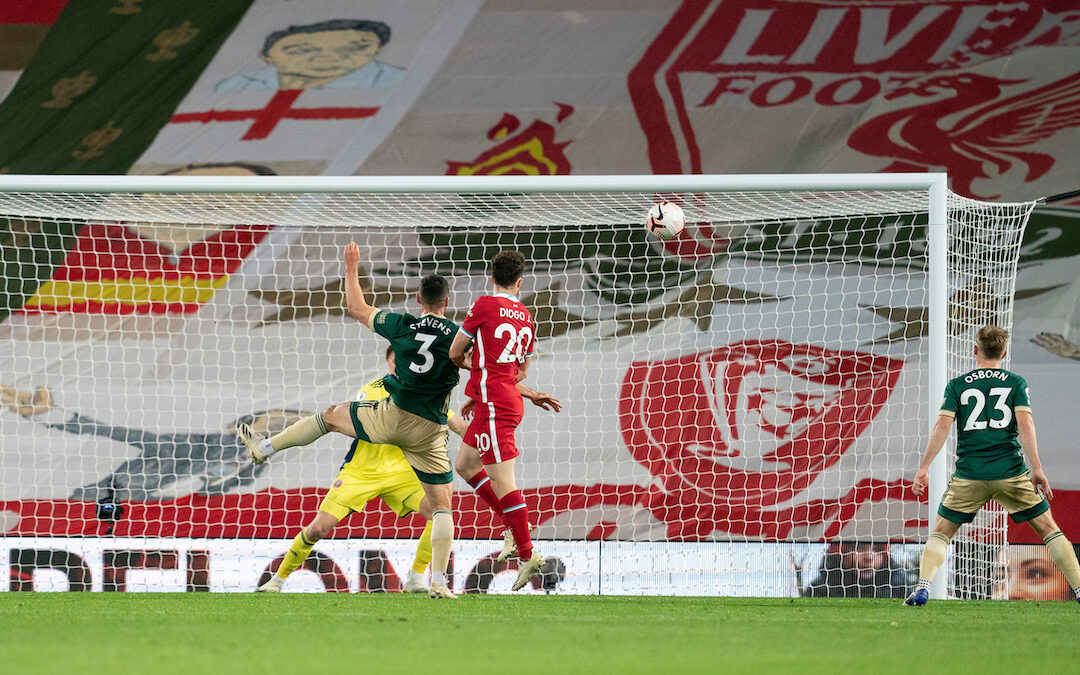 TODAY Liverpool, Manchester City, Chelsea and Manchester United all played quite poorly on the whole.

It doesn’t work like that. It can’t just end there.

And of course there is a hell of a long way to go in the whole fandango. We are only six games into the enterprise. But if you want to have a chat about 20 league titles and how it happens, part of how it happens is that a side which finds itself dead on its feet with 15 to go hangs on and ensures the decent thing happens.

I want to have a chat about 20 league titles. I’ve wanted to for ages. I’ve tried hard trying to soften you.

Sheffield United were excellent against Liverpool this evening. They were the best version of themselves. There isn’t a six out of 10 amongst them from their own personal standard.

Ethan Ampadu, Ben Osborn and Enda Stevens interchange beautifully through the game. John Egan impresses with his defending as part of a unit and as a one-on-one defender. Oli McBurnie gives Liverpool a torrid time. David McGoldrick comes on and is like peak era Pablo Aimar, finding space and probing.

Through the second half in particular, Joe Gomez is marvellous. He sniffs out danger, sweeps along the defensive line and can find a pass out of tight areas.

It’s been a big week for Gomez. He’s moved from being dropped, to a nervous first 90 seconds against Ajax, to ending this one as Liverpool’s best performer, a player who knows he can’t just beat McBurnie directly but one who has to be quicker and smarter. He has a massive say in the direction of the points.

It was a day for Liverpool’s captain to be playing. We have this man and he is an asset. The change of shape didn’t really work at any stage. At 0-1 Andy Robertson gave it away knocking it inside and gestured as Sadio Mane made a different run. Liverpool’s best partnership is Mane/Robertson. And even that was off.

Second half Jordan Henderson made it work for everyone. He was everyone’s support, constantly available, constantly moving. His heart pounding. He does brilliantly for the second goal. As does Sadio Mane, as does Robertson.

But so does Diogo Jota. Tonight, in all the ways that matter, Diogo Jota looks like a Liverpool player. First half he looks like a spare wheel, looks one man too many wherever he goes. But second he is constant and he is dangerous. He is lively. And from nowhere he is good in the air. This is a Liverpool side who improve from one half to the next, who solve problems, who are constant and who are, from nowhere, good in the air.

The issues first half come from Liverpool struggling to deal with McBurnie which comes as no surprise, but from them not being set up to win second balls anywhere which does come as a surprise of sorts. Fabinho finds it tough at centre back. He’s never quite at peace, never quite right. Doesn’t know when to stick or twist but then neither did Dejan Lovren and he is a really good central defender. It isn’t easy on the tightrope. Tip on the tightrope.

Trent Alexander-Arnold and Andy Robertson could defend better at times but they aren’t quite sure exactly what is what and where is where. You change one thing you change everything. Part of the shift from 4-3-3 to 4-2-3-1 is to save their legs but it seems to slightly increase their anxiety.

Roberto Firmino plays well and scores which is marvellous. It would be the business if he could back that up with another. I wouldn’t have started him again FC Midtjylland but now I would. The idea that he could be sitting on two from two or even better before West Ham at Anfield shouldn’t be sniffed at. We want to think Firmino – Bobby – is too cool to care about goals. Nothing could (or should) be further from the truth. He grew after the goal.

The one that Mo Salah scores which is chalked off looked for all the world like a blinder and all game Salah is so dangerous. He’s the liveliest footballer imaginable.

Andy Robertson makes his 100th Liverpool appearance. Liverpool win the game. They may just have edged it against a very well-coached Sheffield United lineup. They do have the better players and while Ajax Amsterdam took its toll they should get out of sight.

But it doesn’t work like that, either. It’s graft, this. It always has been. The purpose for the graft is the idea of the prize. The idea of the glory. And so it’s important to start saying this: 20 titles.

There is an issue.

We haven’t properly celebrated 19 titles, you and I. I haven’t held you and look into your eyes while there are 19 titles, while a bus goes around the city, while the music pounds, while the city is ablaze behind us, while everything we wanted it to be for all that time went on around us, while we clutch each other after ever so long and we gain a peace and lose one too.

But you know what? Fuck that. Seriously.

That’s what I want for us.

Twenty league titles. I’ve been waiting on you. Thirty-two more games for the best team in the country to be just that. They won’t always be just that or even simply embody that. But they will find their way. Being on the march doesn’t mean every stride is faultless. Just that every stride is completed.

Gain a peace. Lose one too.