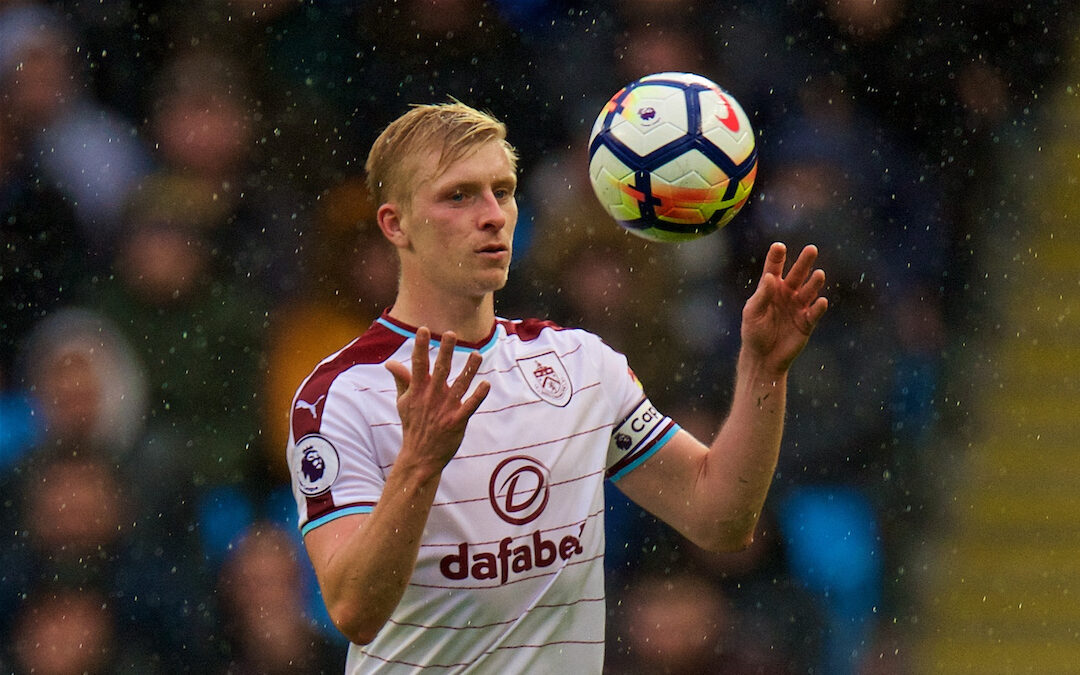 IT could prove a significant moment.

Ben Mee, straight down the barrel of the camera making clear that he and his side were both embarrassed and ashamed by the banner that flew over their heads.

Mee is absolutely bristling with anger as he speaks, infuriated as much as he is embarrassed and grabbing the opportunity to draw a line and make the point about what is and what isn’t acceptable in conjunction with the club he captains.

Burnley have been a bit of a punchline, as a place, as an idea in the Premier League for some time. Someone had tweeted a few days ago that Burnley would come out with “All Lives Matter” on the back of their shirts and I had a chuckle about that a few days ago. Then that banner is flown.

This isn’t fair. Natalie Bromley who gives her time to come on our shows tweeted about the banner that she was heartbroken. Many people who support Burnley who are connected to Natalie were the same, a couple in tears.

I chuckled to that joke because it had the ring of truth about it, then there is the banner and this has consequences and then the joke isn’t funny even in its act of being proven accurate.

That act of malice in flying that banner is calculated. It takes time to pull together. You don’t just act in the moment.

The aim of those who paid for the banner is to reject what is being done in the Premier League, led by its participants. It is a statement and it is one trying to wrest back control. To retain ownership. It is saying to Burnley, to the Premier League, to fellow supporters like Natalie, “it is our football and we will have it our way and we don’t care what you think.”

The battle within football cannot be had by black people alone. Ben Mee knows that when he speaks. The reality is this: to win that battle it is white men who are going to have to listen and having listened are then going to have to change and challenge. Therefore that is an onus which is on us all.

I type this knowing that the majority of you reading it are white men, like I am. We know our audience.

I know a small but significant number of you will bristle and I know some of you feel exhausted by the idea that seemingly every societal problem ends up with someone like me putting it back at our door. This is hard to take and it always is an awkward conversation.

The truth is that white men have looked the wrong way for far too long. I’m prepared to include myself in this, include stuff TAW has done or could have done too.

This isn’t about finger pointing and if you feel the finger is pointed here, it isn’t. It’s about self-examination. It’s about having a think, making a change and producing a challenge to those men who are determined to keep control of the game from the terraces at all costs.

And if you think this current call for self-examination is exhausting imagine a lifetime of dealing with the crushing reality of structural racism through society and even into football, a leisure activity.

We can handle this, you and I. I promise you we can.

There is a fringe through the game which is greater at some clubs proportionally than it is at others, but it is present at all and like everything there is a spectrum. There is a journey. There is a direction of travel to and from the end of this spectrum that would fly such a banner or go to London “to defend the statues”.

We have our own battles around where traditionalism becomes parochialism and then parochialism can quickly become something much more malevolent. This is the direction of travel, how the spectrum moves.

“We’re not racist, we only hate Mancs” rang out around Anfield fewer than 10 years ago. It was appalling, let’s have it right. At the very least it suggested racism was something you could play with.

It came in a period where Liverpool’s most significant living legend sent a squad out in T-shirts supporting someone accused of using racist language and most of us – me included; told you this was awkward – supported him if not the T-shirts.

We need to think about how different aspects of identity supersede one another and how we address that within ourselves and with the wider world. Let’s have a think about that and let’s definitely not be laughing at Burnley. Let’s not act superior for a second.

The language around the game’s many issues has veered dangerously into these spaces.

One of the reasons why the aforementioned traditionalism and nostalgia should be approached with caution, why the very notion of lazily being “against modern football” is actually something fraught with danger is that part of it is men, white men, who had control of this thing on terraces wanting to maintain that control.

Is that to say those people are racist? Very, very far from it. There is endless evidence that football campaigning in decades gone by was able to be at the root of fighting the far right.

It is to say that traditionalism and nostalgia are part of the slope that can lead that way and why that slope should always be approached with caution.

Someone is always desperate to make it 1991 again without acknowledging that to do that is to pretty much return us to those days lock, stock and barrel. Someone is always desperate to say that it was better in the past with the unspoken suggestion lingering that it was better then because men were men, women were indoors and you never saw black people.

The people who say that may not mean the additional connotations, they may be appalled by them, but those sentiments may well be what registers with people who hear that discourse. At the very least that sort of discourse offers validation for those who have those types of abhorrent views.

Too much of the conversation around proper football for proper fans doesn’t stop to wonder who the proper fans actually are and why the invocation of them always seems to have people who look the same. How that looks to the outside, to those who feel on the wrong side of where the line is drawn, who feel they aren’t the proper fans.

That has happened through our history, at our club, to people on a geographic, gendered and, yes, it has happened on a racial basis.

It is wrong. The proper fans are and can be anybody. Being inclusive though isn’t about simply saying it. It’s about living it as a value. It is an action, not a statement.

Our black friends need us to be allies, need us to speak across the spectrum, not to those completely lost to hatred but to some of those who feel a sense of loss somewhere.