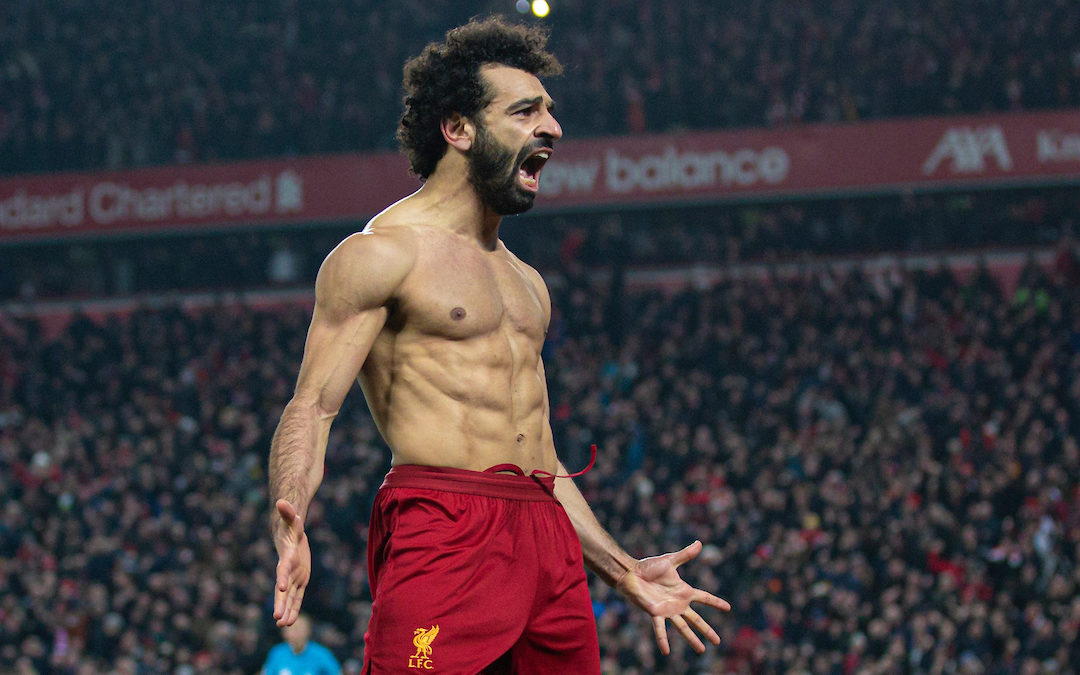 ‘BEAT everyone, and once you’ve done that, beat them again’.

That’s been the theme of Liverpool’s season so far.

After playing the other 19 teams in the Premier League once, Liverpool had beaten 18 of them.

There was just one outlier. One stubborn opposition that was able to prevent the red machine from rolling over them. Manchester United.

In recent years, Liverpool have risen to the top of world football while United have sunk down to sporadic appearances in the Champions League and to fighting with the likes of Wolves and Sheffield United in the table.

That gulf in class has rarely been seen in results between the two, though. Just as United often struggled to show their superiority in games against Liverpool in the ‘90s and ‘00s, The Reds had only beaten The Red Devils twice in their 13 games between December 2014 and January 2020. 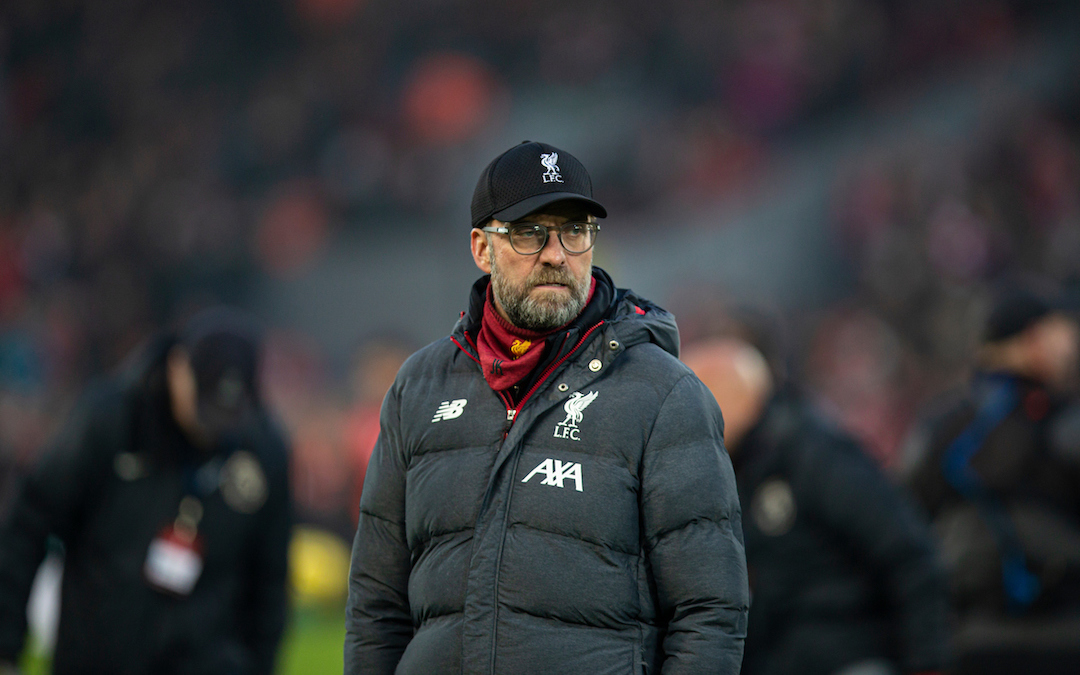 Ole Gunnar Solskjaer’s tenure at Old Trafford has been a strange one. It began in sensational style when he was in caretaker charge, leading to the club giving their former striker the job permanently.

Anyone who has ever even slightly followed football knows that nothing causes a more immediate downturn in results than giving a caretaker manager the job permanently. It would be safer to instead put a wheel of cheese in temporary charge (no obvious ‘Ole’s at the wheel of cheese’ jokes, please).

The perception of United’s season hasn’t been helped by the black and white way in which fans and the media view them. It was the same at Liverpool prior to their resurgence, and is broadly the same across most big clubs, but in particular at United.

Lose a game to a superior team and the end is nigh. The club is rotten from top to bottom. The players are a disgrace, the manager is out of his depth and no one is fit to wear the shirt.

That is, until they beat relegation fodder 2-1 at home and are immediately on course to dominate English football again.

It does make for big numbers on social media and YouTube, but it also makes it difficult to have a proper conversation about them and predict what they’ll do next. 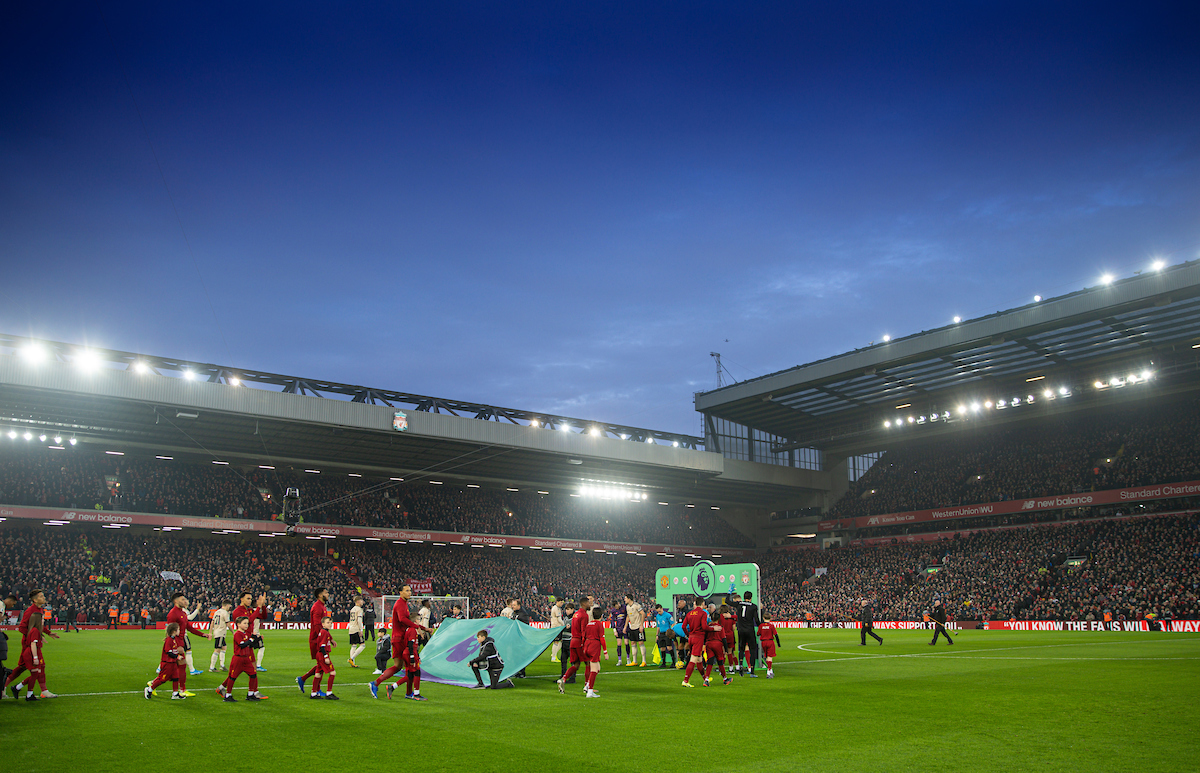 When Solskjaer brought his side to Anfield in January, they remained the only team to not lose to Liverpool in the league this season. The story was set. Could they do it again?

Liverpool had the whiff of a Premier League title in their nostrils, and set about their business of claiming the three points that they felt belonged to them.

The first half was, frankly, ridiculous. Liverpool outclassed United in a way that had rarely been seen in this fixture. These were so often tight affairs with very few clear-cut chances, but the hosts set about trying to thump their opponents from down the East Lancs Road.

Virgil van Dijk rose to nod in the opener on 14 minutes, a routine goal from a corner that caused bafflement as to how the most dangerous man in red in the box could have so much time and space to get his head to the ball. The Dutchman’s celebration included a sideways glance to the despondent away end before a leap and fist pump in the red winter sky.

Liverpool weren’t done there, though. Roberto Firmino expertly curled in another, only for it to be disallowed after the event when the VAR adjudged that Van Dijk had fouled David De Gea in the buildup. It was probably the right call, but it was rare that a referee who had seen the incident clearly had then allowed the VAR to tell him that he got it wrong.

After Firmino had missed a good chance from a Mo Salah cross, a glorious move between Andy Robertson, Firmino and Alex Oxlade-Chamberlain saw Gini Wijnaldum played in, and he slid the ball into the far corner. However, it too was ruled out for offside against Wijnaldum.

That didn’t stop Liverpool as they burst forward again, with Mo Salah playing in Sadio Mane, only for the Senegalese’s effort to hit De Gea on the shin and spin just wide of the post. But for some fine lines, The Reds could have been 4-0 up at the break, and that scoreline would not have flattered them.

The second half started much the same, with Salah somehow skewing the ball wide from point-blank range after being set up by Robertson, and then De Gea making a magnificent save from Jordan Henderson to turn the skipper’s left-footed effort onto the post.

Somehow, despite being pummeled for 65 minutes, United were only a goal down. When they finally managed to get a foothold in the game, it gave them hope of stealing something.

They enjoyed a good spell of possession, and nerves started to creep into the Anfield crowd, who had seen United take completely undeserved points away from here more than once in recent times.

Their big chance came when a neat move on the left saw Anthony Martial with space inside the penalty area, but the Frenchman’s shot sailed high into the Anfield Road end.

Mane had a chance to seal it after Wijnaldum worked the ball past Harry Maguire with such majesty that the England international should really have just left the field. Wijnaldum slid the ball to his teammate, but Mane’s effort rolled agonisingly wide.

The nerves were still there in stoppage time, especially when United won a corner. Eventually, the ball ended up in the warm bosom of Alisson Becker. An audible sigh of relief was heard throughout the ground. 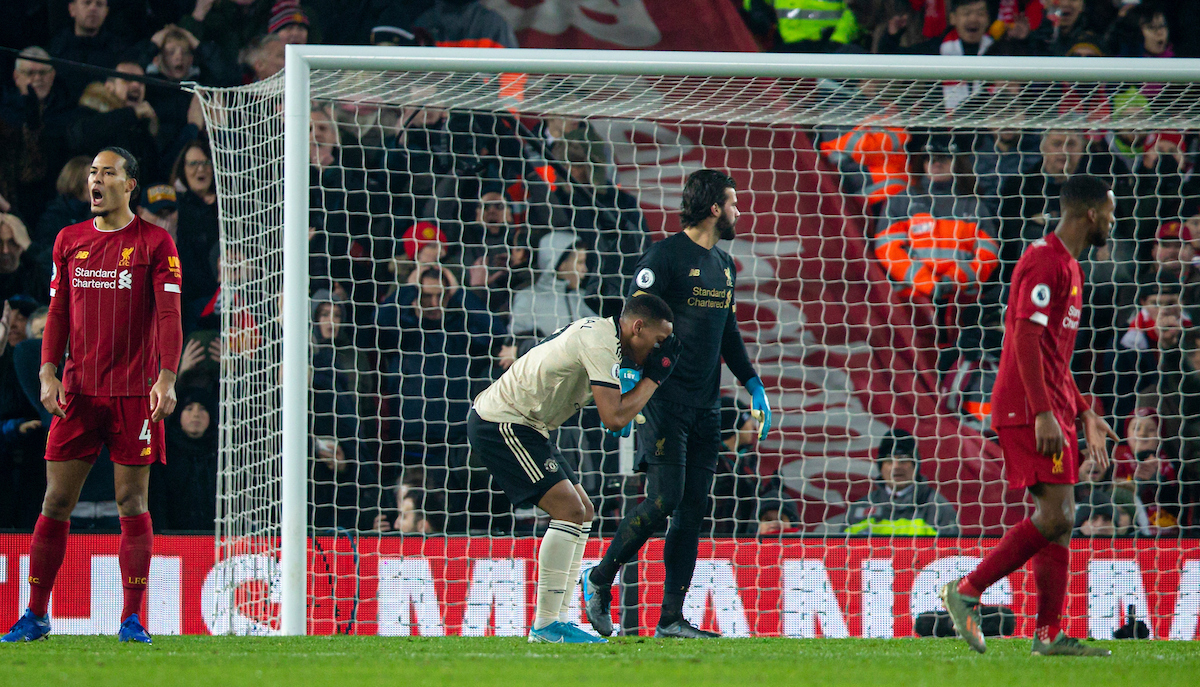 That sigh soon turned into whatever noise is made by a collective “‘’ang on a minute” as Becker launched a long ball forward.

The Brazilian’s quick thinking released Salah, who was bearing down on De Gea. The rapid Daniel James caught him up, but was unable to stop the Egyptian from getting his shot away.

Salah had scored many goals for Liverpool since moving from Roma in 2017, but never against United. He was always either thwarted by De Gea or just wonky finishing, as had happened earlier in this game.

This time, he made no mistake. The ball rolled under De Gea and into the net. Two-nil. Game sealed. Shirt off. Kop roaring.

The goal mollified the crowd’s nerves. A game sealing goal accompanied by an emotional celebration.

If I had a physique like Salah I’d whip my shirt off to celebrate winning a coin toss, but the former Chelsea man only saves such exuberance for major goals. He considered this one of them. 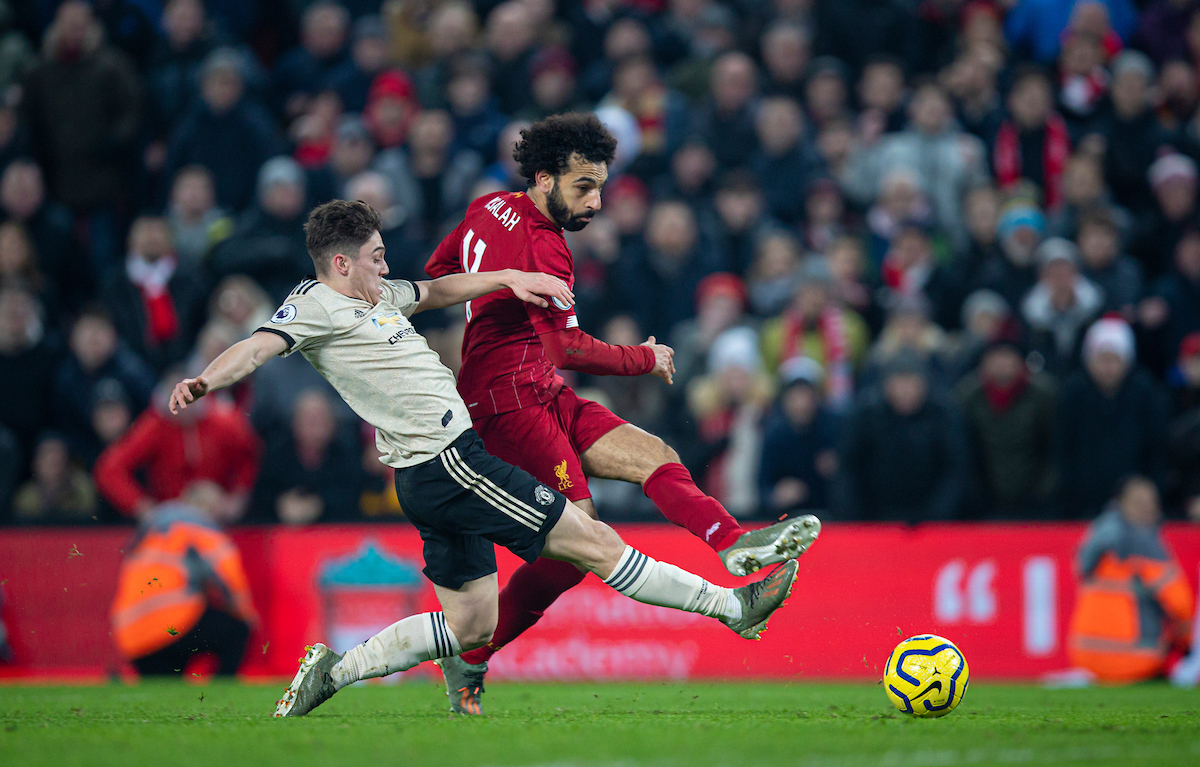 He wasn’t alone. It was one of the biggest let offs of the season as the fans realised the game was done.

The man who had created the chance mirrored former Liverpool goalkeeper Pepe Reina as Alisson ran the length of the field to be the first to celebrate with his teammate in a big embrace.

It should not really have been so dramatic at the end. Salah’s goal should have been to add to the humiliation rather than to seal a narrow win against a team that had been emphatically undressed for most of the game. The important thing was the win, though.

Following this victory, Liverpool had taken 91 points from the last 93 available to them in the Premier League. They also became the first team since Arsenal in 2001-2 to score in their first 22 Premier League matches of the season, and it was their seventh consecutive clean sheet in the league. The first time they had managed that since December 2006.

It was clear that the record-smashing Reds were the best team in the country, but this win over United felt like a final hurdle for them to jump as they headed for the home straight and towards the title.

Liverpool jumped it with style.

📱 Subscribe here for all of our immediate post-match reaction 👉 https://t.co/XZAK9veWt7 pic.twitter.com/AzdJesegRK