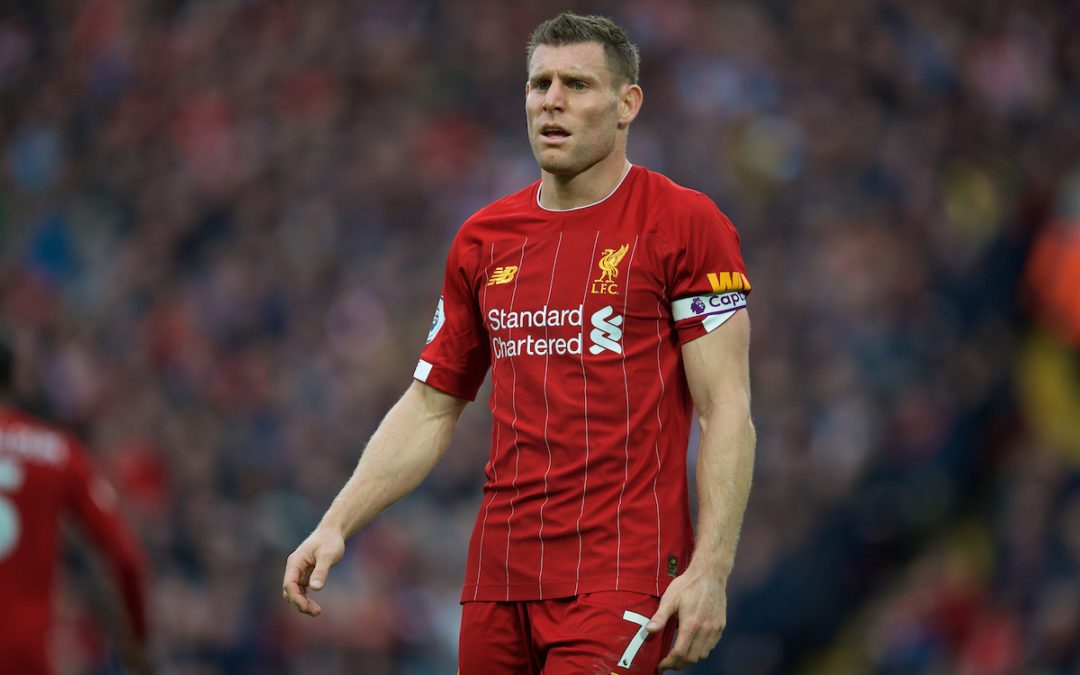 THE home stretch, the final frontier, the time to bring it home.

We’re now at a period in the season that’s born for leaders, for inspiration, for players to come to the fore and for examples to be set.

It is exactly why James Milner remains so invaluable to Jürgen Klopp and Liverpool.

Once the youngest goal scorer in Premier League history, he is now the trusted aide pertaining to all aspects of the club.

From the Anfield dressing room to the training ground at Melwood, to the academy setup at Kirkby, his presence and role-model status reverberates throughout.

Indeed, Milner embodies what is so special about the Champions elect. A model professional whose selflessness sees him sacrifice his own interests for the common cause, filling in wherever he’s needed most.

“There are players who are better technically, yes. Quicker players, yes. Players who head better, yes. But show me one who does all the things Milner does well. There isn’t one.”

That was Manuel Pellegrini back in 2015, eulogising about the depth and breadth of Milner’s game that make him such a valuable player to have in the squad, as recent years have shown.

A stand-in full back, winger, number six and eight, the 34-year-old has become Klopp’s dependable lieutenant. He’s even become quite the social media whizz and lover of hashtags. Not to mention his Ribena game.

Milner’s declaration that “individual players don’t win titles no matter how good you are as a player,” and that “it is about the team, and playing for the badge,” perfectly mirrors the foundations Klopp’s Liverpool are primed on.

Every player is responsible, each of them working together in perfect symphony, focused on the same goal rather than individual triumphs.

Should the Liverpool manager be likened to any one of his current players, it would be Milner himself.

The former Leeds youngster’s never-say-die attitude encompasses the ethos of the runaway league leaders; an unrelenting, athletic force of nature that continues to defy the confines of age and the perpetual motor within Klopp’s mentality monsters.

Such qualities are invaluable at this stage of the campaign, serving as an example to his teammates about the attitude and application required to end the 30-year wait for a title.

Anyone who has followed Milner’s career closely won’t have been remotely surprised by his pre-match call to arms in the warmup against Bournemouth, for it is synonymous with the natural acumen he possesses to take emotion out of the equation.

“Those reactions straight away. As soon as we lose it, bodies around it. Everything we do, highest tempo. It doesn’t matter the score; we lift it again.”

A player who demands nothing but the best from himself and those around him, his quest for perfection lay at the heart of Saturday’s hard-fought contest.

It was, in many ways, his contest.

A contest that paid homage to James Milner the grafter. The workhorse. The gnarly individual who keeps everyone honest. The player with a remarkable footballing brain.

And the player who made the most decisive contribution.

Just as he’s so often been when games threaten to unhinge, Milner was the man to keep it all sewn together.

He’ll be the first to admit he could’ve tracked Ryan Fraser’s initial run better, such is his mentality, but the tenacity shown to sprint back 35 yards and perfectly judge the trajectory of the ball on the stretch to ensure maximum points were retained illustrated what he’s all about.

A manager’s dream, the 34-year-old will always leave it all out on the pitch, giving everything for the cause.

He is the man who sees the big picture. The clear mind among the chaos. The voice you need when trepidation takes over.

Albeit having played just 700 minutes so far this season, Milner’s presence will be invaluable in the weeks to come, adding the necessary experience and knowhow to help maintain Klopp’s standards.

Whenever he’s asked to do a job, whatever or wherever the job is, he does it and he does it well.

He’s the timely metronome helping to drown out the symphony of chaos as we begin the final stretch.