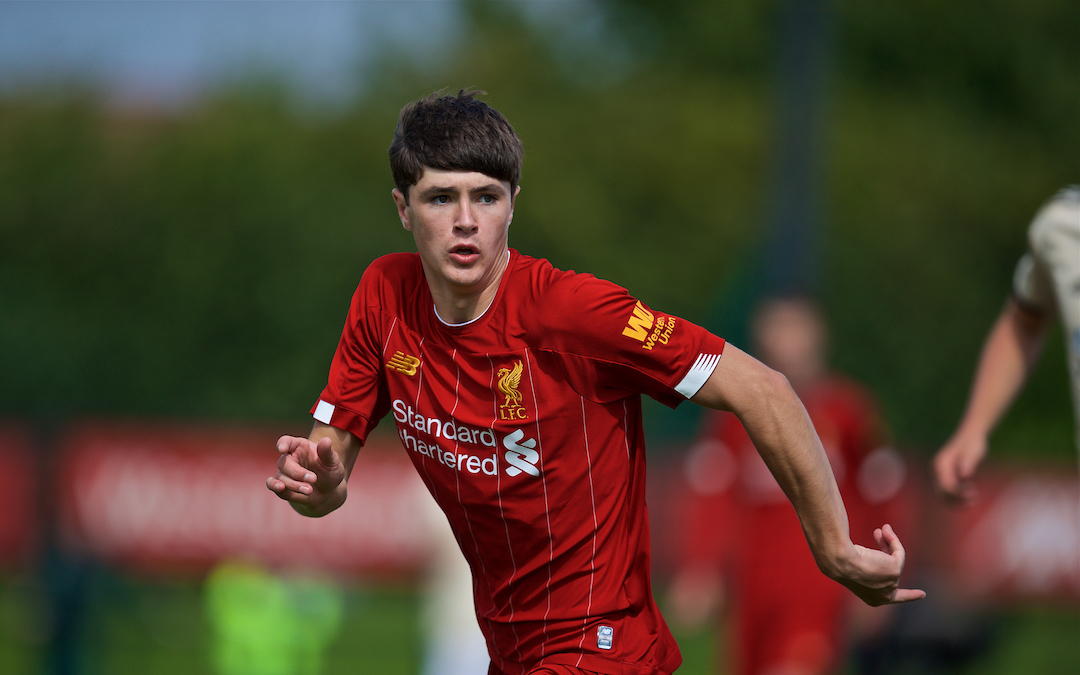 THIS season, we’ve seen some of The Reds’ youngsters feature heavily in domestic cup competitions.

Amid that however, Liverpool have been short of options in the striking department at The Academy.

Say what you like about him, but Bobby Duncan’s return of an impressive 32 goals in all competitions formed a massive part of an exciting year for Barry Lewtas’s U18s, helping them to a second-placed finish in the league and a dramatic FA Youth Cup win.

With Paul Glatzel suffering an unfortunate injury in pre season, the club had been linked with a number of replacement strikers for Bobby Duncan – Joe Gelhardt the name that kept popping up at one time.

However, with a number of lads advancing on from the U16s over the summer, it posed the question whether Liverpool actually needed to look for a replacement from outside the club’s books.

Layton Stewart is one of those lads to make the step up, having been with the club since he was seven, and at 17 years old, the Knowsley-born number nine has shown he, like Duncan, has a keen eye for goal.

Since Stewart has been drafted into Lewtas’s plans, he’s so far featured in 11 out of the 13 league games this season, grabbing an impressive 11 goals and four assists in the process.

After a confident start to the season, the question was whether he could keep up his goalscoring form and continue it into the latter half of the season. So far, he’s doing so perfectly. 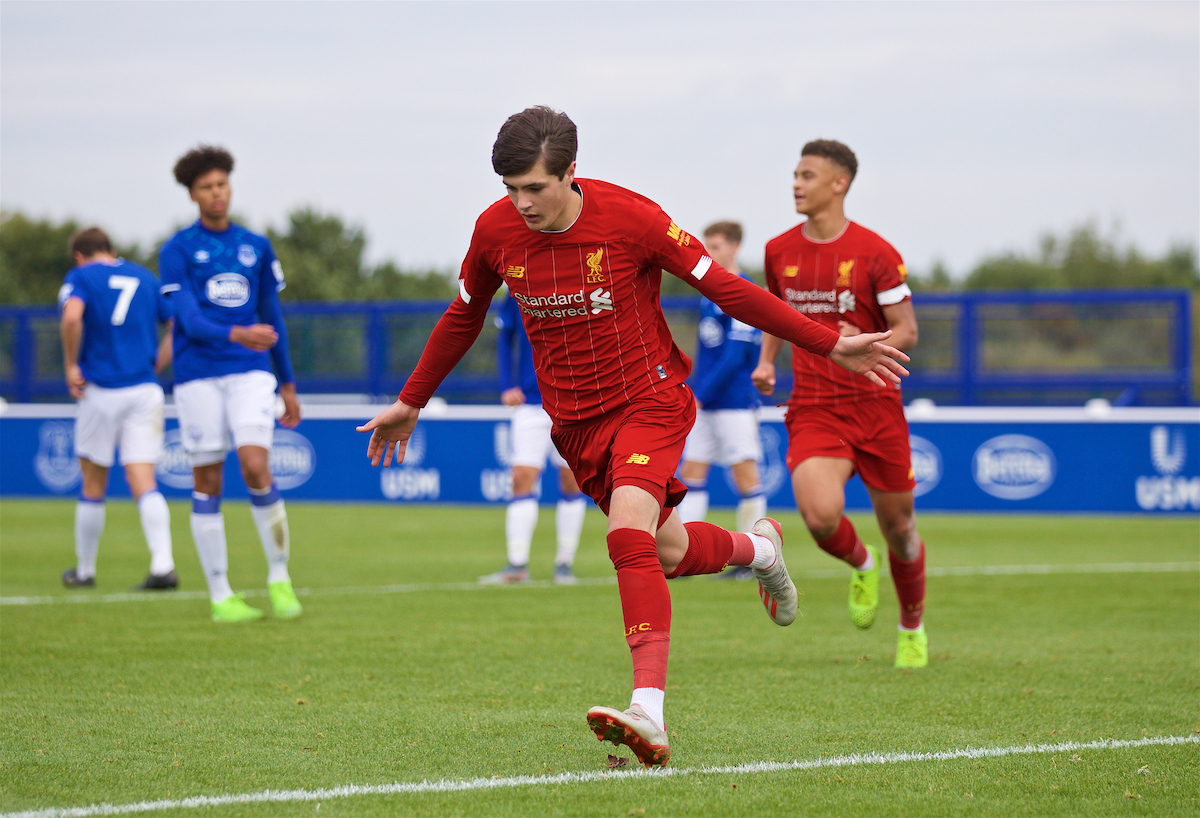 Lewtas’s exciting side have continued from where they left off in the last season, with his side scoring in every league fixture so far this season.

Stewart has definitely been a big part of this, rising above all expectations and being a threat whenever the ball is at his feet.

He doesn’t shy away when it matters either, be it a sublime chip over the keeper to grab the three points late on against Stoke in the Young Reds’ first home game, or a slotted strike from 12 yards in the mini Merseyside derby two months later.

Stewart also had a big hand in the late 4-3 win over Manchester United back in August, with a goal given to him by the club website which was however awarded as an own goal from opposition full back Reece Devine by the Premier League.

You’d expect him to claim it for himself though as his determination shines through in his play, never giving up on a loose ball, or shirking a challenge – even being one of the first to get stuck in during the post-match skirmish following that United game.

In a recent interview with LFCtv, Layton spoke of his desire to push on saying: “Klopp being an intense manager as he is, you’ve got to adapt because that’s where you want to be.

“It’s a big confidence boost for me to know that Jürgen’s giving young lads a go, it helps me want to push on and actually be around with the first team.”

He can clearly handle himself, and it may be that mental edge that separates him from the rest. A number of his U18s teammates were involved in the League Cup game against Aston Villa, and Stewart will be hoping for more than an unused substitute role next time around. 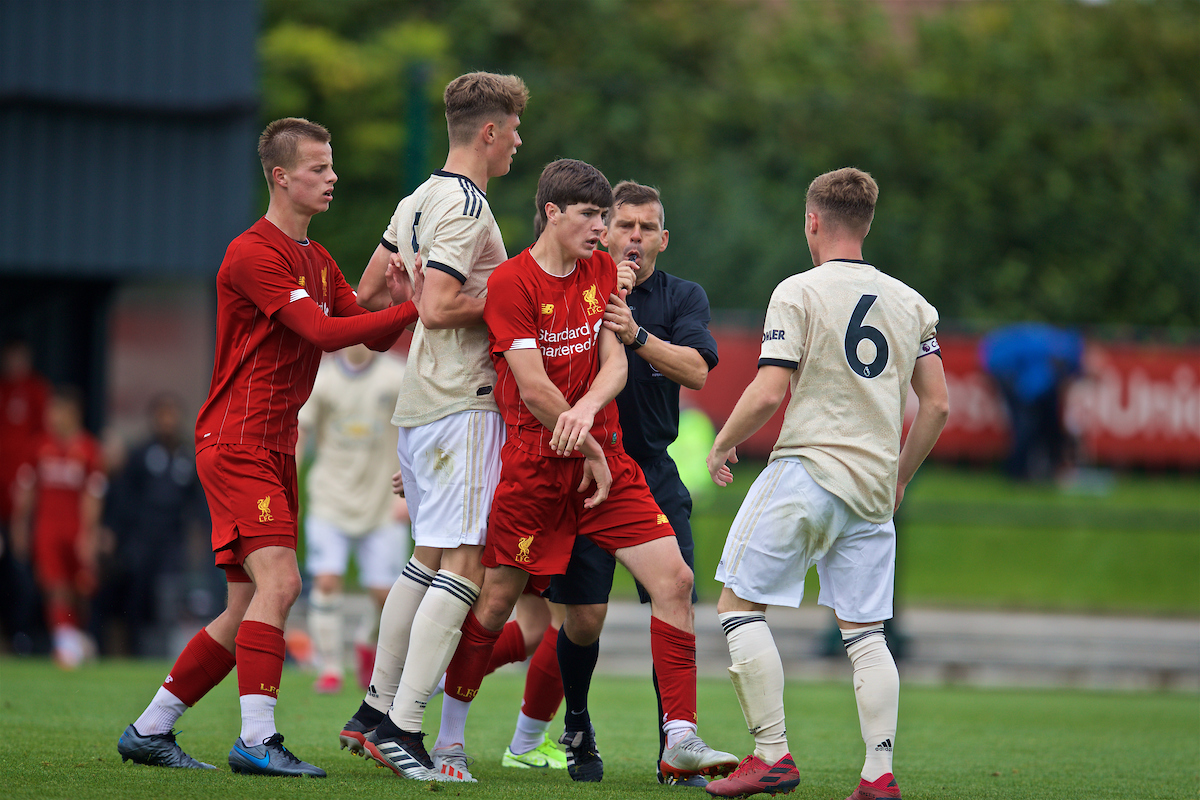 As a local lad, the dream will be to replicate the path which Trent Alexander-Arnold took, and to play at Anfield is of course the dream of any boyhood Liverpool fan, but it will take more than a scouse accent to be able to break into the first-team picture.

His confidence is certainly benefiting him on the pitch with a recent hat trick against Sunderland. Stewart’s first was something to get excited about, with a composed chip over the keeper, but it was his last-minute stunner which proved to be the icing on the cake.

It’s no longer a shock to anyone when Klopp starts any of the younger lads this season, and he has every right to after they eased past a full-strength Everton side in the most recent Merseyside derby.

With the kids looking certain to play a part once again in the FA Cup fourth round replay against Shrewsbury, Stewart will surely be licking his lips at the chance to make his first-team debut at Anfield.

Last season, the partnership of Glatzel and Duncan impressed regularly, resulting in both being given an opportunity to feature in the first team’s pre-season programme.

If Stewart can continue his fine form, and perhaps more crucially show that extra mental edge, it would be no surprise to see him making similar steps.

“I was really proud of the boys and the performance.

“The scoreline didn’t reflect the game.”